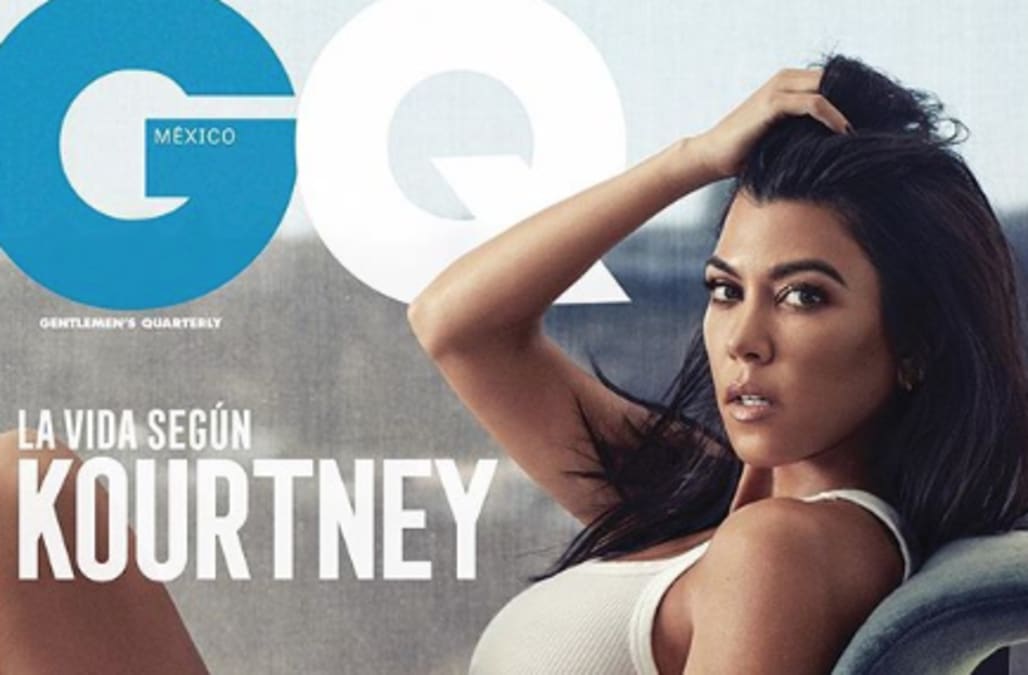 Kourtney Kardashian is GQ Mexico's cover star for its December/January issue, and the mother of three has never looked better than in the accompanying cover shoot, which she helped to unveil on Instagram on Monday.

The issue features two covers: One shows Kourtney wearing a simple white leotard as she sits on a chair, while the other shows her slouching in a pair of unbuttoned blue jeans and a blush Calvin Klein bra. It's the rest of the photo shoot, shot by Michael Schwartz, that leaves little to the imagination, though.

The "Keeping Up With the Kardashians" star poses completely nude in two shots, one of which is reminiscent of her famous nude photo shoot from her family vacation to Costa Rica from a few years back. The oldest of the Kardashian sisters dons a variety of lingerie for the rest of the photos, which put her impressively fit physique on firm display.

See some of the photos in the gallery below:

Kourtney Kardashian's sexiest Instagrams of 2018
Coparenting
🍴
Behind the scenes from my shoot for @gqmexico and #GQLatinAmerica December/January covers. On newsstands today.
@gqmexico
Muchas gracias @GQMexico for the two December/January Issue covers. @gqmexico #GQLatinAmerica Photographer @mschwartzphoto Fashion Editor @fernandocarrillo Styling @deborahafshani Hair @andrewfitzsimons Makeup @miyakemakeup EIC @urbanohidalgo_gq
@gqmexico
People’s Choice Awards thank you, thank you
can’t wait for tonight
sister date
sometimes you need a day away, pics by kenny
saturday night live
👼🏼
cat in the hat
sometimes i take all the shine
¿hablas español?
wanna 🚲 ?
sweet sunday 🍭
detox
thank you for all of my birthday wishes
Smiles all day shooting the new Fall 2018 @calvinklein underwear & jeans campaign with my sisters. #ad Join Our Family. #MYCALVINS Go see more at www.calvinklein.com/mycalvins photo by @willyvanderperre
phone calls with boo bear
🧚🏼‍♂️
I love @myblanquil weighted blanket. Use my code KK20 for 20% off #ad
i’m real, i promise
don’t be shady, be a lady☀️
yep, more focaccia
just finished my daily basket of focaccia...hbu?
what’s mine is yours
buongiorno
la dolce vita
💙
Hrush cropped Larsa out
photo by mason
✨
ethereal
KOURT X KYLIE collab is now restocked! #currently wearing MA$E on eyes from GREEN Palette mixed with PINK palette and FRENCH KISS on 👄
thank you for all of the love and support on our KOURT X KYLIE collab! ❤️RESTOCK today at 3pm pst 😊
KOURT X KYLIE kyliecosmetics.com
KOURT X KYLIE 😋🤪😬kyliecosmetics.com
@vmagazine #KOURTxKYLIE 4.24
@vmagazine shoot, wearing Matcha eyeshadow and French Kiss velvet lipstick from my @kyliecosmetics #KOURTxKYLIE collection launching 4.24
Wearing my #KOURTxKYLIE @kyliecosmetics collection for my @vmagazine shoot. Go to VMagazine.com to see all the photos and shop my collab with Kylie on April 24 at 3pm on KylieCosmetics.com — Concept, Creative Direction and Hair: @andrewfitzsimons Photography: @gregswalesart Styling: @danixmichelle Makeup: @patrickta Interview: @raf_london
KOURT X KYLIE 4/24 I am so excited to announce my collaboration with @kyliejenner 💋 We have been working on this for a year...3 mini eyeshadow palettes and 3 lips..I am wearing Matcha on my eyes and RAD on my lips. Happy Birthday to me!
#yeezyseason7
Reckless 🌴@FashionNova #ad
you got green on your mind, i can see it in your eyes 🐢
my sibling
Honey Ryder
😎
sporty spice
#mycalvins #ad @calvinklein
pizza party
Goodnight, Kyoto ✨🌙
no smoking
superhero pants 🎟
shake it baby ! #ad The perfect meal replacement from @flattummyco and it only takes me 30 seconds to make! I’m obsessed with the results. PS: They’ve got a 20% off sale happening today!
v ❤️day
Valentine’s Day 🌹
Punta de Mita travel diary : on my app 🌴🌺☀️
mujer feliz
it’s the simple things
fitness week, on my app 🌿
Up Next

The headline for the cover story translates to "Kourtney Kardashian to close the year as it should be," which speaks for itself.

Fans of the reality star will recall that her younger sister, Kim, called her "the least interesting [sister] to look at" on a recent episode of "KUWTK." Something tells us she's eating her words.