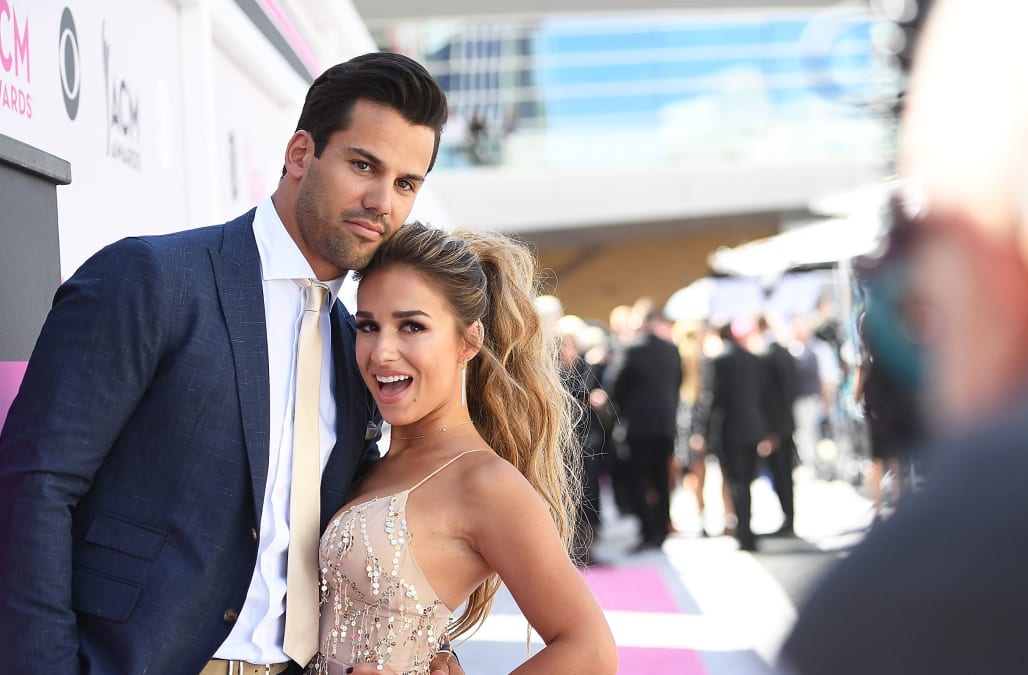 There’s nothing like traveling with kids! Chaos erupted shortly after Jessie James Decker boarded a Southwest flight with her children Vivianne, 4, Eric Jr. and 7-month-old Forrest on Wednesday, November 21.

“First we kept getting in trouble from the flight attendant for how many kids we could have in the rows and we truly were confused and kept doing musical chairs and I don’t think we ever got it right,” Decker, 30, wrote in an Instagram post on Wednesday. To make matters worse, Eric Jr., a.k.a. “Bubby,” threw up all over himself!

“Forrest was the squirmiest wormy because he wants to be cool like his big brother and sister and refused to sit still,” the country singer revealed. Decker noted that her family was not popular with other passengers.

“Pacis dropping, bottles rolling under seats and people rollin eyes, but hey we made it!” the Kittenish clothing designer wrote. While many parents would be in tears, Decker managed to laugh it off.

“All n all wouldn’t change a thing,” she explained. “Love these babies! Let the Thanksgiving week of gratefulness begin.”

Jessie James and Eric Decker's children
My little princess! Let’s dance the night away!! 🕺🏽💃🏽
Happy 4th pic! ( yes I’m a day late) Trying to get them all to smile and take a pic when all Viv wants to do is get back in the water so she appeased me with that look 😂 ( yes Vivi painted Bubby nails red...very festive of them )
Supporting my children take on new challenges and seeing the GROWTH from each experience (whether it was a great result or not) is the most rewarding feeling. Proud of my bubs! He always has the most infectious smile 😁😁
Gangs all here!!
My handsome guys with their matching furrowed brows
#tbt popsicles and sunshine are good for the soul!
Kids do funny things... I looked at the staircase and there was bub putting stickers all over his face living his best life
Hey guys! So this holiday season, @ebay and I are giving back by creating a list of 12 hot toys that kids will love. Enter to win all of the toys in this bundle and ALL the proceeds go back to @savethechildren! Link in my story to enter to win all these toys for your loved ones #ad❤️❤️❤️
On Veterans Day, we honor the women and men of our military for your service and sacrifice and thank our many Deckers Dogs supporters. We are proud to announce we have donated $75,000 to Freedom Service Dogs to continue our work in providing life-changing service dogs to veterans. In the past two years we have donated $250,000 to FSD to not only train the dogs but to underwrite the costs of the training “apartment” where they learn how to fine tune their skills. These highly trained dogs help our veterans live without the boundaries of the visible and invisible disabilities they returned home with. These young men and women are often spouses and parents, the Deckers Dogs not only support the veteran but the whole family as they are able to again participate in family life. Our eighth dog Cipher graduated in 2017 with Jessica, a former U. S. Marine. He is helping her with her PTSD and has already made a huge difference in her life and her young son’s life. Yall please join us this Veterans Day and help us provide these amazing service dogs to more veterans in need. Click the link in my bio for my information
Happy Halloween from the Deckers!! We did our best to get a family shot! Lol
Bubbys smile is contagious
Thanks @southbeachdiet for a beautiful evening celebrating my new book #justjessie ❤️❤️❤️
Mornin my sweet❤️
Donuts for breakfast!! This sweet angel was given the Kind Act award yesterday at school in front of all her peers! She continues to provide a helping hand to her teachers and classmates without being asked. She constantly amazes me with her big heart and leadership at home and school. Needless to say, I am a very proud daddy!! ...and now I’m emotional and wanting another princess @jessiejamesdecker haha
Eat your greens!! #chunkymonkey
Teamed up with @AveenoUS because life with 3 kids can be full of #messymoments...but it’s also full of sweet ones like this! Can you tell we love the new #AveenoBaby Hand & Face Wipes 🙌🏽
Saturday morning vibes
Girls away, boys will play!! Football, leftovers and no showers! (Shirts are optional)
Resting Bubby laying on his baby brother cookin in the oven. This is a good Mama right here. Lucky to have her as the mother of my children.
Love my morning hang time with this chocolate milk loving, shrek watching big boy!
Doesn’t get better than this!!
Morning mommy
Y’all I found a new lifesaver for all our #messymoments! I teamed up with @AveenoUS because I’m OBSESSED with their new #AveenoBaby Hand & Face Wipes! They’re so gentle on my babies’ sensitive skin 🙌 I never leave the house without them now.
Happy birthday to my little princess!! You amaze me more and more every year. A compassionate, silly, FIERCE, smart, adventurous girl with a heart of gold! Love you to the moon and back Vivianne Decker ❤️❤️
Someone REALLY loves their momma!!!!
Told the kiddos we could go camping before mommy got home - they packed for a week! 🤣😂
Scrolling thru my photos and had a double take thinking this was a baby pic! #fbf #minime
Up Next

Last month, Jessie opened up to Us Weekly about life at home with her husband, Eric Decker, and their little ones. “Having three toddlers running around is just so much fun,” the Eric & Jessie alum told Us. She also gushed about her rock solid marriage to the retired pro football player. “We just love to lay there and look at each other, and just think about the first time we met seven years ago,” she said. “We just feel so fortunate.”