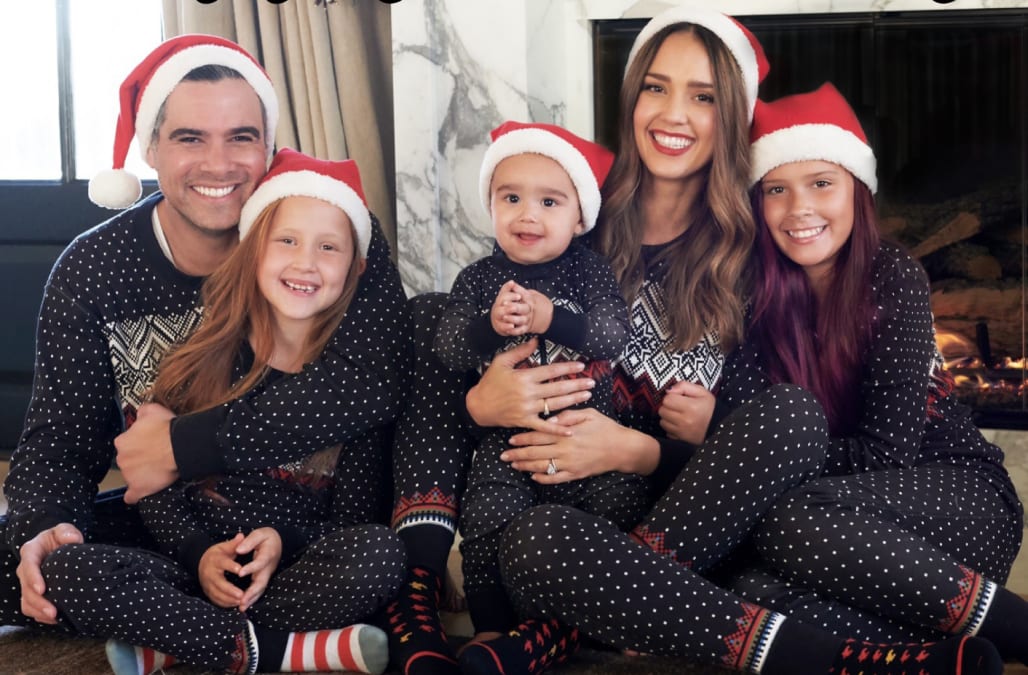 Happy holidays from Jessica Alba and her family!

Alba unveiled her family's 2018 holiday card, which she made with Shutterfly, on Tuesday, which is the family's first as a family of five after welcoming son, Hayes, back in January. The adorable photo shows Alba, husband, Cash Warren, and their kids -- daughters Honor, 10, and Haven, 7, and son, Hayes, 10 months -- posing in matching pajamas and Santa hats. 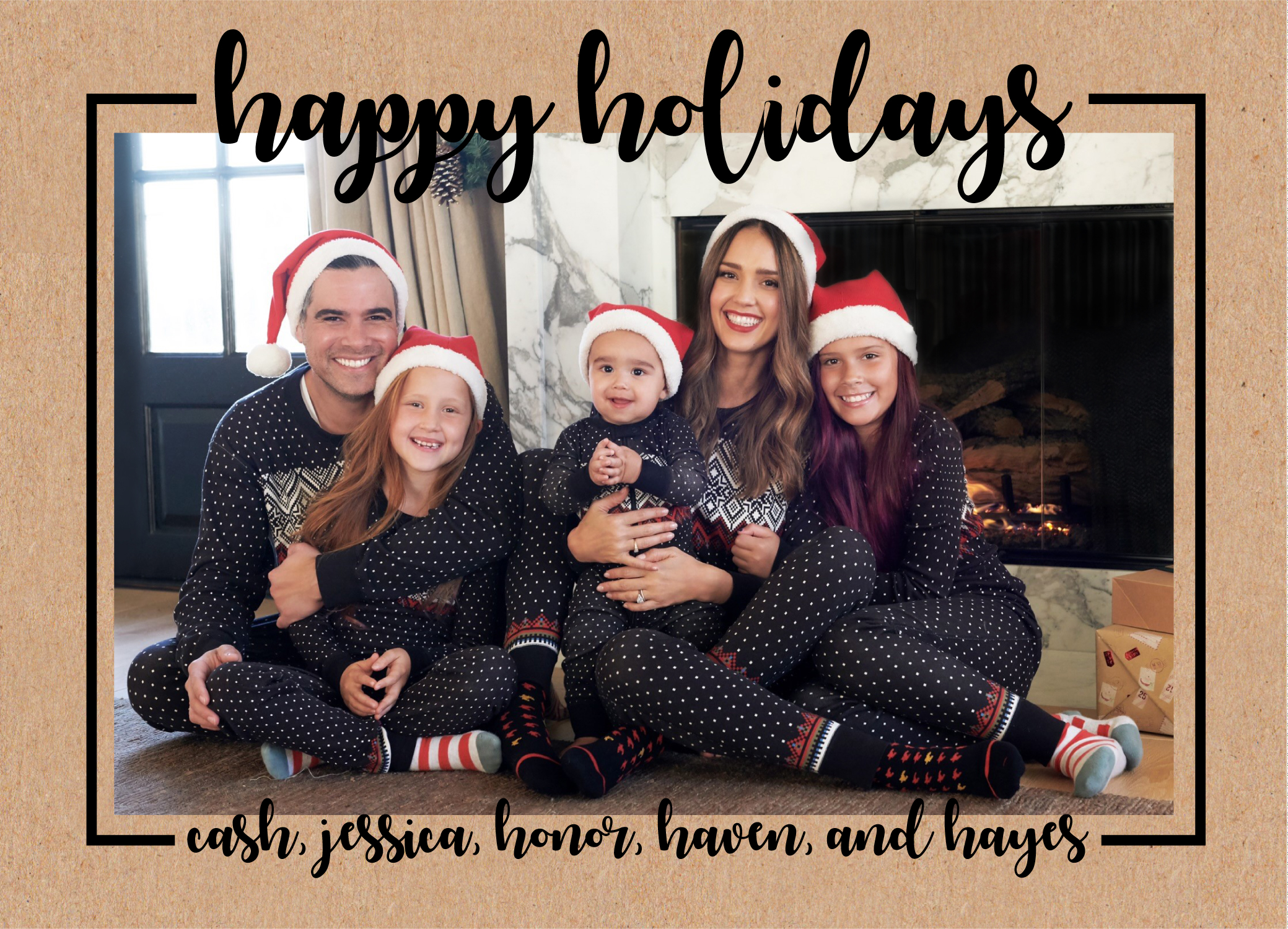 The matching PJs were all Alba's idea, she told AOL during a recent phone interview, and they stem from a long-running family tradition that she's had since she was a kid.

"I grew up with my mom wanting us to [wear] Christmas pajamas, and they were really silly, but that's just kind of how my mom liked to do Christmas morning, with all of us wearing matching [pajamas], so we’ve done that for forever," she explained. "When Cash joined our Christmas festivities, he of course had to join in on the fun. He was a little horrified!"

In fact, when Alba married Warren back in 2008, it was a true melding of family traditions, which has allowed them to create unique holiday memories for their own children for the past decade.

"His family tradition is to have kind of a nice, sit-down soul food dinner, and we did not do that growing up," Alba said with a laugh. "It was styrofoam plates, plastic forks, food thrown together from the can and "find a place on a carpet while the game is on." But, his family does not play when it comes to food. So, we sort of combined our families’ traditions!"

See photos of Cash Warren and Jessica Alba together:

"We’ve done up to 80 people for a sit-down dinner at our home, we host it," she went on. "It’s like a wedding, with rented tables and chairs and the whole shebang. My dad always dresses up as Santa, and we do gift exchange with just the kids and a white elephant ornament game and then we also sing carols. We took a bit of what we did as a family and combined it with what Cash did."

They're traditions that her daughters have loved to partake in, and that Alba knows her son, Hayes, will particularly appreciate as he gets older.

"He’s so sweet. I did a Facebook Live with him and a little friend, and we had fake presents and he went crazy with the presents," she said. "He was so into it. It’s like, 'Oh my god, you’re going to love Christmas morning.' He’ll love it so much, because he just loves ripping things apart."

As for the photo shoot for Hayes' first family holiday card, Alba didn't mince words when we asked how the sitting went with a 10-month old.

"It all revolves around him being happy and smiling, which involves everyone trying to make him happy. And then, of course, the one where he is really happy, Honor or Haven are looking up or down and not paying attention," she laughed. "We got it, but it took quite a few tries."

Jessica Alba'a Style Transformation
Jessica attends the "Apt Pupil" Premiere on October 6, 1998 in a perfect-for-fall outfit, with dark colors from head to toe.
At the "Never Been Kissed" Premiere, we're not surprised to see Jessica in this classic late-'90s, early 2000s style.
Jessica wore this floral maxi dress to the 27th Annual People's Choice Awards.
Alba embraced winter whites for the Golden Globe Awards.
Casual and sheer was all Jessica needed for a great VH1 Big in 2002 Awards outfit.
Jessica wore this fitted halter to the Elton John AIDS Foundation's 11th Annual Oscar party.
Alba wore a white top and jeans to the 2003 ESPY Awards.
We love the pop of red on this strapless dress for the 4th Annual Latin GRAMMY Awards.
Jessica Alba in a Louis Verdad Dress during SKYY Vodka and Maxim Magazine Party.
Jessica chose a lime green ruched dress for the VH1 Divas Benefitting The Save The Music Foundation.
Jessica went for a summery vibe during The 2004 Teen Choice Awards.
Red and strapless is the perfect dress for the "Sin City" Premiere.
Jessica looked stunning during the 2005 Cannes Film Festival Premiere of "Sin City."
Jessica chose a dress embellished with pretty butterflies for the 2005 MTV Movie Awards.
Jessica Alba attended the "Into the Blue" Premiere in a tea-length strapless dress.
Jessica wore this champagne lace, open-backed dress to the Academy Awards, and was a show-stopper.
Jessica looked lovely in this silver strapless dress during the "Costume Institute Gala" at the Met.
One of our favorite combos: black and gold.
Alba wore this classic look to the 7th Annual El Sueno De Esperanza Gala.
Jessica was glowing in this feathered strapless gown at the 80th Annual Academy Awards.
Jessica debuted new bangs with this intricately-adorned black gown at the Keep A Child Alive Organization's 5th annual Black Ball.
Jessica attended the Film Independent's 2009 Independent Spirit Awards and looked positively lovely in this lavender dress with her bright floral clutch.
Feminine ruffles are always in style, and Jessica went for a classic look of black and white.
Continuing the black and white look, Jessica wore this dress with an interesting neckline to a book launch party.
We love the dress, but we are totally distracted by that bling!
Between Jessica's amazing hair cut, dress and platform heels, her outfit for the "Valentine's Day" Los Angeles premiere was a huge win.
If anyone can pull off this tight leather dress, it's Ms. Alba.  She looked amazing!
Jessica attended the 2010 White House Correspondents Association Dinner in a gorgeous peplum gown.
Jessica chose a gold and black sequined dress for a screening of "Machete."
We can't get enough of Jessica's dress for the BAFTAs, and the perfect pop of red on her lips!
A pregnant Alba looked stunning for the CFDA Fashion Awards.
In a fun twist on a classic dress, Jessica sparkled at the Glamour Women of the Year Awards.
Jessica looked lovely at the Golden Globes in this lavender embellished gown.
Metallic was (and still is!) very in, and Jessica rocked this dress for the Costume Institute Gala.
We love a girl that makes bold fashion choices, and this dress is certainly one of those.
One of the most talked about -- and loved -- dresses from this year's Golden Globes, Alba hit it out of the park with this coral gown.
Sleek from head to toe, Jessica looked gorgeous in this ensemble for the opening of Tommy Hilfiger's L.A. Flagship store.
One of our "hits" of the night, Jessica looked gorgeous as always in this flirty pastel dress at this year's Kids Choice Awards.
Could she be any more flawless?
Alba attended the Baby2Baby Gala in what may be our favorite dress of 2013 - of all the dresses worn by anyone.
Always chic, Jessica killed it at the Christian Dior 2014 Autumn/Winter show at Paris Fashion Week.
We loved Jessica's crop top and high waisted skirt at this year's MTV Movie Awards.
Up Next

More from Aol.com:
Lili Reinhart is happy we have less 'old cranky white men' in office
Sarah Michelle Gellar's 'reminder not to overeat' on Thanksgiving post met with mixed reactions from fans
Jada Pinkett Smith breaks down in tears over her parents' abusive relationship