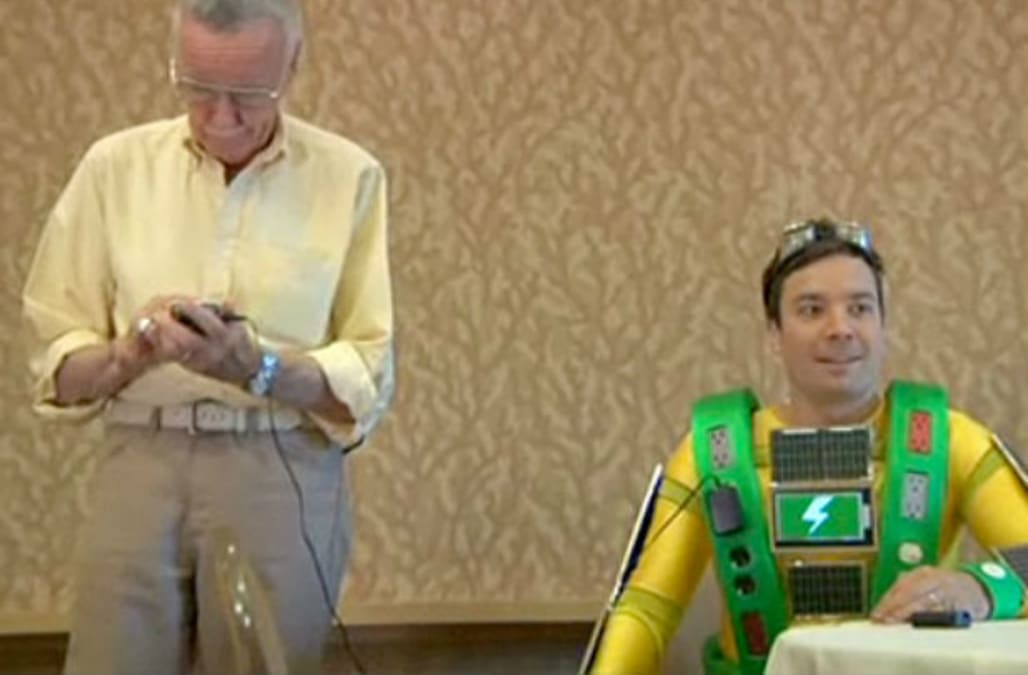 Stan Lee co-created the Marvel universe, so it’s safe to say the comics legend, who died Monday at age 95, knew a thing or two about making a good superhero costume. That skill set came in very handy in 2009 gag on NBC’s “Late Night,” when then-host Jimmy Fallon tried, and failed, to impress lee with his own superhero idea.

In the 2009 clip, shared by a Fallon fan and retweeted by Fallon’s official Twitter account, Fallon traveled to San Diego Comic-Con 2009 to pitch several comics luminaries on his environmentalism-themed superhero “Recharger.” The concept: a hodge podge of discarded radio shack parts powered by solar energy, Recharger has the ability to recharge anyone’s phone in an environmentally friendly way.

Unfortunately, the costume also looks friggin’ ridiculous, not only because it is skin-tight and an ugly lime green, but because of where the costume’s helpful power outlet is installed — the wearer’s butt.

RIP Stan Lee
Here’s a sketch he did with Jimmy Fallon on #LNJF 💛 pic.twitter.com/oEa7b76c6I

Fallon showed off his idea to several nerd bigwigs, including Joss Whedon, Jon Favreau, and Geoff Johns. But the funniest moment came when he brought Recharger concept art to Stan Lee. After proving incapable of sincerely praising the outfit, Fallon talks Lee into pretending anyway, leading to an all timer of a back-handed compliment: “Did this come out of your own mind? Your own twisted, gnarled, mixed-up mind?”

Luckily for Fallon, by the end of the sketch Lee came around. Because as anyone whose ever attended Comic-Con knows, power outlets are few and far between and worth whatever it takes to get access, even if it’s through Jimmy Fallon’s butt.

More from The Wrap:
Mike Myers’ Dr Evil reveals he’s running for Congress on a 5-point ‘Eviltarian’ platform (Video)
Los Angelenos lie through their teeth about having already voted in the midterm elections (video)
‘Saturday Night Live’ slammed for Charlie Sheen joke: ‘Threw people with HIV under the bus’ (Video)