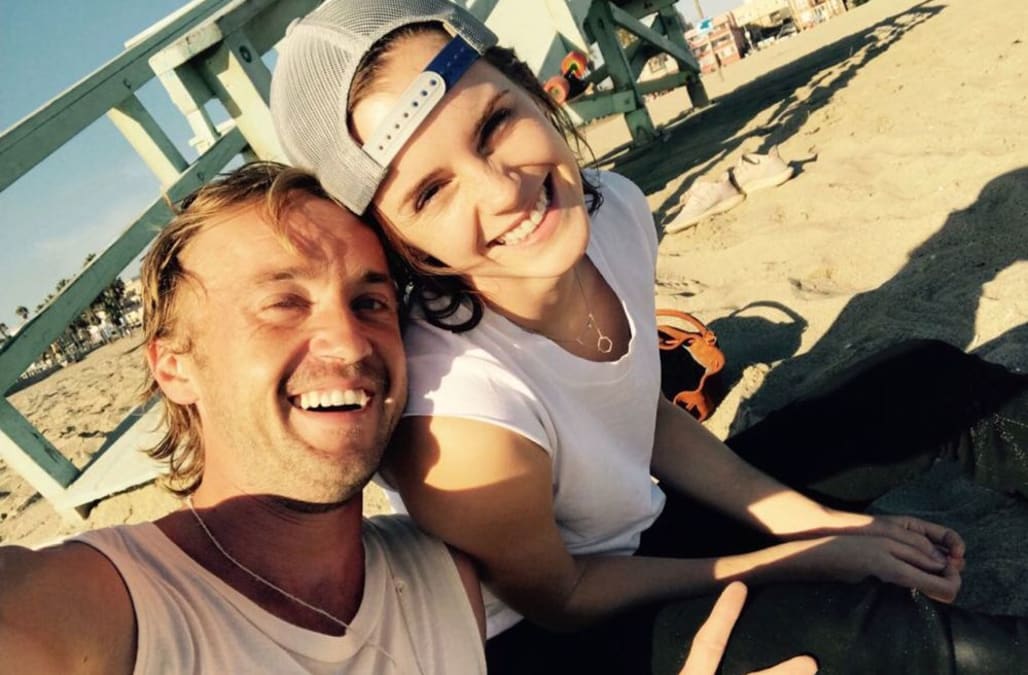 Emma Watson and Tom Felton -- who played Hermione Granger and Draco Malfoy, respectively, in the beloved franchise -- just hung out at the beach together. On Thursday, 28-year-old Watson took to Instagram to share an adorable pic and a hilarious video from the duo's get together.

In the selfie, Watson and Felton, 31, are cuddled up with giant smiles on their faces. Both of the actors are sporting white T-shirts and silver necklaces in the pic, while Watson added a backwards baseball cap and dark pants to her look.

The sepia-toned video of the duo skateboarding together is as cute as you'd imagine. "Easy with the wobbling! Keep your feet still," Felton jokingly chastises his former co-star.

"They are!" Watson exclaims as she holds on to his shoulders.

"You're not! You're dancing around on the board like a clown," he quips. "Hang on tight."

"Hanging on," she assures.

This isn't the first time Watson and Felton have hung out this year. The duo caught up with Matthew Lewis, their fellow Hogwarts classmate, back in April. "School mates #hogwartsalumni," Felton captioned the black-and-white shot.

Last month, Felton hung out with Harry Potter himself, Daniel Radcliffe. The onscreen villain went to see 29-year-old Radcliffe's new Broadway play, The Lifespan of a Fact. “Go see it. He’s fantastic as per @lifespanofafact,” Felton wrote alongside the sweet photo.

Go see it. He’s fantastic as per @lifespanofafact

Back in March of 2017, Watson told ET that the whole Harry Potter cast has managed to keep in touch over the years. "It's a case of trying to, like, get people into the right places, but yeah, everyone has been very supportive and I'm very supported by my old co-stars," she said at the time.