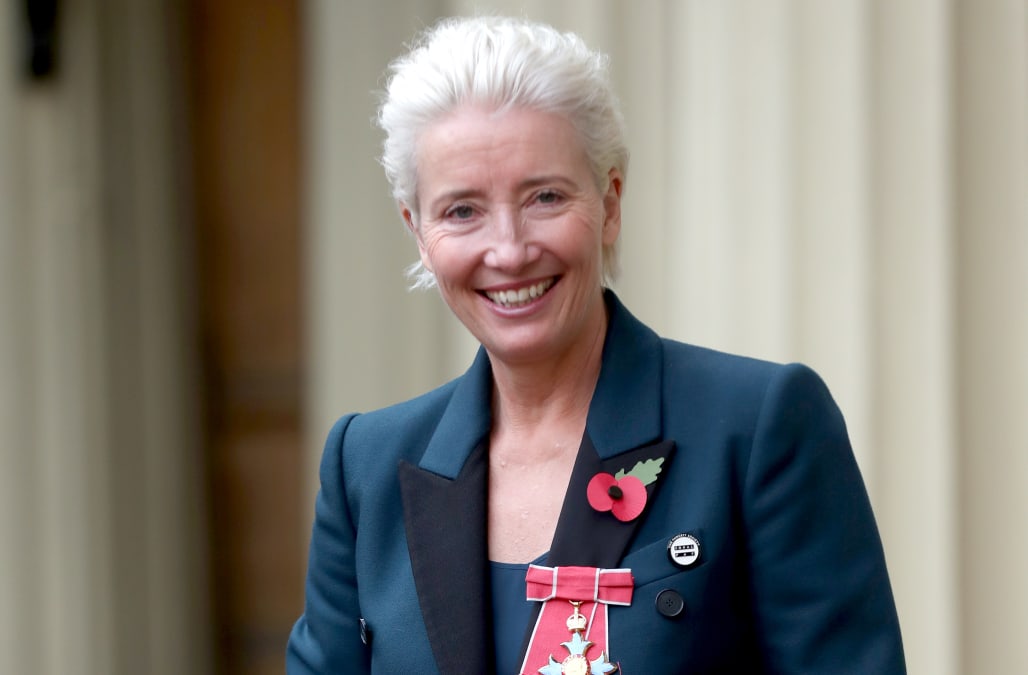 Even a ceremony as grand as receiving a damehood couldn't stifle Emma Thompson's quick wit.

The Oscar, Golden Globe and Emmy-winning actress and writer received the title of Dame on Wednesday from Prince William, and managed to fluster the Duke of Cambridge in the process.

"I love Prince William, I've known him since he was little, and we just sniggered at each other," Thompson told The Daily Mail. "I said, 'I can't kiss you, can I?' And he said, 'No, don't!'"

The 59-year-old added. "If you're first up, you have to be more formal on such an occasion, but he's looking wonderful and doing so well. He said, 'This day isn't about me, it's about you.'"

Thompson has been a longtime friend of the royals, and was honored to be part of the moment with the man she saw grow from a young child.

"It’s really lovely, because I’ve always loved the boys and I’ve always been a long-term correspondent with their dad. It’s a very lovely feeling," she said.

The newly minted Dame was recognized in the Queen's Birthday Honors list in June, and was joined by her husband, Greg Wise, and their children, Gaia, 18, and Tindyebwa, 19, for the ceremony.

Now that she's officially a Dame, don't think that will stop Thompson from speaking her mind.

"I’m very outspoken, politically. I’m a card-carrying feminist, human rights advocate, so good for them, because the establishment need more people who can speak up for those things," she said of the honor.

The Love Actually star has also been outspoken about equality in Hollywood, speaking out for her fellow actresses. Hear what she has to say in the video below.

Emma Thompson's Style Transformation
Emma Thompson glittered in gold, pictured here with Anthony Hopkins at the opening of "Les Miserables" in LA.
Thompson was shimmering in another metallic dress at the 50th Annual Golden Globe Awards.
It's a sequined emerald gown for Emma Thompson at the 65th Annual Academy Awards
This is so '90s, and we totally dig it. Plus, the silky fabric looks comfy!
Emma Thompson at the premiere of "Junior," showing a little bit of skin!
Well, we can't say it's our favorite look. But hey, this way she can go home and hop in bed after seeing the premiere of "Sense & Sensibility," no need to change!
Emma looked simply stunning in this look, made complete by her glowing skin and shiny blonde locks.
An edgier look is fitting when you come to New York City, but we wish this one had been toned down a bit -- it's never our fave to do bold makeup AND a bold dress!
Emma Thompson attending the premiere of "Primary Colours," wearing one of those primary colors, herself.
These ladies are looking glamorous (even if with a bit more fabric than we'd like to carry around) at the White Tie & Tiara Ball.
Emma looked gorgeous in this trick-the-eye metallic and green gown.
At the premiere of one our our favorite movies (of.all.time.) "Love Actually," Emma wore plum in velvet, fur and satin from head to toe!

As you'll see over the next several photos, Emma is clearly a fan of large fur shawls!
Emma looks boho-fun and youthful for the "Nanny McPhee" premiere in London.
This fur just overtakes Emma's outfit, we can't even see the dress underneath!
Emma attended the Glamour Women of the Year Awards in this monochromatic satin ensemble.
Emma is stunning in silver at the BFI London Film Festival.
There's that fur again! This time we can see Emma's dress a little better, and she looks great!
Emma Thompson went all out in a '20s flapper dress and accessories that we LOVE during the Lavender Trust Party in London.
We might not choose to wear sneaks to a Chanel runway show, but at least Emma is comfy! Can't say the same for the women walking around those shows in 5 inch heels.
Thompson is loving this bright fun pattern of this dress, which she wore to the world premiere of "Last Chance Harvey."
Emma adds a pop of color to this classic ensemble with a bright blue clutch.
From her hair to the top and the long coat, this look is all about volume volume volume!
We love this outfit on Thompson -- her hair is divine, the dress and coat are totally chic, and we're obsessed with those shoes!
Emma attends the premiere of 'An Education' in a chic black and white ensemble.
Emma looked cozy in Madrid, wearing a perfect outfit for an on-the-go gal.
We're loving the pop of red in Emma's bag, necklace and on her lips at the premiere of "Nanny McPhee and the Big Bang."
This asymmetrical neckline adds a lot of interest to a classic black dress.
Grace.  That's what we have here, ladies and gents, a class act.  Thompson looked stunning at the Harper's Bazaar Women of the Year Awards.
Black and white is always a winning combo in our book, and when you put it together like this, we love!
LATE NIGHT WITH JIMMY FALLON -- Episode 943 -- Pictured: (l-r) Emma Thompson with host Jimmy Fallon during an interview on Thursday, December 12, 2013 -- (Photo by: Lloyd Bishop/NBC/NBCU Photo Bank via Getty Images)
LONDON, ENGLAND - OCTOBER 14: Emma Thompson attending as Boodles celebrates the opening of their new Bond Street flagship store on October 14, 2015 in London, England. (Photo by Mark Robert Milan/GC Images)
LATE NIGHT WITH SETH MEYERS -- Episode 729 -- Pictured: (l-r) Actress Emma Thompson during an interview with host Seth Meyers on September 10, 2018 -- (Photo by: Lloyd Bishop/NBC/NBCU Photo Bank via Getty Images)
LONDON, ENGLAND - OCTOBER 06: Emma Thompson attends 'The Meyerowitz Stories' UK Premiere during the 61st BFI London Film Festival at Embankment Gardens Cinema on October 6, 2017 in London, England. (Photo by Fred Duval/FilmMagic)
LONDON, ENGLAND - NOVEMBER 7: Actress Emma Thompson leaves Buckingham Palace after receiving her damehood at an Investiture ceremony on November 7, 2018 in London, England. Ms Thompson, 59, received the accolade in recognition of her services to drama. (Photo by Steve Parsons - WPA Pool/Getty Images)
LONDON, ENGLAND - OCTOBER 17: Emma Thompson attends the opening night of 'Company' at Gielgud Theatre on October 17, 2018 in London, England. (Photo by Mark Milan/Getty Images)
Up Next