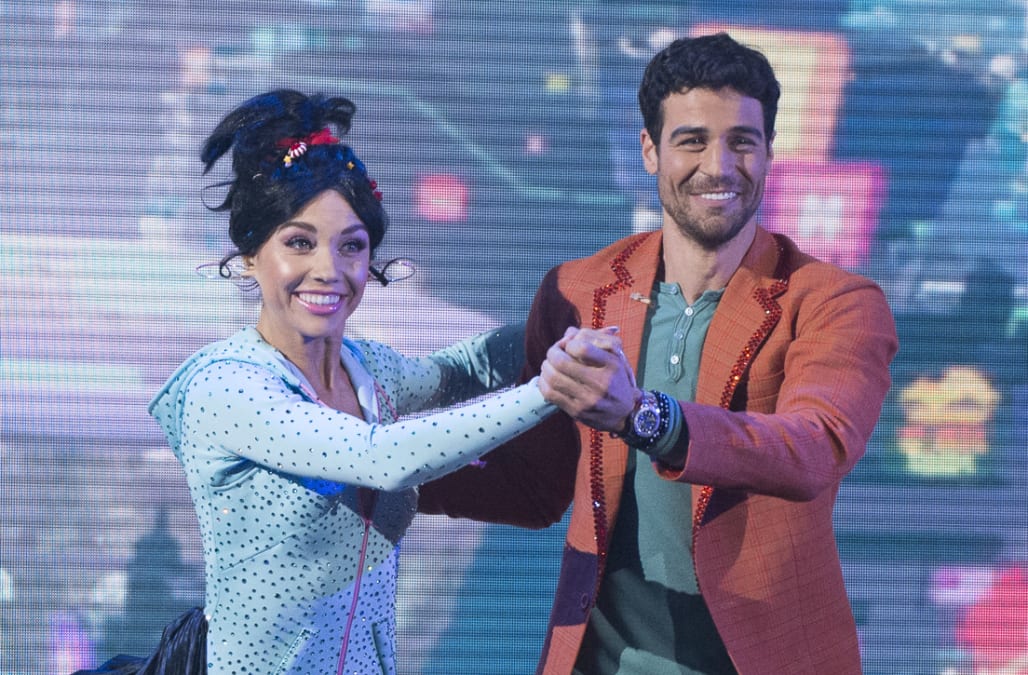 Every season of Dancing With the Stars features a diverse cast of celebrities who come into the game from a wide range of backgrounds and with varying levels of dance experience.

Occasionally -- usually around the middle of the season -- fans are dealt a real shock when one of the show's best dancers gets eliminated because they just didn't get the votes needed to stay in the game.

However, that pendulum can swing both ways. Since eliminations are heavily determined by viewer votes, sometimes a less-than-amazing star manages to stay off the chopping block for quite some time based solely on their fan base.

ET is looking back at a few celebs who made it much farther on the show than anyone expected, based on the judges' scores.

Despite getting the lowest scores every single week he danced -- with his highest score being a 16 in Week 2 -- the rapper's fan base and personality gave him enough momentum to beat out three other contestants. However, he ended up getting the boot in Week 4 after he and pro partner Ashly DelGrosso performed a paso doble set to The Animals' "Don't Let Me Be Misunderstood" that earned them a total score of 8 -- getting a '4' from Carrie Ann Inaba and two '2's from Bruno Tonioli and Len Goodman. To this day, it's still the lowest score the show has ever seen.

When Carolla signed on with DWTS, it was hard for anyone to believe that he was going to take it very seriously. While he didn't completely bomb (and even survived the show's first-ever double elimination, which came in Week 2, for some reason) he sort of sealed his fate during Week 4 when he hit the dance floor with pro partner Julianne Hough, while riding a unicycle for their Zorro-themed paso doble. He ended up going home the same night.

The Oscar-winner was 82 years old when she joined the cast of Dancing With the Stars, and she surprised everyone by making it all the way to Week 6 alongside her partner, Corky Ballas (Mark Ballas' dad). They routinely found themselves at the bottom of the leaderboard, but love for Leachman's legacy and her never-quit attitude won her a lot of love. However, in her final night of the competition, she performed a hip-hop group number set to "It Takes Two" Rob Base & DJ E-Z Rock and, well, it seemed like a bizarrely fitting final dance for her oddly successful run on the show.

While the Apple co-founder was certainly an enthusiastic guy, he wasn't exactly born to dance. Despite the best efforts of his pro-partner, Karina Smirnoff, the tech mogul just couldn't win over the judges -- even when, during one performance, he did The Worm (well, tried to.) However, his charm and, possibly his connection to Apple, got him and Karina all the way to Week 4, where he and Playboy playmate Holly Madison were sent home in a double elimination. During his final night, Steve and Karina performed an Argentine tango that earned them a dismal 12 out of 30 -- which was still two points higher than their abysmal samba the week before!

The reality star managed to stay in the competition all the way until Week 5, despite never getting a score higher than a '6.' It's impossible to say who exactly was voting to keep her the whole time, but her and partner Tony Dovolani's foxtrot during Movie Week, which resulted in a score of 15 out of 30, sealed the deal and she was eliminated that night.

Comedians rarely do well on DWTS. Just look at Jeffrey Ross, Carolla, or, most recently, Nicki Glaser, who was kicked out in the first week of season 27. But somehow Dick managed to make it all the way to Week 7. Partnered with Sharna Burgess in her first outing as a DWTS pro, the controversial comic -- who seems to be frequently entangled with endless legal issues, addiction battles and scandals -- stayed around week-after-week, despite less-than-impressive scores. However, his final dance came during Latin Night when he and Burgess delivered a rumba that earned them a 17 out of 30 (again, in Week 7!), which was a full five points lower than the next lowest score.

While it's hard to understand how many of the stars on this list made it as far as they did, it's not at all difficult to see Engvall's appeal, considering the success of his Blue Collar Comedy Tour, which helped connect with audiences in middle-America. However, even with millions of fans voting for him independent of his skill level, the comedian and his pro partner, Emma Slater, still managed to defy all the odds by making it all the way to Night 1 of The Finals -- ultimately ending up in fourth place, overall!

The appeal of old Cheech and Chong movies are still strong after all these years. That said, it's easy to see that Tommy Chong isn't a dancer, by any stretch of the imagination. However, the comic actor and his partner, Peta Murgatroyd, soldiered on week-after-week until the Semi-Finals (in Week 10), when Chong and Murgatroyd finished the season in 5th place. While his routines weren't always terrible, there were at least a few that featured Chong basically sitting for most of the dance while Murgatroyd and a few other troupe members basically just danced around him. This is a solid example of how, sometimes, nostalgia can score you a lot of support.

Soules had just finished his season of The Bachelor about a week before his season of DWTS kicked off, and despite not being very limber or "good at dancing," he had abs and a down-home country charm. Add that to an admittedly powerful chemistry with his partner, Witney Carson, and it makes a certain amount of sense that he'd managed to stay in the competition longer than expected. Still, making it all the way to Week 8 shows the true power of the Bachelor Nation fandom.

DWTS pro Anna Trebunskaya had been with the show since season two, back when she came in 2nd place with Jerry Rice. She had been partnered with stars like Steve Guttenberg and Chuck Liddell in the past, culminating in 11 seasons of performing! Then, she got partnered with Busey. Somehow, under her guidance, the famously mercurial actor managed to make it all the way to Week 4 (a full three or even four weeks longer than anyone expected when the cast was originally announced). Trebunskaya has not appeared as a pro on the show since.

During the same season that Gary Busey blew people's minds with his unique brand of disconcerting screaming, Deen tried to make a run for the Mirrorball trophy and shockingly made it to Week 6, even suffering a revealing wardrobe malfunction along the way. On average, she scored only marginally better than Busey, and her partner, 10-season DWTS pro Louis van Amstel, also never returned to the show after this season.

Perhaps the single greatest example of a star going way farther than anyone could have ever predicted, Ross managed to not only make it to the finals but, he ended up beating out Normani Kordei for 2nd place! Exasperated pro Lindsay Arnold deserves quite a bit of the credit for his mindblowing success, but not as much credit as the simple fact that Ross and his Chicago Cubs won the World Series for the first time in almost 100 years, less than six months prior. A miracle like that will bring in the votes, even if the voters aren't actually watching the show.

The TV personality already had an immense fan base from his HGTV series Property Brothers, and he was not left hanging, even as he and partner Emma Slater delivered lackluster performances (that somehow earned unreasonably positive scores from the judges). During one of the weeks, Drew's brother, Jonathan, joined the pair for a dance and, despite not having learned to dance for the past few months, Jonathan did just as well as, if not better than, his brother. Still, Drew's winning smile and charismatic personality helped him make it all the way to the finals where he came in 4th overall.

During the first week of the competition, Joe said his only goal was to make it past the first week. Despite getting the lowest scores (by far) during Week 1, he wasn't even in jeopardy. In fact, despite Joe and his partner, Jenna Johnson, being in last place on the leaderboard nearly every week, they've never even been in the bottom two. This is even after their trio dance, where Joe and Jenna performed a disastrous salsa set to "I'm Too Sexy" by Right Said Fred that got dismal reviews. There's something about his smile, his unassuming charm and his legion of Bachelor fans that have managed to keep him in this game, with the strong possibility of going all the way to the finals!

Celebrities you forgot competed on 'Dancing With the Stars'

Inside the 'Dancing With the Stars' Team Rehearsals: See Who's Competing Against Each Other! (Exclusive)

The Most Naked Moments From 'Dancing With the Stars'