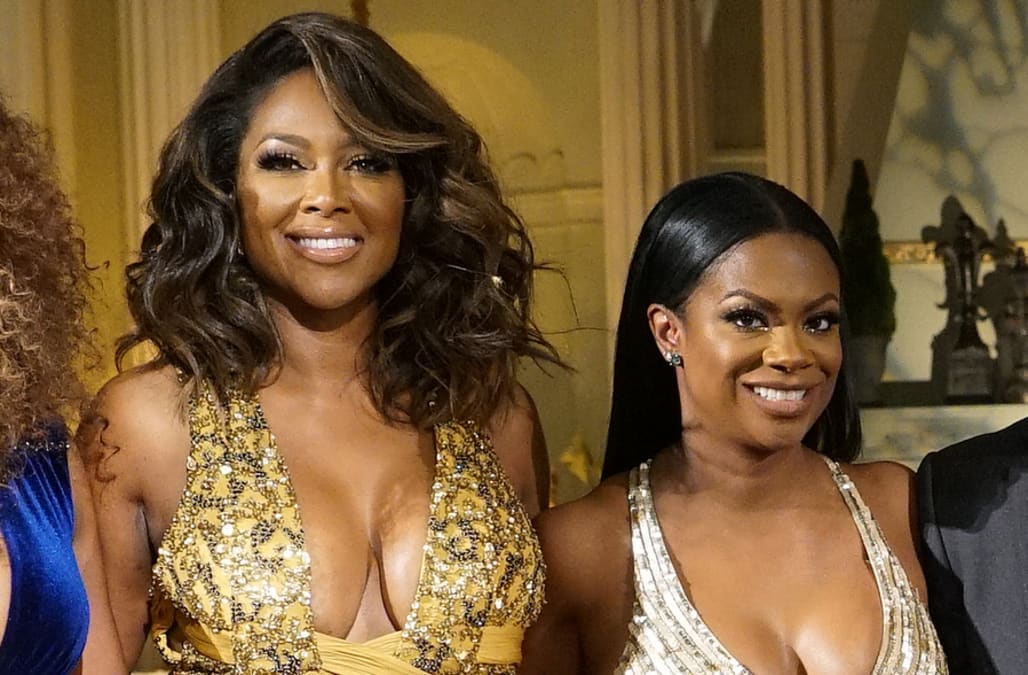 Kandi Burruss knows The Real Housewives of Atlanta’s season 11 trailer left a little something to be desired, but says, that's nothing to worry about.

“I guess they're trying to save a lot for the fans,” she tells ET. “'Cause I know it was a lot more juicy things that happened that I felt like, OK. Well, maybe they didn't want to give it all to you in a trailer.”

When the trailer dropped, Twitter lit up with viewers wondering what the hell even happens this season, as the first look showed a lot of moments, but didn’t reveal any major plot points.

“I mean, when I tell you a lot of things happened even after they released the trailer, 'cause you know we were still taping,” Kandi continues. “It's been a lot to happen in just the last two weeks, OK?”

Those two weeks included Eva Marcille’s wedding, Porsha Williams’ gender reveal party, a sex dungeon-themed party thrown by Kandi -- and those are just the events the public knows about.

“My last day of taping for this season was Saturday night, and people were crying,” Kandi let slip. “We bring the drama naturally. We don't have to try.”

“This season is gonna be totally different, especially totally different from the last couple of seasons,” she shares. “The drama is different. It's not the 'mean girl drama.' You know, it's a lot of personal issues that are going on this season that people are dealing with, life-changing things.”

Those “life-changing things” include at least one wedding, one baby, a cancer battle and lots of speculation surrounding Porsha’s new romance with Dennis McKinley -- drama Kandi admits to stirring up herself.

“I would say it's a roller coaster between she and I,” Kandi says. “I feel like when the season started out, she and I... I didn't know what to expect. You know, I didn't know if we were gonna be cool, if we weren't.”

Kandi says things started off cool, but then took a bit of a turn.

“You know, I'm the person in Atlanta that knows everybody, everybody knows me,” she notes. “So, I. knew things about her significant other, and when the season first started, in my mind, I was trying to figure out, uh... do I have these conversations with her? With the group? 'Cause, you know, we all discuss everybody's new men on the show, new man, whatever. And I just, I just went back-and-forth on that with myself, because OK, we're already in a shaky place, but at the same time, this is what we do on the show -- we talk about the new guys.”

“Basically, you know, there was some tea dropping,” she teases. “I can't [reveal anything], but to say, you know, for me, it was more of a thing, if it's a new relationship, you should know what you're getting into.”

Now, Porsha is not the only RHOA star expecting her first child. Kenya Moore, who is not a cast member this year, is set to give birth any day now, and Kandi promises Housewives fans will get an onscreen update from the reality star.

“Well, she does pop up,” Kandi divulges. “She does pop up once, to my begging, of course… I was probably one of the most disappointed out of everybody that she wasn't going to be with us this year, but I feel like it was great for her to be able to enjoy her pregnancy and not go back and forth with people and all of that stuff, so it's great for her to have a healthy pregnancy.”

I got @thekenyamoore out to celebrate our girl @cynthiabailey10’s new Event Space & Wine shop. Both of these ladies have a lot to celebrate!

“But I just was like, ‘Kenya, people have to see you at least once,’” she adds. “So, I kinda twisted her arm. She is gonna be there.”

While Kenya will only make the one appearance on season 11, Kandi says there’s always hope for a full-time return in season 12.

“I feel like the Bravo family wouldn't mind her being back,” Kandi surmises. “Everything happens for a reason. This was a time she needed to focus on her baby and being healthy. For me, that's why things happened the way they happened. But do I feel like she should be back, or that she would be back? Yes!”

Kandi has a baby of her own on the way, too, but it’s the professional kind. The GRAMMY winner transforms into a drug addict for the new drama Never Heard, out now in select theaters.

“I had been talking to my agent about, you know, I want to do more acting, but I want to do roles where people don't see Kandi,” she says. “They don't see just who I am, they really see the character. So, when he brought this role to me -- this role, I am the mother of two sons, I'm a single mom in this movie, but a drug-addicted mom. Any my sons, you know, they don't have their father in their lives, and that's part of the title, ‘Never Heard My Father Speak,’ and it's just, how that affects the family and how to bring that family back together and all of that.

”It's definitely a story that people really need to see, but as far as me playing this part, I so thoroughly enjoyed it.”

And you can thoroughly enjoy the new season of The Real Housewives of Atlanta when it premieres Sunday, Nov. 4, at 8 p.m. ET on Bravo.