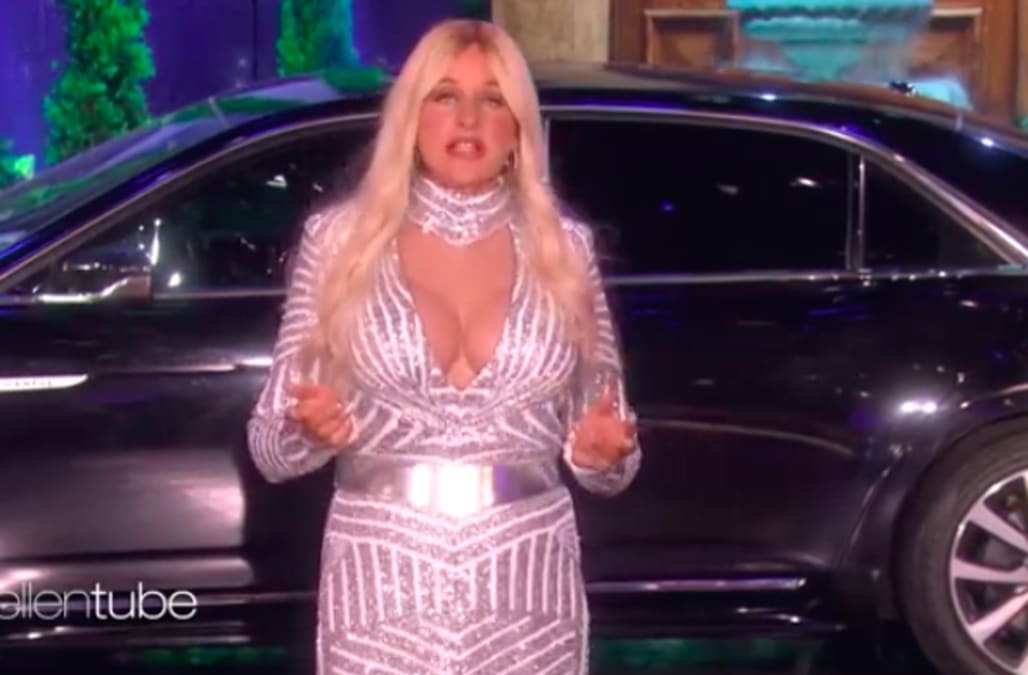 Ellen DeGeneres is here for the right reasons!

On Wednesday’s episode of The Ellen DeGeneres Show, the host gets in the Halloween season with an incredible costume. Dressed as a Bachelor contestant named Kelllly D., a dental assistant from New Jersey, DeGeneres looks ready to accept a rose!

The host dons a sparkly silver gown that shows off some serious cleavage as well as a blonde wig, hoop earrings and full stage makeup for the costume.

DeGeneres’ guest on the episode is none other than Rebel Wilson, who comes to the show dressed as the volleyball named Wilson from the film Castaway. The host’s costume seems to inspire Wilson, who reveals that she’d be willing to appear on The Bachelor -- for a price.

“I reckon, like, I’d smash it on there. Because I have a lot to offer a man, ” Wilson, 38, says of the long-running ABC series. “You know, I think it’d be really cool to have an internationally famous actress who’s good at nunchucks and stuff. It’d make for a good season, I think.”

DeGeneres is totally on board for Wilson’s possible appearance on the reality show, but Wilson wouldn’t agree to do it just to find love.

"But I’d definitely go on it for that price,” see adds with a wink. “I’m around. Still single, believe it or not. I know my outfit is quite sexy.”

Though the pair’s conversation continues on, Wilson eventually brings up DeGeneres’ costume again, asking, “Ellen, do you have much underboob sweat?”

“Not yet, but I’m sure that will happen,” DeGeneres replies. “There’s a lot going on, I’ll tell you that right now.”

“You know, I feel like myself,” the host quips with a hair flip.

For Wilson, who hails from Australia, the idea of Halloween is a relatively new one. In fact, when her mom was in town for the holiday last year, they decided to drive around and look at some costumes.

“We worked out where is the good trick-or-treating neighborhood, drove around, and then when we got to bunches of kids, my mom would wind down the window and take pictures of them,” Wilson reveals with a laugh. “She’s a kindergarten teacher, so she obviously loves kids. She wanted to see how Americans do it so she could implement that back home.”

“We call her the momarazzi because she takes too many photos, and I really thought we were going to get busted,” Wilson continues. “Like someone was going to report us for just like driving really slowly up to kids and taking their photo, but we’re just two Australian chicks wanting to learn about trick-or-treating.”

Over the last year, Wilson’s been on a “year of fun,” where she traveled -- to places like French Polynesia, New Zealand and Iceland -- instead of working. She even met Julia Roberts at a Taylor Swift concert!

Had the best time @taylorswift ‘s REPUTATION concert tonight! And so cool to see @troyesivan and @selenagomez onstage too! What an epic night xx shoutout to the lovely Goff family, Kobe, Miles, Julia, Amber, Lena, Wiz and everyone who was there having an awesome time! And thanks @carlyjsteel for organizing the tickets and standing on the director’s chairs with me!

The year is almost up, though, and fans are full of speculation about one of Wilson’s possible upcoming projects -- Pitch Perfect 4. Rumors of a fourth flick began when she posted a pic of her and her co-stars holding up four fingers.

“I can’t say anything officially, Ellen, but we all just love each other. All of us girls,” Wilson says before teasing, “Definitely I’ll be filming another musical film in the next 12 months. I can say that. You’ll see me singing a bit more.”

“But yeah, us Pitch Perfect girls, we love each other and we always want to work together,” she adds with a smile.

Her next project, though, is a new film called Isn’t It Romantic, for which she debuted the trailer on Ellen.

Wilson, who also produced the movie, stars as a girl who hates rom-coms before suddenly finding herself in the world of one. The film also stars Adam Devine and Liam Hemsworth as her two love interests.

“I have two love interests in the film because why not? If you’re the producer you get to choose that,” she quips, before adding that she “totally got to make out with” Hemsworth.