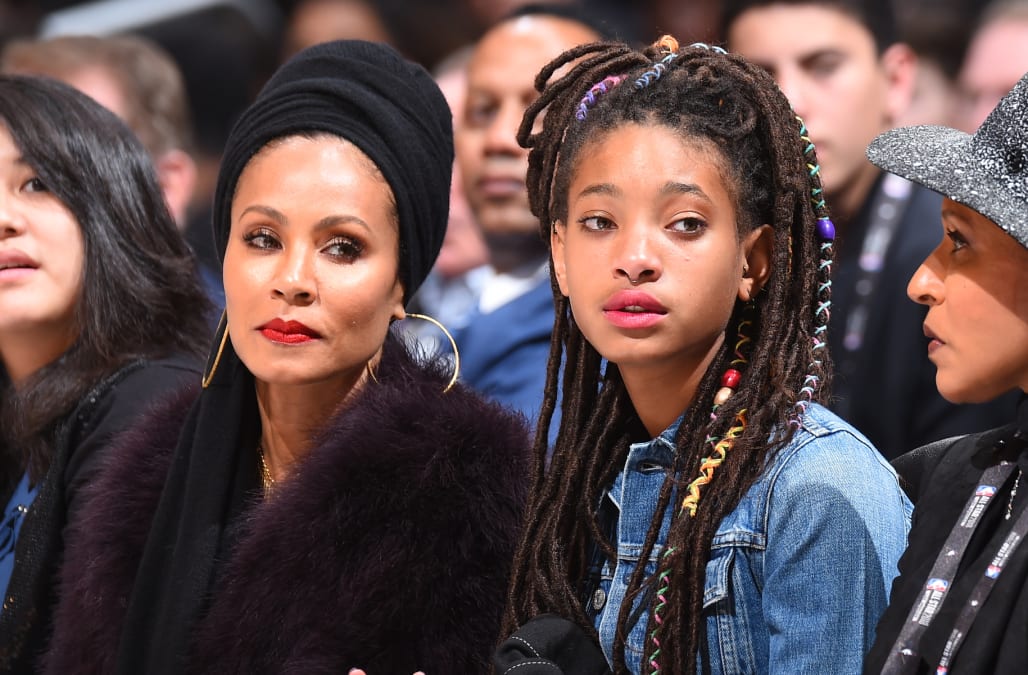 Jada Pinkett Smith is opening up about how she felt after her daughter, Willow, revealed that she used to cut herself.

The 47-year-old actress appeared on The MOMS podcast on Tuesday, where she recalled her daughter's confession during an episode of their Facebook Watch show, Red Table Talk, back in May.

“I wanted to make sure she was OK,” Jada said of her mindset after learning about Willow's self-harm. “We went through what happened, and in the moment I realized, as a mother you also have to give your children space to deal with their own shadow.”

While it came as a shock to Jada -- she commented "I had no idea" during the Red Table Talk episode -- she decided to focus more on 18-year-old Willow's success, rather than regrets that she didn't know about it earlier.

This week around the Red Table, Jada Pinkett Smith reveals the impact of the tragic death of her longtime best friend, Tupac Shakur. While Willow Smith shares a painful secret for the first time. Follow Red Table Talk for episodes and updates, only on Facebook Watch.

“I focused more on how she got herself out versus what got her there. I was most proud about that she could share it in the way she did, which let me know she had come through in a major way that she could put it on the table like that,” Jada said. “I wanted to focus on what [it was] that got her through. I really talked to her about her powering side of her journey and give her all the praise in the world for that part, instead of focusing on ‘Why didn’t you tell me?'”

On the Facebook Watch show, Willow revealed that she began self-harming after the success of her 2010 song, "Whip My Hair."

“I would have to say I honestly feel like I lost my sanity at one point. It was after that whole ‘Whip My Hair’ thing and I had just stopped doing singing lessons and I was kind of just in this gray area of, ‘Who am I? Do I have a purpose? Is there anything I can do besides this?’” Willow said at the time. “After the tour and the promotion and all of that ... they wanted me to finish my album. And I was like, 'I’m not gonna do that.'"

Willow continued, "After all of that kind of settled down, and it was, like, a lull, I was listening to a lot of dark music and it was just so crazy, and I was just plunged into this black hole and I was, like, cutting myself and doing crazy things.”

The daughter of Jada and her husband, Will Smith, went on to say that she lost her "sanity for a moment there," and called the cutting "a short, weird point in my life."

"I honestly felt like I was experiencing so much emotional pain but my physical circumstances weren't reflecting that," Willow said. "One night I was like, this is actually psychotic and after that I just stopped. It's been, like, five years."

ET caught up with Jada and her mom, Adrienne Banfield-Jones, earlier this month, and Jada opened up about some tough points in her marriage to Will, saying she "needed more freedom."

While it may be hard for a child to hear that their parents haven't always been happy, Jada noted that it's important that her kids -- Willow,  Jaden, 20, and Trey, Will's 25-year-old son from a previous marriage -- learn from the good and the bad of her relationship.

"Willow has been a part of that transformation from Day 1. So she wasn't shocked. And I think it's important, in all honesty, for our... kids to have the opportunity to see their parents and to listen to their parents talk about different stages of light that you go through," Jada said. "Because I think we don't talk enough so that when things do happen, now you feel like you're unique, now you feel like it's just you."

Willow Smith Reveals to Mom Jada That She Used to Cut Her Wrists: 'I Lost My Sanity at One Point'

Will Smith Recalls the Time He Broke Up With Jada Pinkett Smith: 'I Was Devastated'