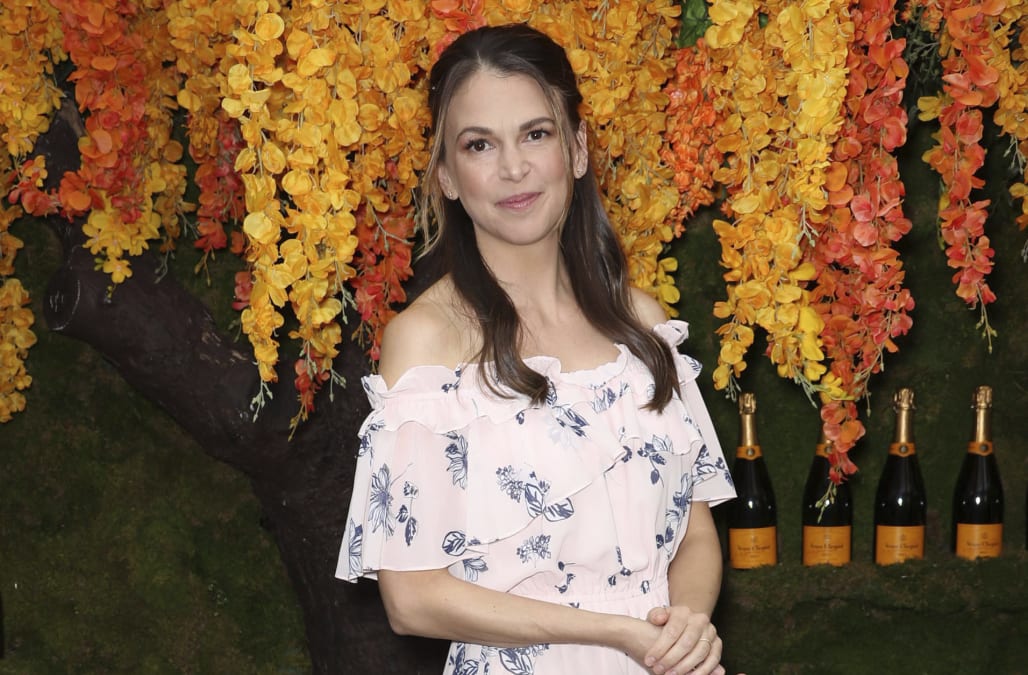 Sutton Foster is exactly what you imagine her to be.

The Broadway star and actress from the hit TV series, Younger, sat down with us recently and revealed why she partnered up with craft store giant, Joann, talked about the importance of female friendship, and why we shouldn't lose all hope for Team Josh.

AOL Entertainment: Tell me a little bit about why you decided to partner up with Joann.

Sutton Foster: It was just a no-brainer. Honestly, I feel so excited. I love creating something, I’m a big crocheter but I also love to draw.

AOL: That’s so awesome! What kind of crafts do you do around the holidays?

SF: Well I used to make these Christmas postcards, I used to make this every year. I love paper crafts, I would take a picture of my head and put myself like riding a sleigh down a hill and it would all be out of construction paper and [I would] create a snow scene. I would photocopy them and that would be my Christmas card every year. I try to make something every Christmas, I crochet, I have this garland that I made and put up every year.

SF: I’m not sure yet but I am going to make her Halloween costume! She’s going to be a Hawaiian princess, she loves Moana, so I think I’m going to do that. I’ve made her several baby blankets … I would love to make her a little sweater. I want to start delving into making clothes for myself but … maybe I should start with babies and make something for her.

AOL: Have you made anything for your “Younger” castmates?

SF: I made two items that were actually used in the show. So they had my character this past season, Liza, [give] a Christmas present to Josh of a crocheted hat, so I made the hat. So then she crocheted a scarf for Diana. I saw those items in the script and thought ‘I have to make that’ so I whipped them up -- I was very proud of that.

28 PHOTOS
Sutton Foster out and about
See Gallery

AOL: So we are huge fans of the show but we are so confused as to why Charles and Liza are looking really doubtful in the season finale! They finally have “everything” they wanted!

SF: I think they are [feeling] everything. That’s what makes it such a great scene, they’re not walking off into the sunset, they are walking off into the unknown. I think a lot of people can relate to that, it’s like when you’ve gotten everything you’ve ever wanted or thought you wanted and then you realize, ‘Wait, what now?’ So it’s not the end of them, it’s the beginning of them.

AOL: So everyone is very much #TeamCharles but is all hope lost for #TeamJosh?

SF: No! Never! [laughs] I think this is what makes this show great, you have two love interests who are actually viable and decent, and I think that’s what makes the show work in a weird way. But I have no idea! I always try to get stuff from the writers but they’re just going into the writer’s room, so I have no idea. I think Liza will step up and support Josh but we’ll see how everything works out.

AOL: Is there anything that you would want the writers to address on the show? They did a great job addressing #MeToo last season. I think it made a huge difference and impacted the show greatly.

SF: What I loved about last season is that they really leaned on Liza’s power. She became more of a boss and started owning her power. I would love for the writers to continue going in that direction. I also love that she always chooses her friends and chooses her career.

AOL: What do you hope -- especially young women -- take from this show?

SF: I think what I love about it is that it celebrates women, their ambition and drive, and are supportive of one another. It celebrates the female friendship and it’s not about women throwing one another under the bus to get ahead. It really is about that [we] are stronger together. And I love that it’s about women who talk more about their careers. I’m proud of that, it has substance.

This interview was edited and condensed for editorial purposes.

New season of Younger to air on the Paramount Network in 2019.

More from Aol.com:
‘Orange Is the New Black’ to end with season 7
Scripted comedy based on HGTV’s ‘Property Brothers’ in development at Fox
Kim Zolciak is accused of photoshopping her kids so they look thinner