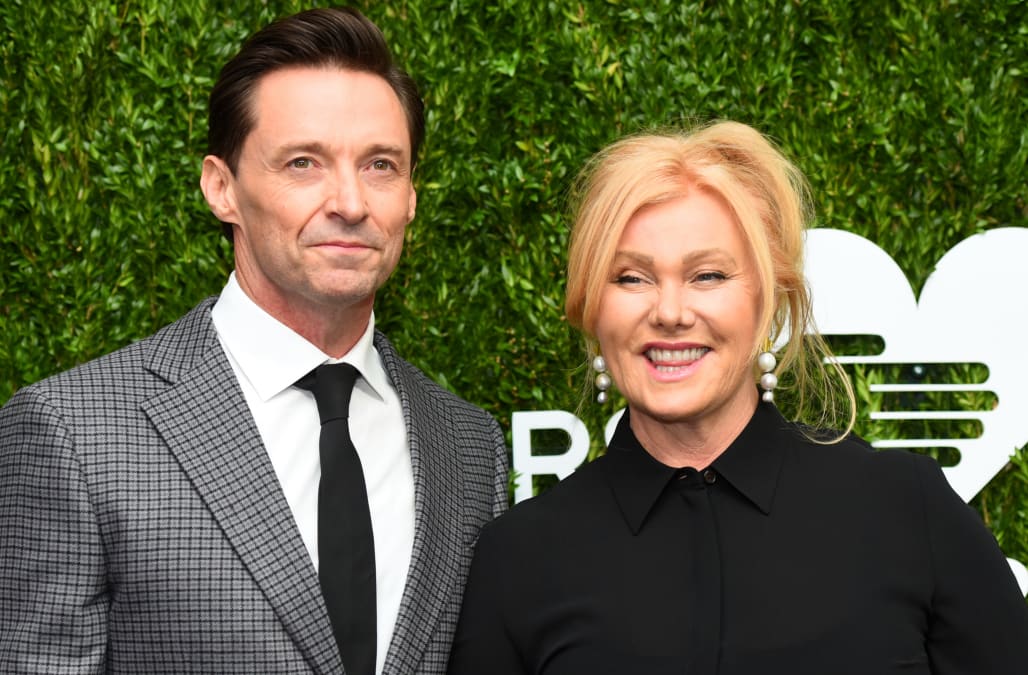 Celebs hit a variety of glamorous New York City events this week, including the American Ballet Fall Gala dinner, where big names like Katie Holmes (with her mother!), Ansel Elgort (with his girlfriend!) and Diane Sawyer stepped out in chic evening wear. Katharine McPhee, Hugh Jackman and Bette Midler also attended a slew of other events in notable looks.

"The Hills" star Audrina Patridge was spotted filming scenes for the upcoming "New Beginnings" reboot, while Owen Wilson and James Franco were seen at the Dodgers Game in L.A.

More of our favorite sightings this week came from Madonna, Howard Stern and Priyanka Chopra.

See them all below:

Aaron Carter and his girlfriend, Lina Valentina, stepped out for the 5th Annual CineFashion Film Awards 2018 at Saban Theatre on Saturday in Beverly Hills.

Hugh Jackman and wife Deborra-lee Furness stepped out for an event in NYC on Tuesday night.

Owen Wilson was spotted at the Dodgers game on Wednesday at Dodgers Stadium in L.A.

Madonna looked comfortable while out and about in NYC on Tuesday.

Prince Charles visited the Royal Lochnagar Distillery on Royal Deeside on Tuesday, where he was presented with a rare cask of single malt Scotch whiskey.

Gigi Hadid rocked some fun striped pants while leaving her apartment in NYC on Thursday.

Priyanka Chopra stepped out in New York City on Tuesday night in a button-front blue dress and strappy gold sandals.

Heather Graham attended the Global Down Syndrome Foundation 10th Anniversary Be Beautiful Be Yourself fashion show in Denver on Saturday night.

(Photo by Tom Cooper/Getty Images for Global Down Syndrome Foundation)

Rumer Willis channele Belle from "Beauty and the Beast" after an event on Thursday night in Los Angeles.

Ben Affleck was all smiles while running errands in Los Angeles on Tuesday, just a few weeks after leaving rehab.

G-Eazy peformed at The Kandy Halloween Party produced by Karma International on Saturday in Hollywood.

Jennifer Garner was on mom duty while out and about in Los Angeles on Tuesday.

Olivia Munn attended Luxury House by #spgamex, which was a one-night only event that brought to life the benefits of the new Starwood Preferred Guest American Express Luxury Card in NYC on Wednesday.

"Good Morning America" co-anchor Robin Roberts was stunning in pink outside of an event in Manhattan on Tuesday.

Olivia Palermo attended the opening of House of Peroni, which was curated by Art Production Fund, on Thursday night in New York City.

Justin Bieber took a phone call after a golf outing in Los Angeles on Tuesday.

Bette Midler was ravishing in red for an event in New York City on Tuesday evening.

Quincy Jones was pushed through LAX in a wheelchair on Wednesday.

Courteney Cox looked chic in a fitted black blazer and subtly-patterned pants in NYC on Tuesday.

Busy Philipps waved to paparazzi as she arrived for a taping of "The Late Show" on Wednesday in NYC.

Shia LaBeouf and Dakota Johnson posted with Zack Gottsagen at the Global Down Syndrome Foundation 10th Anniversary Be Beautiful Be Yourself fashion show in Denver on Saturday night.

(Photo by Tom Cooper/Getty Images for Global Down Syndrome Foundation)

Marilyn Manson stopped to take a selfie with a fan in Los Angeles on Wednesday night.

Model Sara Sampaio attended the "Taste of sbe" Grand Dinner at Skybar at Mondrian Los Angeles with Rolling Stone to benefit Make A Wish on Saturday in West Hollywood.

Fitness icon Denise Austin and her daughter, Katie Austin, who is following in her mother's footsteps, were photographed out and about with their luggage -- including a Scout Bag -- in New York City on Thursday.

Winnie Harlow was spotted at a Fendi event in Midtown on Tuesday night rocking -- you guessed it -- head-to-toe Fendi.

Quavo hung out on the set of Migos' upcoming music video in Hollywood, where he zipped around set on a customized Lime scooter.

Jennifer Garner looked cozy as she arrived for a flight out of LAX on Wednesday.

Rita Ora was all smiles leaving a recording studio in London on Thursday.

Ice-T talked to a New York City crowd about overcoming disabilities during a speech at the 2018 No Barriers Summit.

Nicky Hilton stepped out with her baby in New York City on Thursday.

Tiffany Haddish looked chic arriving for her flight out of LAX on Wednesday.

James Franco was spotted at the Los Angeles Dodgers game against the Milwaukee Brewers at Dodger Stadium on Wednesday.

Emily Ratajkowski was spotted walking and texting in SoHo on Wednesday afternoon.

Priyanka Chopra flashed a peace sign to paparazzi while stepping out in a bright red sweater, blue jeans and a black topcoat in NYC on Wednesday.

Emily Ratajkowski rocked an unusual black-and-white ensemble for an event in Manhattan on Tuesday.

Melissa McCarthy flashed a smile while walking into the BUILD Series studio on Tuesday afternoon in NYC.

Priyanka Chopra was photographed at LAX on Tuesday ready to take on the chilly weather.

Katy offered a surprise auction donation to amfAR - a day out to join her at Disneyland and Club 33, her favorite place. She went out of her way to ensure there are no blackout dates - the offer always stands. The charity was blown away by the $160,000 top donation for her generous and selfless offer to this amazing organization.

Fresh off of her "DWTS" elimination, Tinashe stepped out for dinner at Craig's in West Hollywood on Thursday.

DALLAS, TX - OCTOBER 27: Francia Raisa poses for a photo at the Unlikely Heroes 6th Annual Recognizing Heroes Charity Benefit at The Ritz-Carlton, Dallas on October 27, 2018 in Dallas, Texas. (Photo by Cooper Neill/Getty Images for Unlikely Heroes )
Up Next

More from Aol.com:
Emma Watson sparks controversy in 'Trans Rights are Human Rights' t-shirt
Katie Holmes stuns in the chicest Prada suit for a night out with her mom
2018 CMT Artists of the Year: Carrie, Miranda, Maren and more!