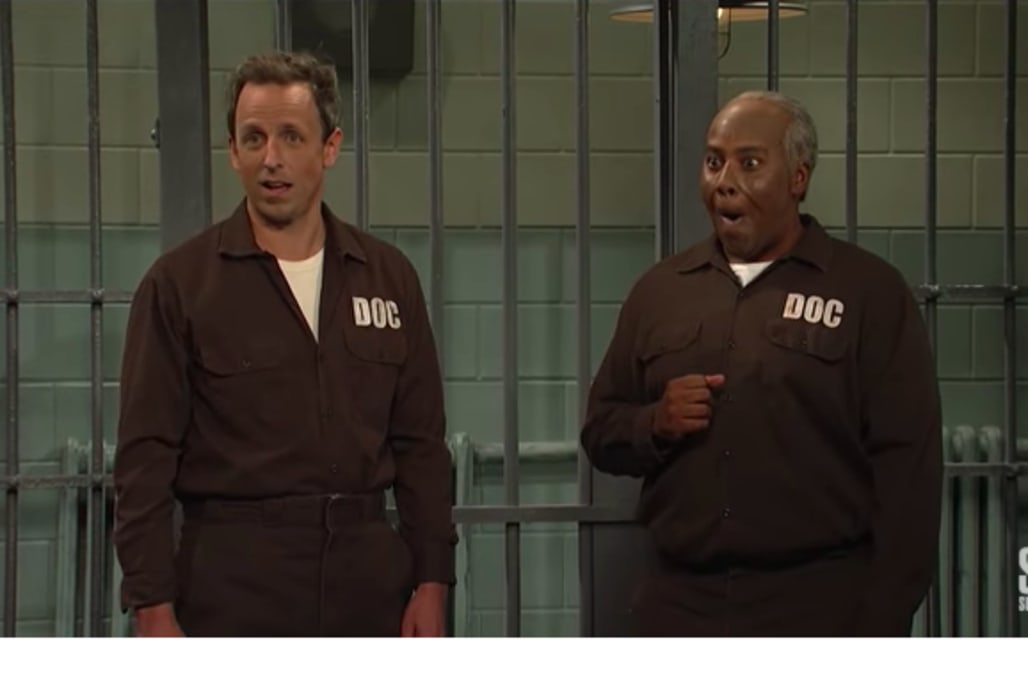 Kenan Thompson has played Bill Cosby on “Saturday Night Live” before, but now that the once-television icon has been sent to jail for sexual assault, the role has taken on new weight.

In the third episode of the 44th “SNL” season, Thompson donned a black DOC jumpsuit to portray Cosby as a prisoner, getting a new cellmate in episode host Seth Meyers. Meyers started the sketch by saying doing time “sucks,” to which Thompson’s Cosby replied, “Hey, you don’t come in here with your filth! … You need to get a job.”

Meyers said that on behalf of all of Cosby’s fans, it was “so disappointing” to be meeting him now, but Thompson’s Cosby wasn’t upset.

“I am in my prime,” he responded. “I am in jail and loving it — no kids with the darndest things, limited interactions with Camille, and when I was fighting incarceration, I had no idea that one of the staple foods of the prison system was Jello.”

Thompson’s Cosby also schooled Meyers on still calling him “doctor” and said he wanted to talk to the young black men in the jail, to tell them that if they “chose to wear their pants around the b-u-t-t, having the drawers hanging out, they should be in jail.”

He also started to complain about all the cursing on television these days, scatted while playing the spoons, danced, wrote a letter to “Elvin” aka Geoffrey Owens, called Meyers “Theo,” gave himself an applause break and had an Emmy award prominently displayed.

“Wow, you are just like Cliff Huxtable, except in one major way,” said Meyers.

Things took a serious turn toward the end, when Meyers pointed out that Cosby “damaged countless lives” and “should forget who you think you are and face what you actually did.” But he didn’t manage to get through to Cosby, who was left alone in his cell with his comfortable recliner, records and a pet turtle his failing eyes had convinced him was Quincy Jones.

Watch the Cosby prison sketch below: