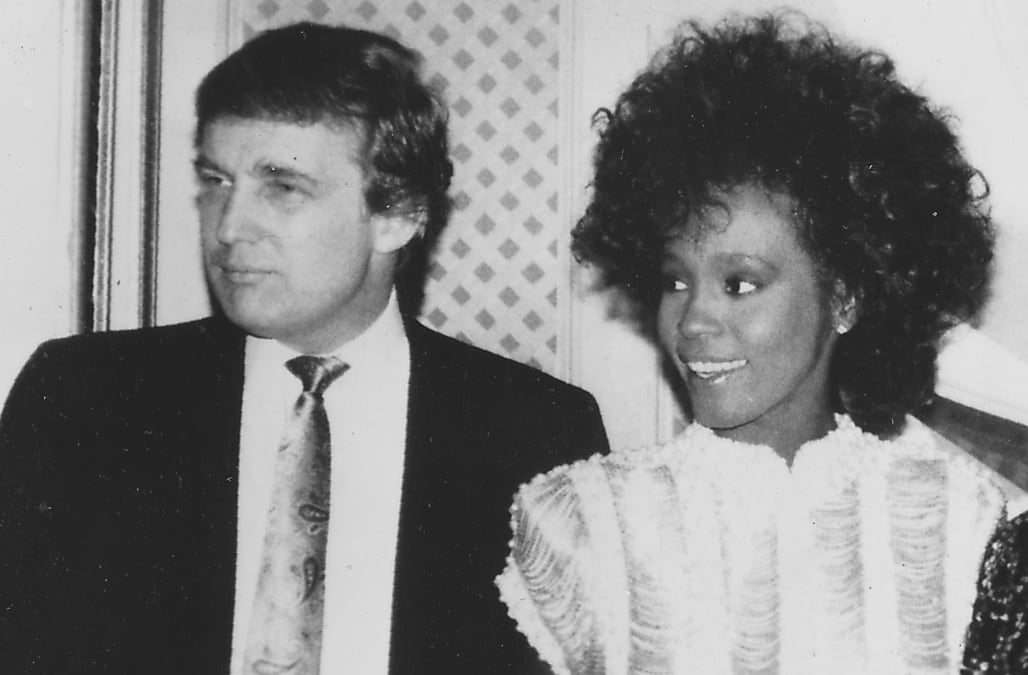 President Trump’s White House seemed like even more of a bizarre reality show on Thursday with Kanye West, sporting his MAGA hat, going in for a hug with the commander in chief in the Oval Office while an odd potpourri of other musicians, including Kid Rock and Big & Rich’s John Rich, roamed the West Wing.

The bill signing of the Music Modernization Act, reforming music licensing and royalties,brought this eclectic group to 1600 Pennsylvania Avenue — and it was an odd event not just for who was there but also for what was said. When Beach Boys singer Mike Love had his moment at the podium, he talked about how his buddy Trump has done so much for musicians “historically,” including trying to save Whitney Houston’s life.

Beach Boys' Mike Love tells Pres. Trump, "People can say what they want, but you've always been a big supporter of some of the best music America's ever made."

"I remember you tried your best to help get Whitney Houston in some kind of shape," he says. https://t.co/NkJuIoh4fPpic.twitter.com/ZcF1NcmbtQ

“I remember you tried your best to help get Whitney Houston in some kind of shape,” Trump supporter Love said, to which POTUS readily agreed, nodding and saying “sure” multiple times.

Love continued describing what seemed to be some type of intervention. “I remember being at Mar-a-Lago with this guy here. He had [billionaire businessman] Ron Perelman come down. You tried your best to help Whitney. And she’s not the only one you benefited and tried [to help].”

Love, who has been known to go off script (there have been comparisons between West’s and Love’s public rants), finished by saying, “People can say what they want, but you’ve always been a big supporter of some of the best music that America’s ever made.”

While there was definitely a Trump-Houston connection — they were friends, she visited Mar-a-Lago on multiple occasions, and he was one of just 100 guests at her 1992 wedding to Bobby Brown — and he’s spoken out about her troubles since she died in 2012, this was the first time he was publicly credited for trying to help combat her addiction issues. In fact, Trump was interviewed by numerous media outlets after she died and talked extensively about her problems and about who tried to help her. However, he didn’t admit to being one of them.

For instance, soon after Houston’s death, Trump said on the Wendy Williams Show that he knew both Houston and Brown “well,” but he “knew Whitney in particular. She was a friend of mine. They invited me to their wedding.” He said that Whitney performed for him “many times,” but in her later years she had lost her voice due to drug and alcohol abuse as well as smoking. “It was very sad. … It was certainly a different person in terms of that incredible voice, which was the best I’d heard.” He also said that her marriage to Brown was part of her downfall. “It was just not a marriage made in heaven. It was bad for her — very bad for her.” He said that post-marriage “she was trying desperately to make a comeback,” but it was a “tough go.”

During another interview with Headline News, Trump admitted Houston “had demons like anyone had demons” but allowed that “the drugs were a problem.” He had a chance to mention that he tried to help her in this interview but just said that the people around her failed her. “Something was missing,” he said. “She needed help. She was crying out for help. And the end result was what happened the other day in L.A.,” referring to her drowning death in a bathtub with drug paraphernalia strewn about. He didn’t mention, however, that he tried to help when she cried out.

And he didn’t mention it in his interview with Access Hollywood during that period either, offering just that music mogul Clive Davis, who made Houston a star, had done a lot to try to help Whitney.

Here I am with Whitney Houston at a party at Mar-a-Lago.

In another interview with — of all people — Access Hollywood‘s Billy Bush, he was asked if he agreed with Bill O’Reilly’s assessment that the media enabled Houston’s drug problems. “I think that’s true,” Trump said several years before he really launched his #FakeNews attacks. “When you’re a celebrity and a super-celebrity, people sort of do whatever you want to do. They don’t tell you what’s right and what’s wrong. You see with Michael [Jackson] with the drugs — so many people — probably Whitney. You can show up in terrible shape, and they’ll tell you how great you look.”

While we find it suspicious that Trump would pass on an opportunity to pat himself on the back, maybe he really did work behind the scenes to help the superstar, as Love claims. And as we look at the photos of Trump with West in the White House on Thursday — they were having lunch after the bill signing to discuss prison reform, together with Jared Kushner and Ivanka Trump — we can’t help but wonder if the two had any private conversations about this big reveal that Trump tried to save Houston. After all, West was recently ripped by the Houston family for paying $85,000 to use a photo of Houston’s “drug den” for the cover of Pusha T’s album Daytona. It would seem that Trump, such a great friend to Houston, might voice criticism about that.

Or not. It’s probably not on the “Make America Great Again” agenda.