'The View': Neil Patrick Harris calls out Whoopi Goldberg for comment she made 30 years ago 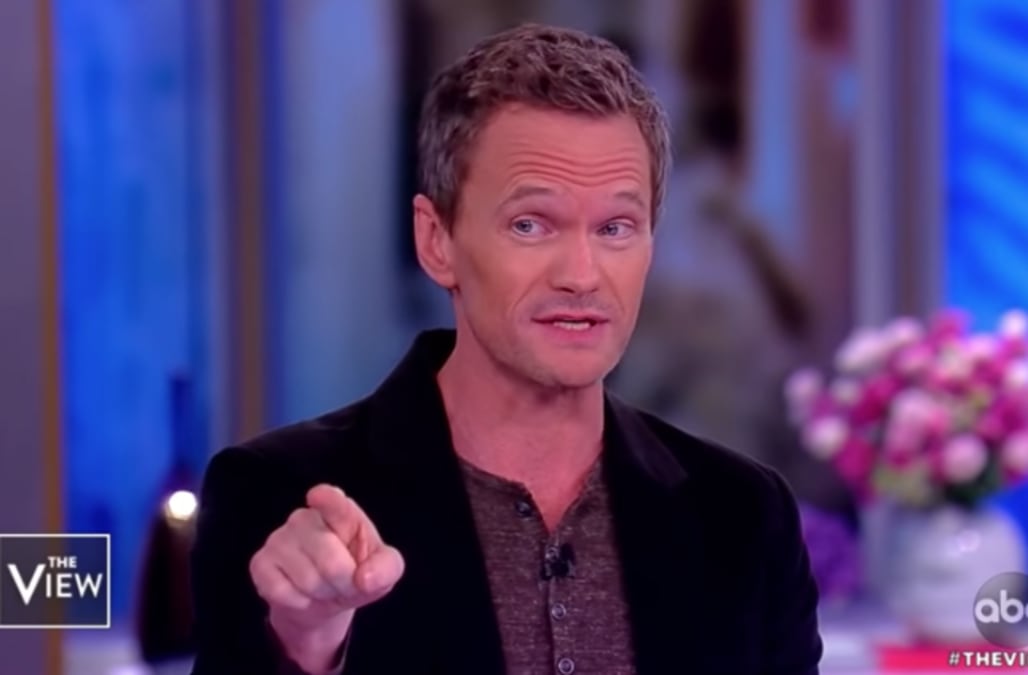 As the actor was discussing his children with the co-hosts of the ABC talk show, Goldberg suddenly started giggling to herself at her end of the table. "I'm laughing because I remember you at that age," she explained.

Well that was... INCREDIBLY AWKWARD!!! pic.twitter.com/KBhJT3qupp

The moment prompted a memory from 30 years ago of working with the television personality on the first movie of his career, 1988's "Clara's Heart."

The reveal prompted laughter, gasps and then a quick uncomfortable silence from the audience. Your move, Whoopi.

"I might've!" she exclaimed. "He had many questions as a kid, so I said, 'Listen, wait 10 years, and I'll take you through it.' In those days, you could actually have some fun like that. You can't do that now. People get very upset now."

"Hey, I was not offended," Harris responded. "I'm looking forward to it."

"Well, if I can find it, you can have it!" Whoopi shot back.

Neil Patrick Harris and David Burtka with their kids
We attended the @saks Holiday Window unveiling last night. The 14 Snow White inspired windows are spectacular, as was the first-rate light/projection/firework/production show staring the beautiful Snow White herself! Our family is finally feeling fully festive. #ad #saksholiday
Everyone knows I love a good meal! That's why I'm super excited to be a #CapitalOnePartner for the new @CapitalOne Savor card launch. It rewards you for doing the things you already love to do - which for my family, always includes something delicious. #SavorMoments
NEW YORK, NY-SEPTEMBER 1:(EXCLUSIVE COVERAGE) 'Wigstock' Producer Neil Patrick Harris, son Gideon Scott Burtka-Harris, daughter Harper Grace Burtka-Harris and husband David Burtka pose backstage at 'Wigstock 2.HO' at The Pier 17 Rooftop on September 1, 2018 in New York City (Photo by Bruce Glikas/Getty Images)
Fantastic Papa/Daughter date yesterday. We shopped for her brother, got our nails did, and crushed some crudo at @eatalyflatiron. This is the best age! For both of us! #scallops #urchin #grateful
Family Dinner Night! Excited to partner with @CapitalOne for the awesome new Savor card launch – it rewards you for two things we dig – food and entertainment! #SavorMoments #CapitalOnePartner
The entire Burtka-Harris family saw Harry Potter and the Cursed Child on Broadway today. Both parts in one day - over 5 hours! We loved it so much, we’d do it again tomorrow. Bravo, everyone involved. You inspire me to be better, to hug my kids, and to seek out magic. @hpplayus
Happy Easter from my family to yours. #dbelish #greatgoodtimes
NEW YORK, NY - NOVEMBER 20: David Burtka, Harper Grace Burtka-Harris, Neil Patrick Harris and Gideon Scott Burtka-Harris attend the Cinema Society Screening Of 'Moana' at Metrograph on November 20, 2016 in New York City. (Photo by J. Kempin/WireImage)
On holiday with the family. #ouioui @dbelicious
The loveliest of travel compagnons. Merci, @dbelicious & @eltonjohn & @davidfurnish & our four amazing kids for such fond memories. #families #grateful
David Burtka is one of the great dads, bar none. He is kind, selfless, zany, honest, strong, wise and a bright beacon of love. Gideon and Harper truly lucked out, as did I. Happy Father’s Day, @dbelicious. We love you a ton. #grateful
NEW YORK, NY - OCTOBER 15: Host David Burtka, actor Neil Patrick Harris and Gideon Scott Burtka-Harris and Harper Grace Burtka-Harris attend the Food Network & Cooking Channel New York City Wine & Food Festival Presented By Coca-Cola - Coca-Cola Backyard BBQ presented by National Beef hosted by Andrew Zimmern and Pat LaFrieda at Pier 92 Rooftop on October 15, 2017 in New York City. (Photo by Jason Kempin/Getty Images for NYCWFF)
I am sure missing my three favorite valentines today. I am sending lots of love and light to my wonderful family. ❤️Plus, HAPPY VALENTINES DAY TO YOU ALL!
Happy Father's Day to the coolest Papa I know. Thanks for being the best Co- parent a guy could ask for.
First day of school! Gideon and Harper are officially second graders! #proud #papa #timeflies 📷 = @dbelicious
Just, love.
Happy NYC Pride! How fortunate David and I are to live in a time and place that allows these two spectacular monkeys to grow and learn and love with honesty, freedom, diversity, and enthusiasm. So, so proud. 🌈 @dbelicious
Up Next

People on Twitter were definitely confused by the exchange, with one person saying, "Well that was... INCREDIBLY AWKWARD!!!"

Others questioned Harris' motives in bringing up the conversation all these years later, especially in this climate.

"This will undoubtedly lead to Whoopi being crucified," another person wrote. "I just wanna know if that is indeed what @ActuallyNPH was aiming for or was it brought up humorously?"

"Disgusting!" someone else chimed in. "Glad he confronted her about it."

Watch the full moment below: