Michelle Obama shares the secret to her successful marriage 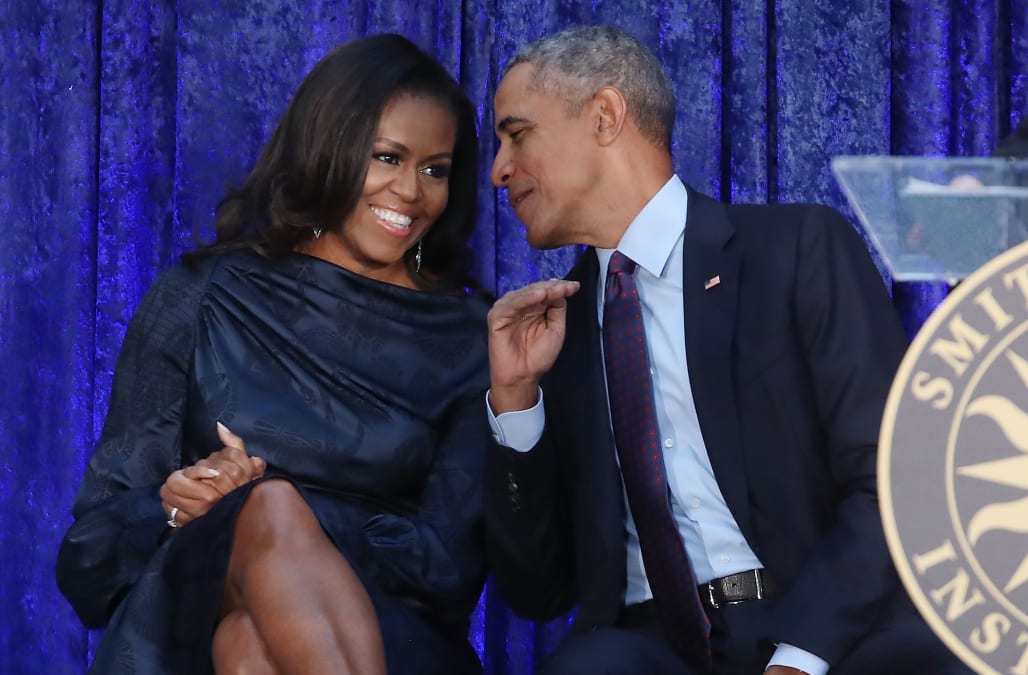 In 2018, few public figures are as beloved as Michelle Obama. Her strength, wit and confidence have inspired generations. But, would she ever consider running for public office like her husband, former president Barack Obama?

“Absolutely not,” she answered on Tuesday's Today show while there to help celebrate International Day of the Girl. “'As a woman, you understand where your voice works best. Where you want to operate. What space you want to be in. I have never wanted to be a politician, you know, and it’s one of those things that… nothing has changed in me to make me want to run for elected office.”

“I want to serve. I want to do work. I wanna to be out there,” she continued. “But there’s so many ways to make an impact. Politics is just not my thing, it’s as simple as that. And that’s what I want these girls— Find your passion. Don’t let somebody tell you what they think you should be. It’s up to you to determine [what's] your message and how you want to use your voice.”

“Would you ever run for elected office?” @savannahguthrie asks @MichelleObamapic.twitter.com/AUASXkrP0E

The 54-year-old former first lady also opened up about how she and her husband maintain a loving marriage after all these years, but especially after the bustle of the White House.

“One of the keys to a successful marriage is separate bathrooms,” she shared. “When he enters my bathroom sometimes I’m like, ‘Why are you in here?’ And he’s like, ‘I live here. Can I enjoy my bathroom too?’ He’s been good. We’ve both been busy. We’re working on books, so that keeps us busy… And we’ve got kids in college. One kid in college [Malia]. One on the way [Sasha]. So we’ve got a senior in high school, so it’s all the drama that goes with… senior year is quite intense because it’s testing, it’s applications, it’s grades. So we are riding that wave with our seniors.”

“One of the keys to a successful marriage is separate bathrooms.” @MichelleObama says about living with @BarackObama in their house #DayOfTheGirlTODAYpic.twitter.com/Odid5WhE0C

US Democratic presidential candidate Senator Barack Obama (D-IL) is seen with his wife Michelle in a family snapshot from their October 18, 1992 wedding day released by Obama's US presidential campaign, February 4, 2008.

Candidate for the U.S. Senate Barack Obama (D-IL) sits with his wife Michelle and daughters Sasha (L) and Malia (R) in a hotel room as they wait for election returns to come in November 2, 2004 in Chicago, Illinois. Obama is expected to win easily against the Republican candidate Alan Keyes.

President elect Barack Obama and his wife Michelle wave to their supporters after Obama gave his victory speech during an election night gathering in Grant Park on November 4, 2008 in Chicago, Illinois. Obama defeated Republican nominee Sen. John McCain (R-AZ) by a wide margin in the election to become the first African-American U.S. President elect.

Democratic presidential nominee U.S. Sen. Barack Obama (D-IL) (L) kisses his wife Michelle Obama laugh at the end of the Town Hall Presidential Debate at Belmont University's Curb Event Center October 7, 2008 in Nashville, Tennessee. Tonight's debate is the second presidential debate of three, the only one being held in the town hall style with questions coming from audience members.

US Democratic presidential candidate Illinois Senator Barack Obama and his wife Michelle embrace during an election day speech at the end of the 2008 Democratic Party primaries, at the Xcel Energy Center in St Paul, Minnesota, on June 3, 2008.

Democratic presidential candidate US Senator Barack Obama stands with his wife Michelle during a primary results rally in Raleigh, North Carolina, May 06, 2008.

US President Barack Obama (R) and First Lady Michelle Obama (L) dance during their visit to the Western Inaugural Ball on January 20, 2009 at the Washington Convention Center in Washington, DC.

First lady Michelle Obama (L) stands with her husband U.S President Barack Obama, as they wait for Mexican President Felipe Calderon and his wife Margarita Zavala to arrive for a State Dinner at the White House on May 19, 2010 in Washington, DC. President Obama welcomed President Calderon to the White House today for an official state visit that is taking place amid tension over immigration politics and Mexico's deadly drug war.

US President Barack Obama and First Lady Michelle Obama chat as they walk to the White House in Washington, DC, on December 14, 2011 upon returing from Fort Bragg, North Carolina, where they met US troops. Obama on December 14, honored America's nearly nine years of 'bleeding and building' in Iraq, hailing the 'extraordinary achievement' of a war he once branded 'dumb.'

US President Barack Obama and First Lady Michelle Obama wait to greet Britain's Queen Elizabeth II and Prince Philip, the Duke of Edinburgh, for a reciprocal dinner at the Winfield House in London, on May 25, 2011. Obama and his wife Michelle enjoyed a regal welcome from Queen Elizabeth II, who has met every US president but one since the 1950s. Obama's visit, the second stop on a European tour, comes as Britain seeks to prove its staying power despite fading military might and Washington looks to retool its decades-old alliance with Europe as a catalyst for global action.

U.S. President Barack Obama (R) looks at his wife, first lady Michelle Obama (L), as she speaks during a reception in honor of International Womenï¿½s Day at the East Room of the White House March 8, 2010 in Washington, DC. The reception honored women from around the world and their achievements.

U.S. President Barack Obama has his tie adjusted by first lady Michelle Obama as they await the arrival of Chinese President Xi Jinping and Madame Peng Liyuan for a State Dinner at the White House in Washington, September 25, 2015.

U.S. President Barack Obama and first lady Michelle Obama perform a reading of the children's book "Where the Wild Things Are" for children gathered for the annual White House Easter Egg Roll on the South Lawn of the White House in Washington, March 28, 2016.