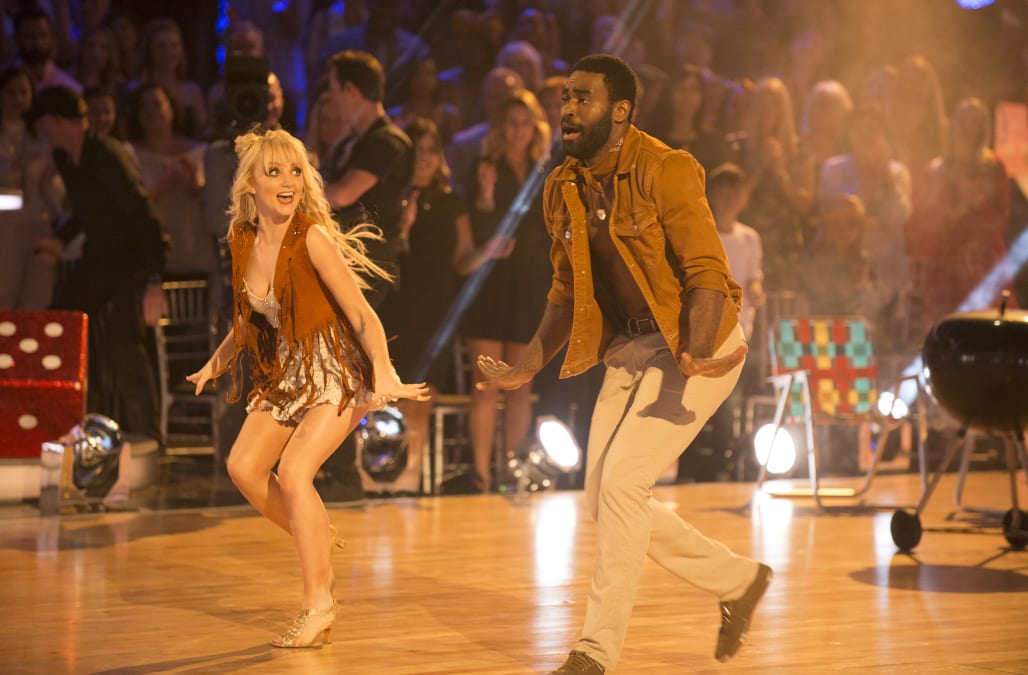 Evanna Lynch is ready to tell her story.

The 27-year-old actress and her Dancing With the Stars partner Keo Motsepe are bringing the Harry Potter magic to the ballroom by dancing the Viennese Waltz to the tune of the iconic "Hedwig's Theme." The J.K. Rowling franchise is near and dear to Lynch's heart, as she portrayed Luna Lovegood in four films.

Before taking the stage next week, ET's Katie Krause was with Lynch and Motsepe at theirDWTSrehearsal on Thursday, where Lynch reflected on how the famous franchise helped her with her body issues and overcome an eating disorder.

"I believe on raising awareness on this issue and it's very healing for me to talk about this stuff," she confessed. "I wanted to talk about how before Harry Potter, I was quite sick, and how the Harry Potter books really helped me through an eating disorder. And the reason I wanted to talk about it on here, it's really healing for me… That is the full story, that's the only kind of honest way to tell it, and that's why it was so special because it was the only kind of light that I saw in the world at a very dark time."

Adding that getting her Harry Potter role was a "fairy tale," Lync,  however, doesn't want her story to be sensationalized and for people to think that her mental issues were "cured" just because she got the part.

"Those kinds of issues, they are never that neat and sometimes it upsets me the way the story is told. Like, 'Oh, you get Harry Potter and your mental illness is cured?'" she explained. "That's a wrong message to send, an unhealthy message to send, and that's really not the truth. So I'm really grateful for the opportunity to tell it myself."

What she wants people to know is that these kinds of issues are an everyday internal fight. "You are constantly having to choose between the negative voice that's in your head telling you that you're terrible at everything, that you suck," she said. "And the then voice saying, 'No, I can be something.' That's what the work is every day. Being brave enough to say, or not brave enough, but just making the choice to say, 'I'm going to choose love.'"

"I could not have gotten through doing the Harry Potter films if I had continued down that route," she acknowledged, adding that you must change your way of thinking. "I just wanna say that once you put yourself out there and believe in yourself, things happen."

As far as how she feels about Luna being a role model for others, Lynch is "happy to be in service to that character and that message."

"[Luna] is such a message for light and hope and love in the world," she stated. "I'm happy to kind of carry that torch for her."

As for her Harry Potter-themed performance next week, Motsepe admits he's "feeling the pressure," but that's only because he wants to make Lynch proud.

"I'm feeling pressure every day because I think that's what [Harry Potter] fans are looking forward to," he explains. "But also I don't want to run away from her story. I need to be very careful in what I do and how I choreograph this dance because it's very special to her."

Meanwhile, Lynch's Harry Potter co-starScarlett Byrne, who played Draco Malfoy's girlfriend, has been at every DWTS show this season. Lynch, however, hasn't extended an invite to J.K. Rowling just yet, but still keeps in touch with the author. "I love her and we still write letters occasionally, but I don't like to bother her with every little thing," she shares. "I invite her to my shows and films, and she's amazingly supportive. But she's got a franchise and a book series and everything going on."

Dancing With the Stars returns Tuesday at 8 p.m. ET/PT on ABC. ET will be covering the show in real time on our live blog, which kicks off when the show commences.