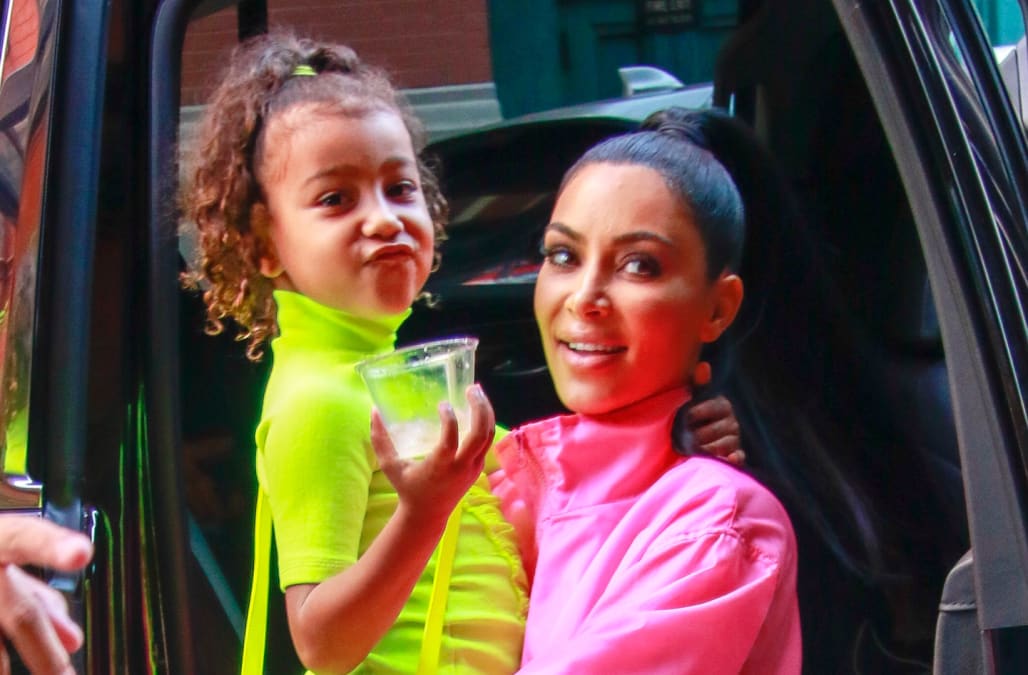 The Kardashians were spotted all around the Big Apple over the weekend, as much of the famous family was in town for Kanye West's "Saturday Night Live" performances. Kourtney and Kim were joined by North, Saint, Penelope, Reign and Mason, as well as Kourtney's ex, Scott Disick.

Across the pond in Paris, a slew of high-profile names were photographed out and about during Paris Fashion Week. Pamela Anderson, Anne Hathaway, Joe Jonas, Sophie Turner and Olivia Wilde were among the famous faces sitting front row at the biggest designers' shows.

Pamela Anderson was stunning in white at the Chanel show at Le Grand Palais during Paris Fashion Week Womenswear on Tuesday in Paris.

Anne Hathaway and husband Adam Shulman made a rare joint outing together for the Givenchy show during Paris Fashion Week on Saturday.

Scott Disick was spotted out to lunch with his kids, Mason and Penelope, on Sunday in New York City.

Ben Affleck looked buff during an outing amid his continued rehab stint on Monday in Los Angeles.

Bradley Cooper and Irina Shayk were all smiles as they took their daughter, Lea, for a walk in New York City on Thursday.

Christina Aguilera posed with Bill and Hillary Clinton backstage at Radio City Music Hall, where the Clintons caught Aguilera's latest stop on her The Liberation Tour.

Kourtney Kardashian stepped out for dinner with her family on Saturday night in New York City.

Paris Hilton and Nicky Hilton Rothschild attended the launch of nail & bone by Paris Hilton -- a collection of nail polish named after Paris' dogs that will donate 20% of proceeds to Animal Haven -- during Tails & Nails at Animal Haven on Saturday in New York City.

Kate Middleton made her first official public appearance since giving birth to Prince Louis at the Sayers Croft Forest School and Wildlife Garden in London on Tuesday.

Joe Jonas and Sophie Turner stepped out together during Paris Fashion Week on Monday.

Olivia Wilde struck a pose outside of the Valentino fashion show during Paris Fashion Week on Sunday.

Carey Mulligan and Jake Gyllenhaal attended the after-party for the premiere of "Wildlife" presented by Casa Noble Tequila at The Ribbon.

"Dancing With the Stars" front-runner Tinashe stepped out for dinner at Craig's in West Hollywood wearing an eye-popping neon look after Monday night's episode.

Cardi B was all smiles after turning herself in at the 109 Police Precinct in Flushing, New York on Monday morning.

Lindsay Lohan was photographed strolling on the avenue Montaigne on Monday in Paris.

Wendy Williams rocked a Fendi sweatshirt and Daisy Duke shorts while entering 30 Rock for "SNL" on Saturday in NYC.

Lil Kim made a surprise appearance during Christina Aguilera's show at Radio City Music Hall for her Liberation Tour on Wednesday night.

Saint West held his nanny's hand and enjoyed some gummy candy while stepping out with his family in New York City on Sunday.

Madonna rocked a Yankees puffer jacker as she exited the Ritz in Paris on Monday.

Nicky Hilton Rothschild went for a walk with her daughter, Teddy, 9 months, in NoHo on Wednesday.

Elizabeth Hurley made a glamorous arrival in New York to support the 2018 Estee Lauder Breast Cancer campaign. She's a global ambassador for the initiative -- and definitely wears the title well!

Sarah Hyland kept it casual in a yellow halter dress while out and about in Los Angeles on Sunday.

Kate Mara looked chic outside of the Miu Miu show during Paris Fashion Week on Tuesday.

Jennifer Garner and Ben Affleck were spotted attending church together in Los Angeles on Sunday.

Christmas shopping already! Mom of two Sarah Michelle Gellar took a look at the all-new HatchiBabies to the Hatchimals Family.

Kim Kardashian and North West rocked neon looks for a mother-daughter outing in NYC on Saturday.

Roger Federer pushed his own luggage through Narita International Airport on Monday in Narita, Japan.

Lea Michele was spotted out and about in New York City on Monday rocking a casual sweater and jeans look.

The cast of "Real Housewives of Dallas" attended a "Paint and Sip" class with Bluprint instructor and designer Adam Vicarel for the latest episode of their Bravo hit.

Juliette Lewis stunned at the the Miu Miu show during Paris Fashion Week on Tuesday.

Zayn Malik was spotted out and about in NYC on Monday night near girlfriend Gigi Hadid's apartment.

Alicia Vikander and Michael Fassbender made a rare public outing together on Monday night in Paris.

Past and present 'SNL' stars collided as the long-running sketch show was honored by BAFTA and Cadillac. Aidy Bryant, Beck Bennett, Fred Armisen and Colin Jost were among the guests on hand to celebrate Lorne Michaels (and their sweet Cadillac rides to the event).

Dita Von Teese rocked a satin pink blouse and high-waisted black pants as she celebrated her birthday at No. 10 Restaurant over the weekend in Los Angeles.

Shailene Woodley stepped out for the Louis Vuitton show on Tuesday night during Paris Fashion Week.

Anwar Hadid looked ready for bed in a cozy Balenciaga sweater as he entered sister Gigi Hadid's apartment on Monday.

Jonah Hill was seen walking around NoHo smoking a cigarette on Monday afternoon ahead of a private screening of his upcoming film, "mid90s."

Kim Kardashian strutted her stuff while out and about in New York on Sunday.

"Real Housewives of Beverly Hills" star Lisa Rinna was snapped waiting at a valet in Los Angeles on Sunday in casual attire.

New cast member of "The Hills," Mischa Barton, grabbed a celebratory dinner at Craig's in West Hollywood on Wednesday.

Alexa Chung was all smiles as she attended the Miu Miu show during Paris Fashion Week on Tuesday.

Kim Kardsahian was photographed chatting on the phone while out in TriBeCa on Sunday in a skintight ensemble.

Maria Menounos showed off a cropped 'do while out and about in New York City on Tuesday.

Eva Longoria posed for paparazzi outside of "The Late Show with Stephen Colbert" on Tuesday in NYC.

"Impractical Jokers" cast stepped out in NYC for an intimate show at Carolines on Broadway on behalf of Chase and IHG’s new Rewards Club credit cards.