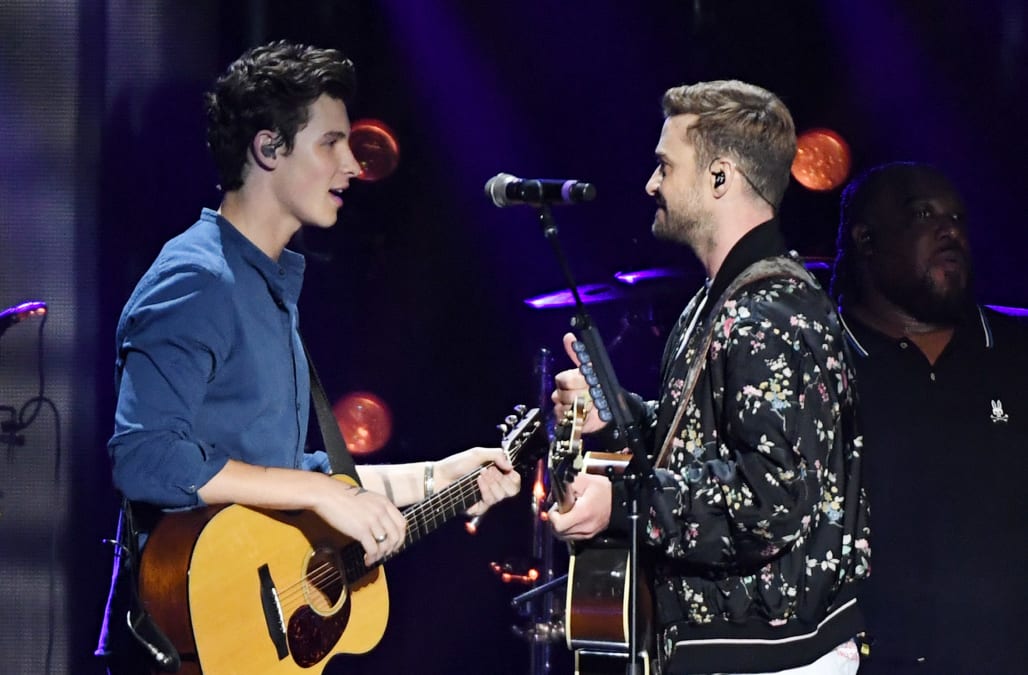 Shawn Mendes and Jimmy Fallon are duking it out over a mutual friend!

The 20-year-old pop star stopped by The Tonight Show Starring Jimmy Fallon on Thursday and dished on his friendship with Justin Timberlake, who recently brought him up on stage at the iHeartRadio Music Festival.

Mendes gave the same answer twice more before realizing Fallon was teasing him.

"It was the coolest thing of my entire life," Mendes said sincerely of his performance of "What Goes Around..." with Timberlake, 37. "Who's the better friend now?"

"No, I just hang out with him outside of fake social media," Fallon shot back. "I'm really his friend."

The pair seemed to get back on a congenial level when Fallon told Mendez that he knows Timberlake likes him. "He, does yeah. I think he does. I hope he does," Mendes said.

"He definitely does," Fallon assured. "I mean he likes other people too. He doesn't like everybody."

"He likes a lot of people," Mendes corrected.

"Eh not really. He's very selective, actually," Fallon jokingly said. "The more I think about it, he only likes one person."

Mendes went on to brag that it's "very rare" for Timberlake to bring other singers on stage with him, before marveling at all the other singers he's been able to work with.

"In all honesty, I got to play with him, John Mayer and Ed Sheeran within the same two years," he said. "I mean, I'm pretty sure the first time we spoke you asked me who one of my idols was and I said Justin Timberlake."

"Dude, it was just insane... He's so nice and so insanely talented," the "In My Blood" singer continued. "...Every time somebody goes, 'Who are your idols?' I say his name, but I always add, not just as a musician, but as a person. Like, everything he's been able to do, just the way he is. You, know he's just a great person."

Mendes didn't let the moment slip away without one more dig at Fallon. "Anyways, it was cool. He likes me more," he joked.

Thank you @justintimberlake for being such an incredible guy

Fallon, perhaps annoyed at the turn of events, went on to have Mendes recount the time he fell on stage when Dave Grohl was in the audience.

"I was actually more amped up [than nervous]. I was like, 'Dave Grohl's here. I don't know what I'm going to do, but I'm gonna do it. Whatever that is,'" Mendes recalled. "And I'm on stage and I'm really feeling the show and I'm like, 'This is my moment.'"

The "Stitches" singer decided he'd jump down to a lower portion of the stage -- which was "a lot lower than I thought it was" -- to impress Grohl, who was there with his daughter.

The host showed the hilarious clip on air to which Mendes quipped, "It looked like my first time ever trying to jump."

live footage of me jumping to conclusions pic.twitter.com/tI6Tz7Xpi5

Mendes took the embarrassing moment in stride, revealing that his friendship with Grohl has blossomed as a result. "Now we just text about barbeque and stuff. It's great. We have a good friendship. Like me and JT," Mendes joked. "It's similar."

"You have David Grohl's phone number? I've got to talk to Justin about that," Fallon insisted.

More from ET Online:
Reese Witherspoon celebrates book launch with pals Joanna Gaines and Jenna Bush Hager
Meghan Markle and Prince Harry to make first visit to sussex
How Ben Affleck plans to adjust to a sober lifestyle & where he stands with the women in his life (Exclusive)