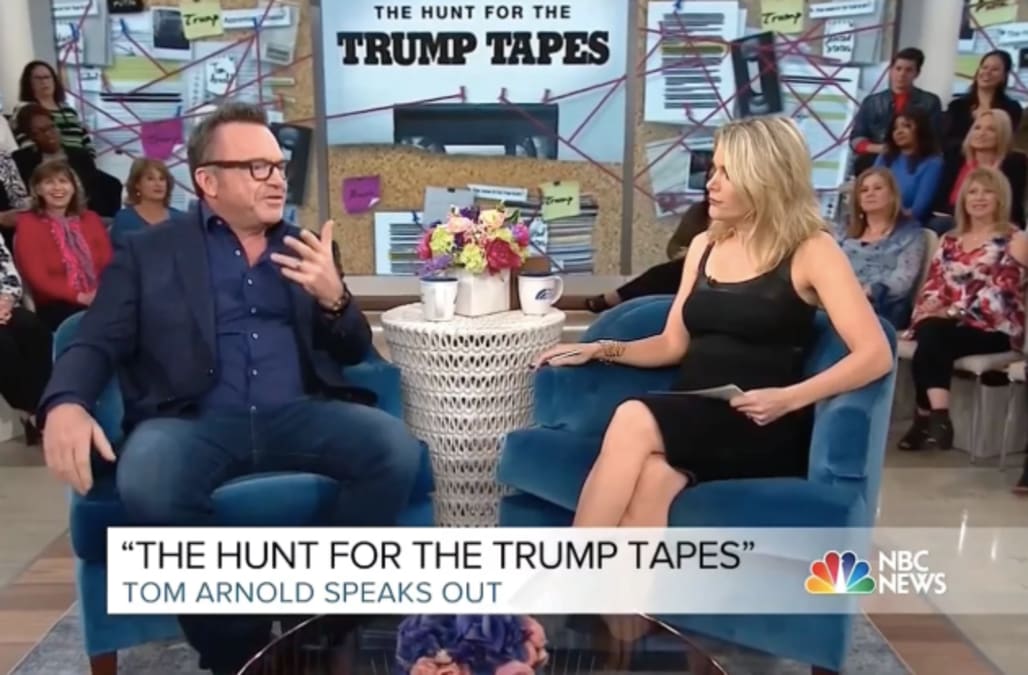 Tom Arnold is fiercely defending himself after an alleged altercation with The Apprentice executive producer Mark Burnett at a pre-Emmys party on Sept. 16.

The 59-year-old actor dropped by Megyn Kelly Today on Tuesday, where he and host Megyn Kelly got into a war of words over the incident. To clarify, Arnold and Viceland have created a new show, The Hunt for the Trump Tapes With Tom Arnold, in which the veteran performer attempts to get his hands on alleged footage of now-President Donald Trump saying a number of troubling things including the N-word during his days as a reality star. This has led to him pursuing Burnett as a means to getting the supposed footage released, culminating in the alleged fight last weekend.

During the visit to the daytime show, Arnold pushed back against Burnett’s wife, Roma Downey’s, claim that he bruised her during the alleged scuffle.

“She’s like, ‘I’m going to be with my CEO husband when he assaults someone and I’m going to say that person assaulted me. I’m going to lie,'" Arnold said.

When Kelly asked him to clarify that he denies her claims of assault, he replied: "I didn't even see her there. That bruise is five days old… First of all, think about this, I went to the party, allegedly uninvited. According to them, I beat up the CEO of MGM and his wife and then I didn’t get arrested or anything and I got to stay at the party all night.”

Kelly attempted to cut him off but he refused to be silenced, claiming his reputation is being dragged through the mud, which he doesn’t want his kids to see without him setting the record straight.

“Let’s be honest, if you did assault her as she claims, it’s no laughing matter,” Kelly stated.

“If she said I assaulted her, it’s no damn laughing matter, Megyn, right?” he countered.

A source previously told ET that Arnold's confrontation with Burnett was a "publicity stunt."

"They feel very set up," the source added. "They were basically ambushed. [Tom] got exactly what he wanted or intended to get because he's all over the news." The source also claimed that Arnold had a camera crew in tow to capture the moment.

During his chat with Kelly, Arnold also claimed to have seen the tapes of Trump saying the N-word at MGM and invited the 47-year-old journalist to take a trip with him to check it out.

“I don’t think I’m going to take a field trip with you,” she responded. “But I would like to know if it exists.

Check out the full interview above.

The Hunt for the Trump Tapes With Tom Arnold airs on Tuesday nights a 10:30 p.m. on Viceland.