Celeb Spotter 075: Stars step out at NYFW, US Open and Venice Film Festival 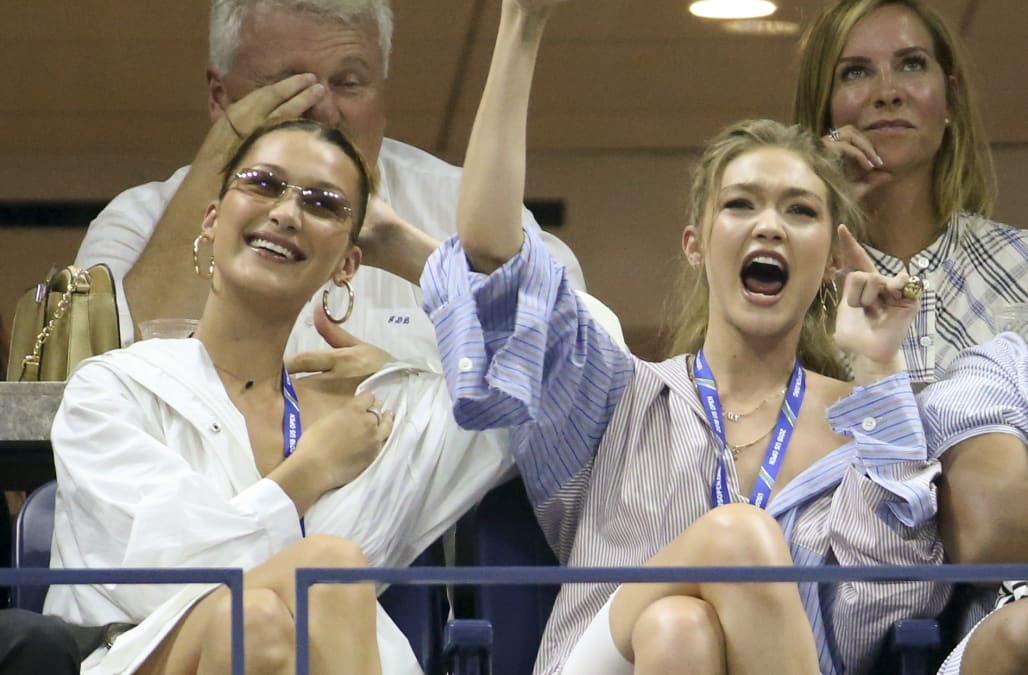 Wednesday night's Tom Ford show pretty much kicked off the madness that is NYFW, with a slew of huge names like Nicki Minaj, Cardi B, Tom Hanks and Hailee Steinfeld all stepping out for the invitation-only event. Also celebrating the beginning of fashion week were the likes of Olivia Culpo, Nina Garcia and Ashlee Simpson.

Across the city at the US Open, stars continued to take in the action at Arthur Ashe Stadium. Joe and Nick Jonas went on a double-date with Sophie Turner and Priyanka Chopra to catch Serena Williams in action, while Ashley Graham, Aziz Ansari and Emily Ratajkowski were also all spotted in the stands.

Celeb Spotter 075: Stars step out at NYFW, US Open and Venice Film Festival

Tom Hanks, Rita Wilson and their son, Truman Theodore Hanks, posed for paparazzi outside of the Tom Ford fashion show on Wednesday night in NYC.

Bella Hadid and Gigi Hadid cheered on pal Serena Williams during her quarterfinal win at the US Open on Tuesday night.

Cardi B was all smiles as she arrived at Tom Ford's SS19 fashion show at the Park Avenue Armory on Wednesday night.

John Legend and Chrissy Teigen were photographed leaving the GQ Men of the Year Awards at Tate Modern in London on Wednesday night.

Jennifer Garner rocked a floral skirt and a simple sleeveless black top while leaving her hotel in New York City on Thursday.

Double date! Sophie Turner, Joe Jonas, Nick Jonas and Priyanka Chopra sat together at the US Open on Tuesday night.

Nicki Minaj struck a pose as she entered a fashion week event on Wednesday night in New York City.

Ashlee Simpson and Evan Ross were all smiles while out and about in New York City on Wednesday night for a NYFW kick-off event.

Olivia Culpo struck a pose in a stunning silver look at the E! Fashion Week launch party on Wednesday night.

Ariel Winter and Levi Meaden rocked matching ensembles while out and about in Los Angeles on Monday.

"Real Housewives of Beverly Hills" stars Kyle Richards and Lisa Rinna were spotted filming a scene over lunch in Los Angeles on Monday.

Olivia Wilde shared her excitement about how the UN's Sustainable Development Goals have been integrated into the content of Thomas & Friends, a favorite TV show of her own kids, in New York City.

Nick Jonas and Priyanka Chopra cozied up in a suite at the US Open on Tuesday night.

Brie Larson danced the night away at the after party for Rodarte's SS19 show, where guests sipped on Ruffino Wine, on Sunday night at the Jane Hotel.

Naomi Watts was the Queen of Hearts while out and about during the 75th Venice Film Festival on Thursday in Venice, Italy.

Pregnant model Slick Wood flaunted her baby bump in a shirtless ensemble while out and about in New York City on Wednesday night at the beginning of fashion week.

Kaia Gerber was photographed outside of the gym in TriBeCa on Wednesday ahead of NYFW.

Chloe Grace Moretz attended the "Greta" premiere party at Weslodge on Thursday, the opening night of TIFF in Toronto.

Hailee Steinfeld posed for the paparazzi outside of Tom Ford's NYFW show on Wednesday night.

Ashley Graham and Justin Ervin cuddled up at the US Open on Wednesday night.

Emily Ratajkowski and husband Sebastian Bear-McClard sat in the Grey Goose suite in Arthur Ashe Stadium on Wednesday night at the US Open.

Ewan McGregor and his daughter Clara McGregor were photographed arriving at the Narita International Airport in Narita, Japan on Monday.

Gigi Hadid showed off her long legs in a simple black-and-white look on Wednesday afternoon in NYC.

Natalie Portman was all smiles at the Venice Film Festival on Monday as she headed to her latest film premiere.

Bella Hadid stepped out in a matching two-piece look on Wednesday in New York City.

Joe Jonas and his girlfriend Sophie Turner took a selfie with a fan on Monday night at the US Open.

"Real Housewives of New York" personality Jill Zarin and boyfriend Gary Brody sat together at the US Open on Tuesday night.

Chef Curtis Stone and Vanessa Lachey stopped over at Build Series in New York City ahead of the season 2 premiere of Universal Kids' 'Top Chef Jr.'

Spike Lee and wife Tonya Lewis Lee cheered on Serena Williams at the US Open on Tuesday evening.

Lala Anthony pumped her fists at the US Open on Tuesday night.

Whitney Port stepped out during NYFW in a set by Outdoor Voices to host the launch of Koia's Fruit Infusions on September 12, 2018 in NYC.

Ashlee Simpson and Evan Ross were spotted leaving The Blue Box Cafe at Tiffany & Co. in NYC on Monday.

Aziz Ansari and his girlfriend looked on at the US Open on Monday night as Maria Sharapova and Roger Federer both lost their matches.

More from Aol.com:
Olivia Culpo is jaw-dropping in silver cut-out dress
The legacy of Law Roach - From Zendaya to Celine Dion
GQ Men of the Year 2018: Chrissy Teigen, John Legend, Rita Ora and more on the red carpet