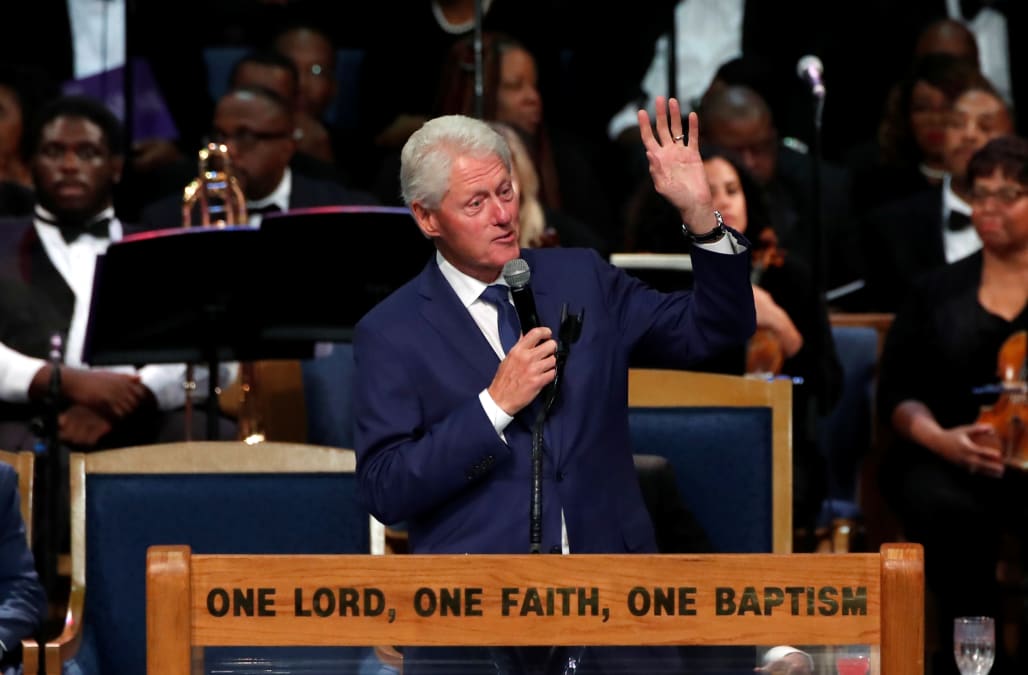 Former President Bill Clinton elicited laughter, applause and a few uncertain expressions as he recalled his decadeslong friendship with Aretha Franklin at her funeral celebration in Detroit on Friday.

“We started out not as a president, a first lady, senator, secretary of state,” Clinton said, referencing his wife, the former Secretary of State Hillary Clinton, sitting nearby.

“We started out as, like, Aretha Franklin groupies or something.”

The 18-time Grammy Award winner and the first woman inducted into the Rock & Roll Hall of Fame died of pancreatic cancer Aug. 16 at age 76.

The Clintons and Franklin go way back. (Tellingly, their arrival at Detroit’s Greater Grace Temple brought a standing ovation.) Franklin appeared and performed at a number of events during the Clinton years ― a time when the White House was occupied by a pair of superfans.

RELATED: Aretha Franklin through the years

Franklin was central to the 42nd president’s first inaugural celebrations in January 1993. Franklin helped kick off events surrounding the swearing-in ceremony, performing in an outdoor concert on the National Mall along with Michael Jackson, Diana Ross, Bob Dylan and others. Later, she performed a rendition of “I Dreamed a Dream” from “Les Miserables” at the televised Presidential Gala, swathed in one of her signature furs that she cast aside as the song crescendoed.

The following year, in 1994, she returned to Washington for “In Performance at the White House,” a show in the Rose Garden where the singer “rocked so hard that she lost a shoe crossing the stage” as she flaunted some of her greatest hits, The Washington Post noted.

Asked for her thoughts on Clinton, Franklin told the Post: “Well, they said he was a bubba, didn’t they?” And then: “I think he’s very down to earth, very decent. That’s the impression I get.”

The singer returned to perform at Clinton’s second inauguration in January 1997, where she sang with James Taylor. (That summer, she serenaded then-Vice President Al Gore’s daughter Karenna at her wedding.)

In May 1999, Franklin was on hand to deflect some of the awkwardness surrounding that year’s White House Correspondents’ Association dinner; in the fall of that year Clinton granted her a National Medal of the Arts.

In his Friday remarks, Clinton praised not only the singer’s talent but her work ethic and empathy for others. He recalled seeing her onstage at the last performance she ever gave, a benefit for Elton John’s AIDS Foundation where she sang “for 45 great minutes” and also played piano, “just to make sure none of us ever forgot she was real good at that.”

In one particularly Bill Clinton moment, he praised her opulent sense of style.

“I hope God will forgive me. But I was so glad when I got here ― and I hope you will forgive me ― when the casket was still open. Because I wondered what my friend’s got on today,” the former president said, to applause. A quick pan to Franklin’s grandchildren, however, revealed a string of dubious expressions. 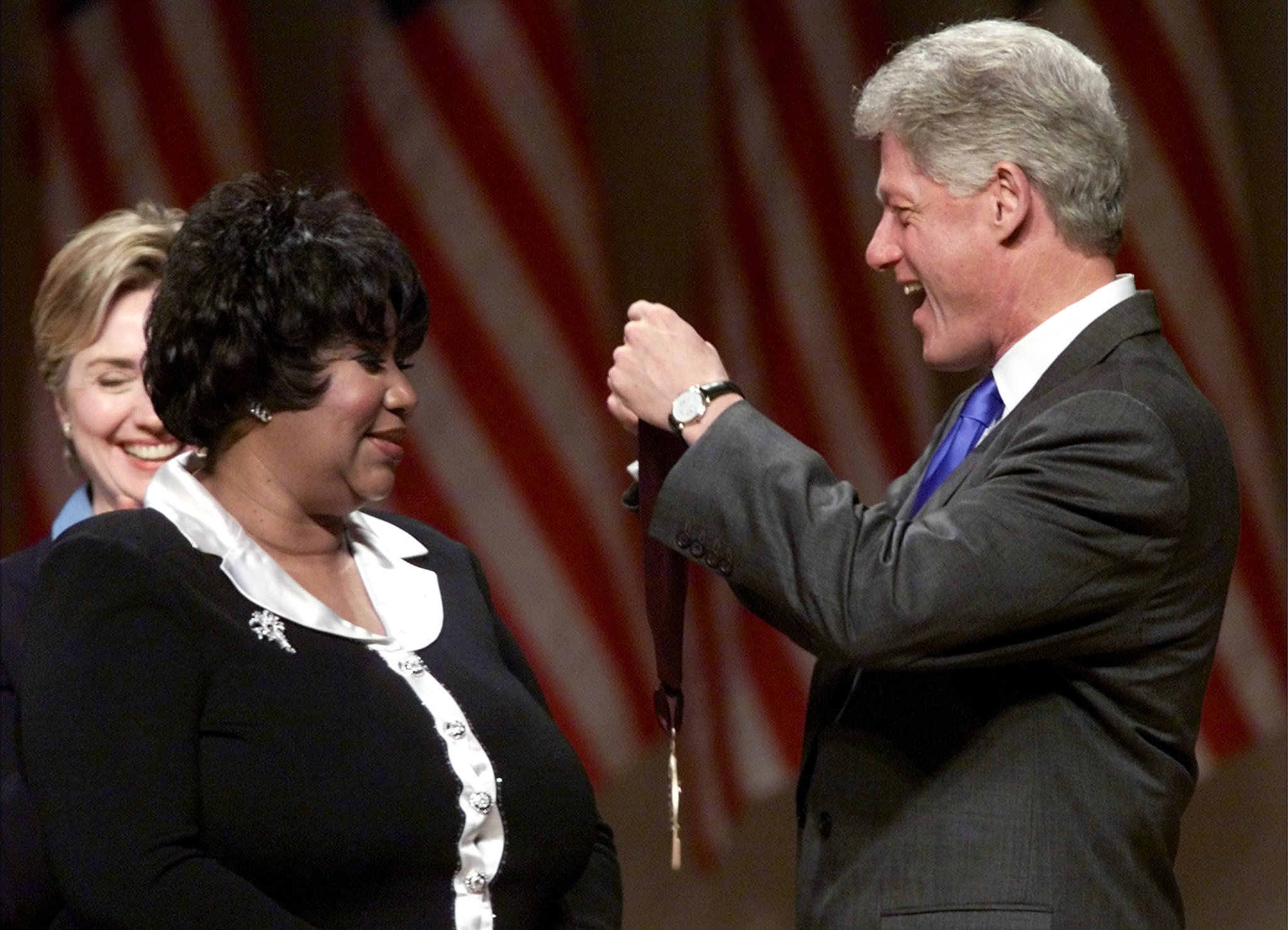 The singer has met and performed before a number of those holding the nation’s highest office, starting with President Jimmy Carter’s inauguration. President George W. Bush honored her in 2005 for her work, and President Barack Obama tapped her to sing at his 2009 inaugural.

While Bush and Obama could not attend Franklin’s funeral, as both were scheduled to eulogize the late Sen. John McCain at the National Cathedral in Washington, both sent letters about her legacy that were read before congregants in Detroit.

Franklin was laid to rest in a gold-plated casket following an extravagant, five-plus-hour “celebration of life” after several days of open-casket public viewings ― during which she underwent multiple costume changes.

Ariana Grande, Faith Hill and Fantasia Barrino ― among many others ― gave gospel-flavored performances in honor of the icon.

Clinton concluded his remarks by reminding the crowd of his age, reminiscing about outdated music formats before waving his black iPhone before the crowd and marveling at its small size.

He then put the gadget up to the mic and pressed play on Franklin’s hit “Think.”