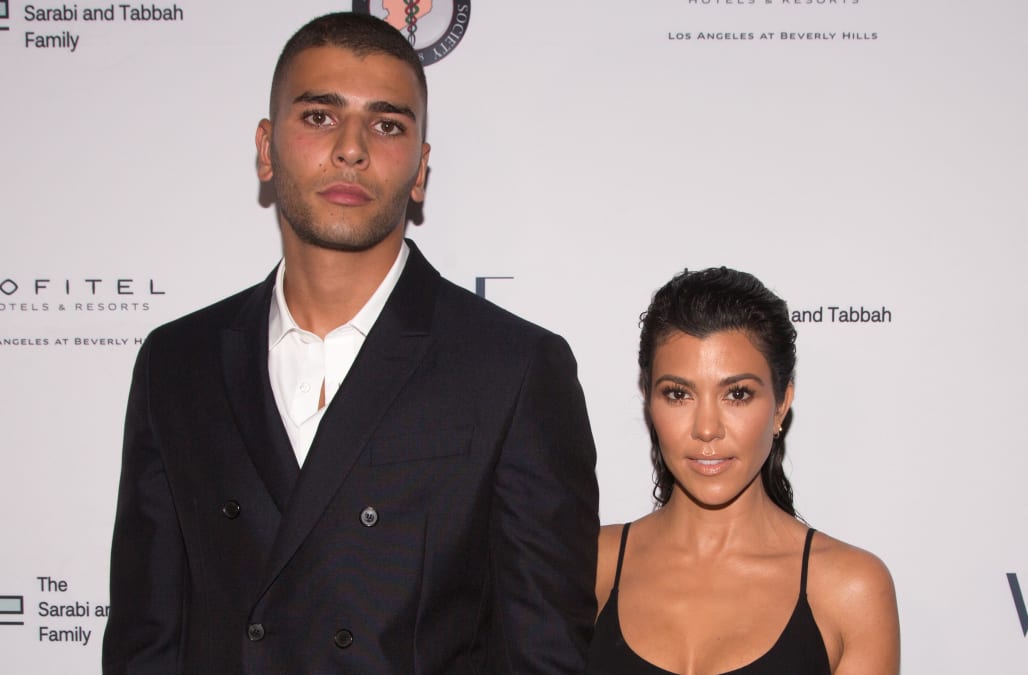 No closure yet. Younes Bendjima is having a hard time moving on from his breakup with Kourtney Kardashian, a source exclusively confirms to Us Weekly.

Two weeks after the 39-year-old reality star pulled the plug on their nearly two-year relationship, the insider tells Us that “Younes is still bitter about their breakup.”

The source adds that “it hasn’t been an easy breakup for him,” and “it doesn’t help that he’s a hot-tempered person.”

Bendjima, 25, took off to Mexico on August 6, following his split with Kardashian. He was spotted getting flirty with Jordan Ozuna, a former Las Vegas waitress — who was previously linked to Justin Bieber and Tyga — at the time, but quickly debunked rumors he had already moved on.

“They really want me to be the bad guy,” he wrote on his Instagram Story the following day. “F–k your Hollywood bulls–t (can’t have fun with your friends no more).”

A source confirmed to Us Weekly on August 7 that the Keeping Up With the Kardashians star was the one who ultimately made the decision to end their relationship. The former couple first met in October 2016 at Paris Fashion Week and started dating shortly after.

Bendjima’s breakup from Kardashian isn’t the only thing he’s made headlines for this month. On Thursday, TMZ released a video of him getting into a fight with an employee outside a West Hollywood restaurant. The physical altercation occurred at 2:15 a.m. on March 24. Drake and Odell Beckham Jr. were also with Bendjima and others at the time, but stayed back and away from the altercation.

Kourtney Kardashian's sexiest Instagrams of 2018
Coparenting
🍴
Behind the scenes from my shoot for @gqmexico and #GQLatinAmerica December/January covers. On newsstands today.
@gqmexico
Muchas gracias @GQMexico for the two December/January Issue covers. @gqmexico #GQLatinAmerica Photographer @mschwartzphoto Fashion Editor @fernandocarrillo Styling @deborahafshani Hair @andrewfitzsimons Makeup @miyakemakeup EIC @urbanohidalgo_gq
@gqmexico
People’s Choice Awards thank you, thank you
can’t wait for tonight
sister date
sometimes you need a day away, pics by kenny
saturday night live
👼🏼
cat in the hat
sometimes i take all the shine
¿hablas español?
wanna 🚲 ?
sweet sunday 🍭
detox
thank you for all of my birthday wishes
Smiles all day shooting the new Fall 2018 @calvinklein underwear & jeans campaign with my sisters. #ad Join Our Family. #MYCALVINS Go see more at www.calvinklein.com/mycalvins photo by @willyvanderperre
phone calls with boo bear
🧚🏼‍♂️
I love @myblanquil weighted blanket. Use my code KK20 for 20% off #ad
i’m real, i promise
don’t be shady, be a lady☀️
yep, more focaccia
just finished my daily basket of focaccia...hbu?
what’s mine is yours
buongiorno
la dolce vita
💙
Hrush cropped Larsa out
photo by mason
✨
ethereal
KOURT X KYLIE collab is now restocked! #currently wearing MA$E on eyes from GREEN Palette mixed with PINK palette and FRENCH KISS on 👄
thank you for all of the love and support on our KOURT X KYLIE collab! ❤️RESTOCK today at 3pm pst 😊
KOURT X KYLIE kyliecosmetics.com
KOURT X KYLIE 😋🤪😬kyliecosmetics.com
@vmagazine #KOURTxKYLIE 4.24
@vmagazine shoot, wearing Matcha eyeshadow and French Kiss velvet lipstick from my @kyliecosmetics #KOURTxKYLIE collection launching 4.24
Wearing my #KOURTxKYLIE @kyliecosmetics collection for my @vmagazine shoot. Go to VMagazine.com to see all the photos and shop my collab with Kylie on April 24 at 3pm on KylieCosmetics.com — Concept, Creative Direction and Hair: @andrewfitzsimons Photography: @gregswalesart Styling: @danixmichelle Makeup: @patrickta Interview: @raf_london
KOURT X KYLIE 4/24 I am so excited to announce my collaboration with @kyliejenner 💋 We have been working on this for a year...3 mini eyeshadow palettes and 3 lips..I am wearing Matcha on my eyes and RAD on my lips. Happy Birthday to me!
#yeezyseason7
Reckless 🌴@FashionNova #ad
you got green on your mind, i can see it in your eyes 🐢
my sibling
Honey Ryder
😎
sporty spice
#mycalvins #ad @calvinklein
pizza party
Goodnight, Kyoto ✨🌙
no smoking
superhero pants 🎟
shake it baby ! #ad The perfect meal replacement from @flattummyco and it only takes me 30 seconds to make! I’m obsessed with the results. PS: They’ve got a 20% off sale happening today!
v ❤️day
Valentine’s Day 🌹
Punta de Mita travel diary : on my app 🌴🌺☀️
mujer feliz
it’s the simple things
fitness week, on my app 🌿
Up Next