David Spade: Heather Locklear is in a 'tough situation' 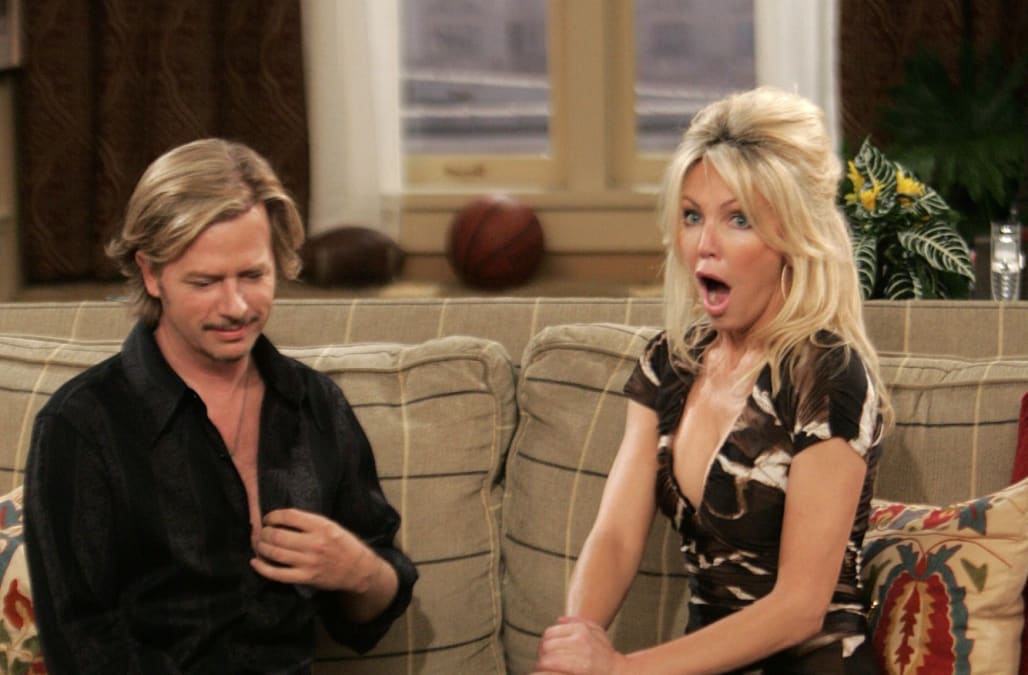 Friendly exes. David Spade revealed that he reached out to Heather Locklearamid her recent trouble with the law.

“Yeah … I mean, I love her,” Spade said during a Wednesday, July 18, appearance on SiriusXM’s Andy Cohen Liveafter Cohen asked if he’s been in touch with ex-girlfriend Locklear. “She was nice to go out with me, and I will always be indebted to her because she was so nice, so fun. And no apologies. Went out with me, didn’t care, even though I’m sure she took some grief … I grew up loving her.”

He added: “You don’t want to be condescending … [Locklear] is having a tough situation — whatever, we all do. I mean, I have my down moments like everybody. … Everyone’s literally one inch away from having some trouble sometimes.”

Spade, 53, and Locklear, 56, dated for several months in 2006. She was hospitalized on June 25 for a possible overdose, just hours after she was arrested for two counts of misdemeanor battery on a police officer and emergency personnel. A source told Us Weekly on July 9 that the female EMT who responded to a domestic disturbance call at Locklear’s home hired a lawyer after allegedly suffering injuries inflicted by the Dynasty alum.

A source previously told Us that Locklear is seeking long-term treatment for mental health issues after her arrest. News of the Golden Globe nominee’s rehab stint comes four months after she was arrested in February for allegedly attacking a police officer after a domestic dispute with her boyfriend, Chris Heisser. Locklear was charged with a felony domestic violence and three counts of misdemeanor battery.

Spade also revealed in his interview that the former Melrose Place star got in contact with him after his sister-in-law Kate Spade died by suicide on June 5 at the age of 55.

“She checked in on me with Katie, and all that stuff,” the Rules of Engagement alum told Cohen. “A lot of people did. And it was really nice. … Katie was a sweetheart, too, so Heather I think might have met her in the old days. … I mean, what can you do other than just say hello and check in and say, ‘If you ever want to say hi, or talk, or anything.’ That’s what people did to me with Katie, and there’s something nice about … People are just out there. It’s just sort of a friendly gesture … You just feel like it’s some niceness coming in, good vibes, instead of what’s going, which is obviously very tough.”

14 PHOTOS
David Spade out and about
See Gallery

David Spade out and about
LOS ANGELES, CA - JULY 12: David Spade is seen on July 12, 2018 in Los Angeles, California. (Photo by gotpap/Bauer-Griffin/GC Images)
THE TONIGHT SHOW STARRING JIMMY FALLON -- Episode 0897 -- Pictured: Comedian David Spade during an interview on July 17, 2018 -- (Photo by: Andrew Lipovsky/NBC/NBCU Photo Bank via Getty Images)
WESTWOOD, CA - JUNE 30: David Spade and Harper Spade attend Columbia Pictures And Sony Pictures Animation's World Premiere Of 'Hotel Transylvania 3: Summer Vacation' at Regency Village Theatre on June 30, 2018 in Westwood, California. (Photo by Jon Kopaloff/FilmMagic)
NEW YORK, NY - APRIL 23: Actor David Spade attends 'The Week Of' New York Premiere at AMC Loews Lincoln Square on April 23, 2018 in New York City. (Photo by Gilbert Carrasquillo/FilmMagic)
LOS ANGELES, CA - APRIL 03: David Spade is seen on April 03, 2018 in Los Angeles, California. (Photo by gotpap/Bauer-Griffin/GC Images)
BEVERLY HILLS, CA - MARCH 04: (EXCLUSIVE ACCESS, SPECIAL RATES APPLY) David Spade attends the 2018 Vanity Fair Oscar Party hosted by Radhika Jones at Wallis Annenberg Center for the Performing Arts on March 4, 2018 in Beverly Hills, California. (Photo by Kevin Mazur/VF18/WireImage)
LOS ANGELES, CA - JANUARY 06: David Spade attends the 7th Annual Sean Penn & Friends HAITI RISING Gala benefiting J/P Haitian Relief Organization on January 6, 2018 in Hollywood, California. (Photo by Michael Kovac/Getty Images for for J/P HRO Gala)
THE MAYOR - 'Lockdown' - When a mysterious package is found at City Hall, everyone is ordered to stay inside but tensions rise after Courtney discovers his team hasn't been completely honest with him that culminates in a rap battle between Courtney and Jermaine. Meanwhile, Dina sets out to make Ed Gunt open up about himself during the lockdown which leads to a surprising result on an all-new episode of 'The Mayor,' airing TUESDAY, JAN. 16 (9:30-10:00 p.m. EST) on the ABC Television Network. (Tony Rivetti via Getty Images) YVETTE NICOLE BROWN, DAVID SPADE
THE MAYOR - 'Grey Christmas' - After visiting a homeless shelter on Christmas Eve, Courtney realizes things for the needy could be improved and pledges to make it a joyous Christmas that every family deserves. But when he learns he doesn't have the budget to deliver on his promise, Courtney loses hope and his holiday spirit which leads to a magical 'It's A Wonderful Life' moment that makes him realize he has the gift needed to pull off a Christmas miracle, on an all-new episode of 'The Mayor,' airing as part of Disney|ABC's special '25 Days of Christmas' programming event, TUESDAY, DEC. 12 (9:30-10:00 p.m. EST), on The ABC Television Network. (Ron Tom via Getty Images) DAVID SPADE
DEL MAR, CA - SEPTEMBER 17: David Spade performs during KAABOO Del Mar at Del Mar Fairgrounds on September 17, 2017 in Del Mar, California. (Photo by Tim Mosenfelder/Getty Images)
JIMMY KIMMEL LIVE - 'Jimmy Kimmel Live' airs every weeknight at 11:35 p.m. EST and features a diverse lineup of guests that includes celebrities, athletes, musical acts, comedians and human-interest subjects, along with comedy bits and a house band. The guests for Thursday, September 7 included David Spade, Abbi Jacobson and Ilana Glazer ('Broad City') and musical guest Khalid. (Randy Holmes via Getty Images) DAVID SPADE
LOS ANGELES, CA - OCTOBER 11: Netflix Chief Content Officer Ted Sarandos and David Spade at the after party for a special screening of The Meyerowitz Stories (New And Selected) at Chateau Marmont Theater on October 11, 2017 in Los Angeles, California. (Photo by Jonathan Leibson/Getty Images for Netflix)
THE MAYOR - The Filibuster Courtney makes his first mayoral appearance at his old elementary school and discovers that their music program, which helped changed his life, is in danger of being eliminated. Val educates Courtney about how he needs to work the system in order to provide the school with appropriate funding, and they work together to outsmart Councilman Ed Gunt (David Spade). Meanwhile, Jermaine proudly embraces his new role as communications director, as Dina pushes T.K. to realize the significance of his job as director of Constituent Services, on The Mayor, TUESDAY, OCTOBER 10 (9:30-10:00 p.m. EDT). (Tony Rivetti/ABC via Getty Images) DAVID SPADE
THE TONIGHT SHOW STARRING JIMMY FALLON -- Episode 0714 -- Pictured: (l-r) Comedian/Actor David Spade during an interview with host Jimmy Fallon on July 28, 2017 -- (Photo by: Andrew Lipovsky/NBC/NBCU Photo Bank via Getty Images)
Up Next

More from Us Magazine:
Matt Lauer ‘furious’ he may have to pay Annette Roque $50 million in divorce
Paris Hilton may have just called Lindsay Lohan a 'pathological liar'
Ladies of London’s Annabelle Neilson died of a heart attack, family says