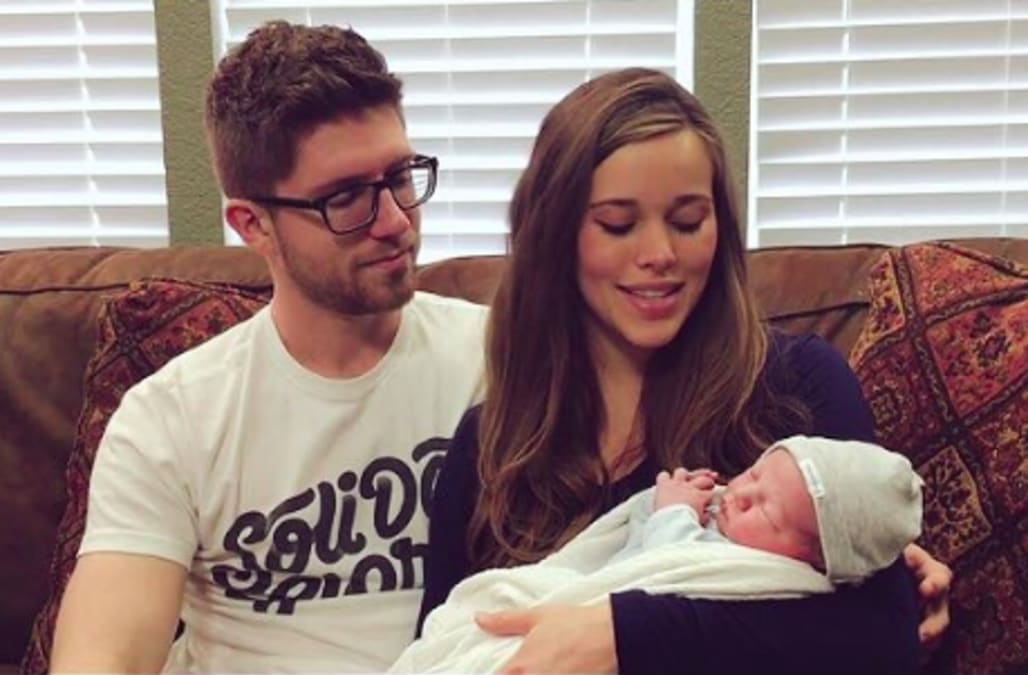 Jessa Duggar had to once again clapback at mommy-shamers after she was called out for allegedly giving her one-year-old son, Henry, soda. Earlier this week, Jessa shared a cute video of her son drinking La Croix sparkling water. However, her caption for the post, which included a line about soda, enraged the easily upsettable mommy police.

“Pretty much the exact same reaction I had to La Croix the first time I tried it,” she wrote, referencing Henry’s sour face after trying the fizzy drink. “Wow…definitely not Fanta.…” The Counting On star’s mentioning of Fanta seemed to be what set the mommy-shamers off.

“Fanta! Is that a joke?” one commented. While another wrote, “I hope that’s just seltzer.”

However, a more direct comment that shamed Jessa for giving her son soda seemed to set Jessa over the edge. “Please tell me you don’t give him Fanta,” the fan wrote. Jessa then directly responded to the commenter, writing, “No, he prefers coffee and energy drinks.” She later added, “And of course I’m joking. He only drinks breastmilk and water.”

That isn’t the first time Jessa has stood up against mommy-shamers. Back in February, the mom-of-two clapped back at two “fans” who tried to tag team her for saying she “trains” her kids.

The war of words went down on Valentine’s Day after Jessa shared a touching tribute to her husband, Ben Seewald. “Best friends forever,” Jessa wrote of her hubby in the sweet caption. “I don’t know another dad who is more involved in the diapers, cuddles, wrestling matches and training moments as you are.”

Jessa Duggar and Ben Seewald
I love my amazing bride! Wonderful day together with my bestie! 😘 @jessaseewald
LINK IN MY BIO!
Happy news from the Seewald family! Baby #3 is on the way! Click the link in my bio to read our predictions! 😍
Cracking up over this one! 😂We were surprised to find out that #BabySeewald was already born last week! Jessa says to tell y'all that she was relieved to find out that all that labor and delivery is already behind her. 😄 Oh, and she said that she really likes the cover picture, commenting "I never imagined I'd have my pre-baby body back so soon!" 😊😜 Haha! We both had a good laugh over this! #UnreliableSources Lol!
Nice fall breeze blowing into NW Arkansas this evening! 😜 Dropped off the kid at Grandma's, and now headed out for a dinner date! 😜 Happy 2nd anniversary, Love! 😍❤️😘
My game day buddies! 🐗 🏈 @jessaseewald #SpurgeonElliotSeewald
💞
Date with my girl 💞 @jessaseewald
We are over the moon. 💞 #BabySeewald3 Ivy Jane Seewald
Check out the full maternity photo album on our website! www.TheSeewaldFamily.com/MaternityPhotos
Lovely date with my Sweetheart! 😘 @jessaseewald
Can't wait for #BabySeewald to arrive! In the meantime, enjoying each day with the Love of my life! God is good! #BlessedBeyondMeasure #happy 😀😀😀
In-N-Out is where we ate lunch today! Awesome food!!! #pregnantwifey #funtimes
About to have our first Bradley class tonight! :-) #pregnantwifey
💞@ben_seewald
7 days till #BabySeewald's due date! 😍 @ben_seewald
Up Next

Unfortunately for Jessa, the focus of her tribute seemed to go to her parenting skills. Fans criticized her for calling some of Ben’s daddy tasks, “training moments.”

“Training is for dogs, not humans,” one user responded. While Jessa has ignored comments like this in the past, the mom-of-two for some reason decided to fight back. “We train for occupations, we train for jobs, we hire personal trainers for our fitness…and we train/teach our kiddos in right behavior in the hopes that they will grow up to be caring, thoughtful and responsible adults,” she wrote. Jessa then sarcastically added, “But I agree – dog are not humans. Thank you for making that distinction.”

The debate then heated up after another fan jumped in, once again calling Jessa out for her “training.” “Those forms of training area) entered into optionally and willingly by the people involved, and b) don’t ever involve physical punishment,” they wrote.

Jessa kept the back-and-forth going as she responded: “Our boys are well loved (and sometimes a bit spoiled) But it is not good parenting to never tell your child no. We should definitely give reasons for why we ask them to do or not do things.”