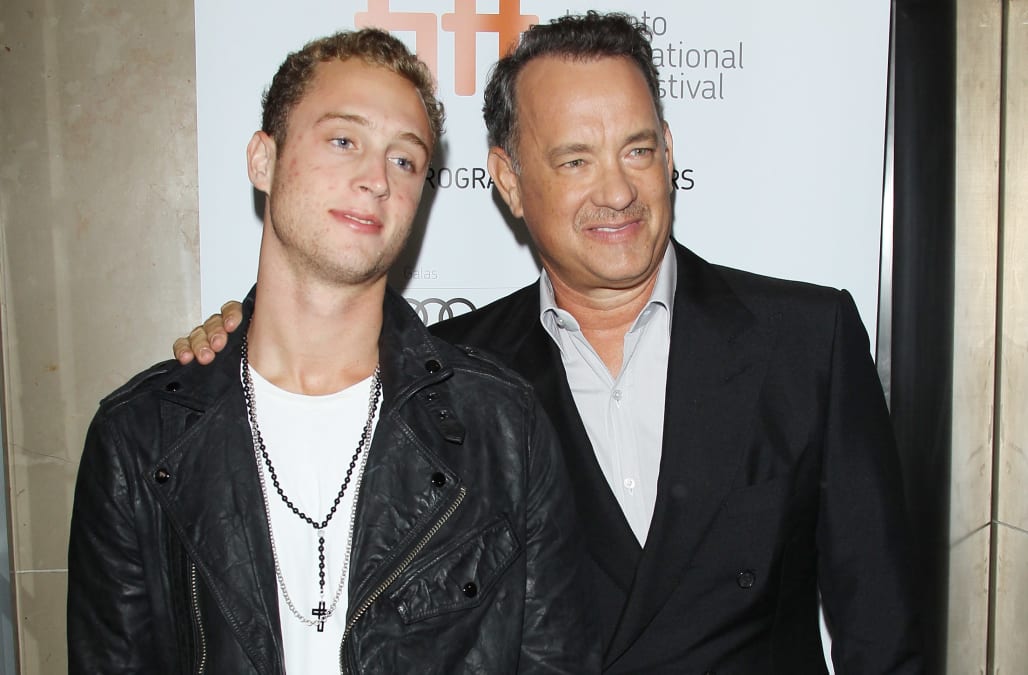 Chet Hanks has had a tumultuous life in the public eye, but after years of struggling with substance abuse and battling his addictions, the musician is clean and sober, and he says it's thanks to him becoming a father.

"It was the prospect of having a kid, and I knew that in nine months there's gonna be a baby here," Hanks told ET's Katie Krause on Tuesday. "That gave me the motivation to be like, 'OK, I've had my time now, and I need to move on."

The 27-year-old performer, who is the eldest son of Tom Hanks and Rita Wilson, admitted that he "had known for a while" that he needed to get sober, but explained how, in the throes of addiction, "You just don't really wanna make the change yet. You don't really want to do the work."

"There's a part of you that knows that you need to make a change but you can't really shut that door on your life and just move on to a new chapter," he reflected. "For me, it took something drastic happening, like becoming a father, for me to make the change."

While sitting down with ET, Hanks was joined by bandmate Drew Arthur. Together, they make up the music duo FTRZ, and they dished on the deeper meaning behind their recently released first single, "Models."

"The opening lyric of the song is, 'From the bottom of the bottle to touching California models,' and it goes on to just talk about how we changed our lives from basically a path of heavy substance abuse -- drugs, alcohol, partying, that kind of whole lifestyle -- to being better men," Hanks explained.

And he says it was his strong desire for bettering his life that first made him realize he wasn't interested in "settling for this mediocre existence," and that he needed to "make a drastic change, completely flip the script, to get what I want out of life."

All through his sobriety journey, Hanks said his famous parents have been by his side, giving him the love and support he needed to succeed.

"They couldn't be more supportive," he shared. "Every step of the way… They've always been there for me and I'm really lucky."

He said they also really "love being grandparents."

"It's awesome seeing them being grandparents as well, because I was really close with my grandparents and now my daughter gets to have the same experience," Hanks shared, adding that they offer to babysit his little girl "all the time."

As for his work with FTRZ, the duo are set to release their first album, The Ocean Park EP, on Aug. 24, and the artists said they also hope that the honesty and message of their music can help other people struggling with the same issues they've faced.

"I feel a responsibility like to tell the truth… and be as open as possible, because there is such a bad drug epidemic going on," Hanks said, "It's a bad problem and I feel like there should be no stigma around people who get sober, because you need to be open to help other people."

"If you just get sober and try to keep it a secret, you're not really helping anybody because there could be somebody that's struggling really hard and if you can be an inspiration to that person to make the change for them to change their life, you can't put a price on that," he added. "

Hanks solemnly admitted that he "could easily be dead or in jail right now" if he hadn't put in the work to change his life, and added "if us, just  sharing our story, can be the spark for somebody else to make that decision in their life, and leave the past behind and open up a new chapter in their life, that is the most rewarding and most fulfilling thing. It's the best part about doing music in the first place."

Hanks also revealed that he would be working with his dad for the first time in the upcoming World War II film Greyhound, slated to hit theaters next year.

More from ET Online:
Bella Hadid crashes a high school prom in a Juicy tracksuit -- See the tics!
Meghan Markle breaks royal posture protocol by crossing her legs at event with Queen Elizabeth
Pregnant Cardi B dances to her own song as Kris Jenner offers to be her midwife