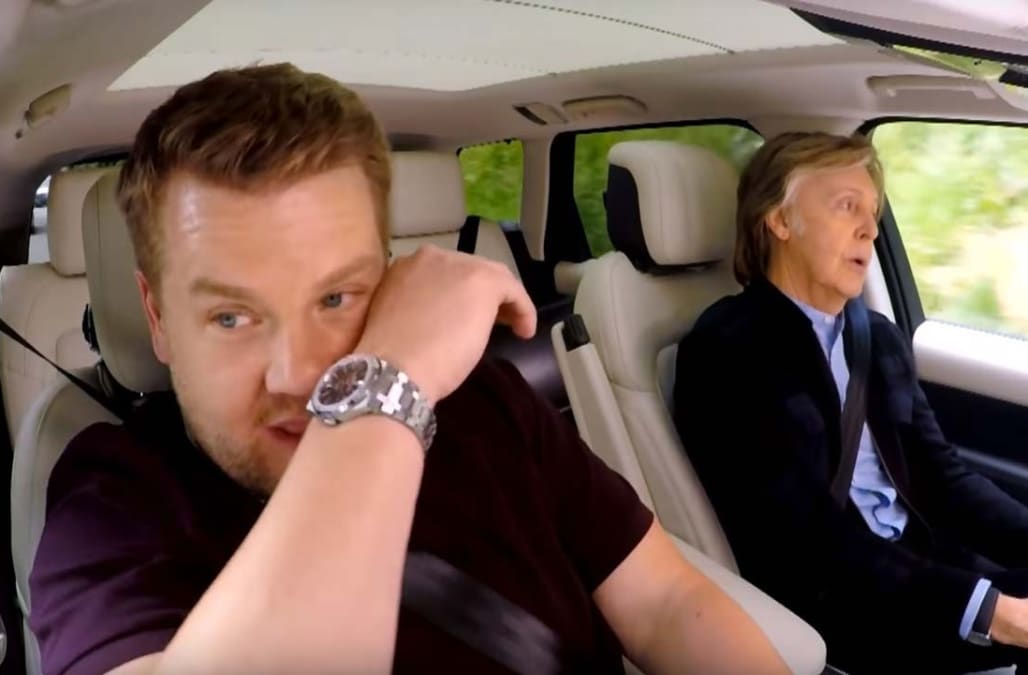 James Corden and The Late Late Show spent the week in London, and to celebrate his time in his home country, the host invited music icon Paul McCartney to join him for an epic new installment of "Carpool Karaoke."

While the pair drove through the streets of McCartney's hometown of Liverpool, they belted out beloved Beatles songs before the segment got unprecedentedly deep and emotional.

"Your music is so full of positivity and joy and a message of love and togetherness," Corden told the celebrated singer. "I feel like it's more relevant now today than it's ever been."

"That’s one of the strangest things, is we expected it to last 10 years, but it keeps going on and on and on," McCartney said of The Beatles' enduring fame and adoration. "And it keeps being relevant."

The singer then went on to share a bit of background on the origins of one of their most uplifting songs, "Let It Be," off the band's final studio album in 1970.

"I had a dream in the '60s where my mom, who died, came to me in the dream and was reassuring me, saying, 'it's gonna be OK. Just let it be.'" McCartney recalled. "She gave me the positive word. So I woke up and I went 'What was that? What'd she say? Let it be? I've never heard that. That's kinda good.'"

"That's the most beautiful story I've ever heard," Corden said before the two broke out in an emotional duet of "Let it Be" that brought tears to talk show host's eyes as he drove.

"Oh man, it got me emotional there," Corden said, wiping his eyes after the song. "I didn't feel it coming."

Explaining why the moment got him so choked up, Corden said, "I can remember my granddad, who was a musician, and my dad, sitting me down and saying, 'We're going to play you the best song you've ever heard. And I remember them playing me that."

"If my granddad were here right now, he'd get an absolute kick out of this," Corden added, with tears still in his eyes.

McCartney made the emotional moment even more poignant when he reassuringly told Corden, "He is."

After the unusually heartfelt moment, the segment continued on in a lighter mood, as the host and the music icon drove around Liverpool visiting all the places that played a significant role in the history of The Beatles.

From Penny Lane to the singer's childhood apartment where Lennon and McCartney wrote some of their most iconic songs, the pair brought viewers on an enlightening and nostalgic journey through the band's iconic history -- bringing excited shock and joy to the random people Corden and McCartney met throughout the excursion.

The joyous "Carpool Karaoke" concluded at a local pub, the Philharmonic Dining Rooms, where The Beatles used to play when they were just starting out.

Setting up hidden cameras around the bar, Corden gave the regular pub-goers a surprise they’d never forget. Posing as a regular bartender, Corden served a drink or two before asking a patron to select a song on the jukebox.

After unsuspectingly picking a Beatles song and returning to her table, the bargoer -- and everyone else in the place -- was shocked when large heavy curtains around the pub's stage suddenly opened revaling McCartney and a full band, who broke out in a performance of "A Hard Day's Night."

The unexpected concert continued as the music legend rocked out with a slew of beloved hits, while many of the patrons were moved to tears by the surprise.

As he wrapped up the performance, McCartney asked Corden to join him on stage for a duet of "Hey Jude," that was the perfect ending to an amazing installment of "Carpool Karaoke."

The Beatles Most Iconic Moments
The Beatles perform in Liverpool's Cavern Club, with Pete Best on drums, 1962. Best was fired from the group that same year, and replaced with Ringo Starr. (Photo by Mark and Colleen Hayward/Getty Images)
1963: Rock and roll band 'The Beatles' pose for a portrait in 1963. (Photo by Michael Ochs Archives/Getty Images)
NEW YORK - FEBRUARY 7: The Beatles arrive at John F. Kennedy International Airport, February 7, 1964. At top is Ringo Starr, middle row is John Lennon and Paul McCartney, lower level is George Harrison and unidentified flight attendant. (Photo by CBS via Getty Images)
NEW YORK - FEBRUARY 9: The Beatles prepare for their first appearance on The Ed Sullivan Show in New York, February 9, 1964. From left to right, Paul McCartney, Ringo Starr (in background, on drums), George Harrison, John Lennon. (Photo by CBS via Getty Images)
UNITED STATES - AUGUST 16: The Beatles at Shea Stadium. Our Mets have displayed their antic behavior before some good crowds at Shea Stadium but last night's turnaway mob of shrieking teeners tested the solidity of the ballpark as they flocked to see Britain's moptop quartet in concert. Scores were injured in the crush or overcome by the humid heat but luckily no one required hospitalization. (Photo by Dan Farrell/NY Daily News Archive via Getty Images)
UNITED KINGDOM - SEPTEMBER 12: PLYMOUTH HOE Photo of MAGICAL MYSTERY TOUR and BEATLES, L-R: John Lennon, Paul McCartney, George Harrison, Ringo Starr - posed, group shot - during Magical Mystery Tour. (Photo by David Redfern/Redferns)
24th June 1967: British pop group The Beatles holding banners proclaiming 'All You Need Is Love' in four languages, in preparation for a global television performance of their song of the same name. (Photo by Doug McKenzie/Getty Images)
UNITED KINGDOM - JANUARY 01: Paul MAC CARTNEY, George HARRISON, Ringo STARR and in front John LENNON interpreting the song I'M THE WALRUS disguised as animals, in a scene from the film MAGICAL MYSTERY TOUR. (Photo by Keystone-France/Gamma-Keystone via Getty Images)
British musican and artist John Lennon (1940 - 1980) holds Japanese-born artist and musician Yoko Ono in his arms, December 1968. (Photo by Susan Wood/Getty Images)
The four members of the British group the BEATLES posing together on August 2, 1967. At that time they stopped their concerts, wore the moustache and announced their separation despite their last album to come, ABBEY ROAD in 1970. (Photo by Keystone-France/Gamma-Keystone via Getty Images)
Photo of BEATLES; George Harrison, Ringo Starr, John lennon & Paul McCartney with actress Jane Asher, Maureen Starkey and Pattie Boyd at a party to celebrate the musician's 25th birthday at Rishikesh, India, 25th February 1968. (Photo by Cummings Archives/Redferns)
Staff Photo by Jill Brady, Wednesday, August 9, 2006: Beatles Abbey Road record album. (Photo by Jill Brady/Portland Press Herald via Getty Images)
Up Next

Paul McCartney Is Every Inch the Family Man During Shopping Trip With His Step-Son -- See the Pic!