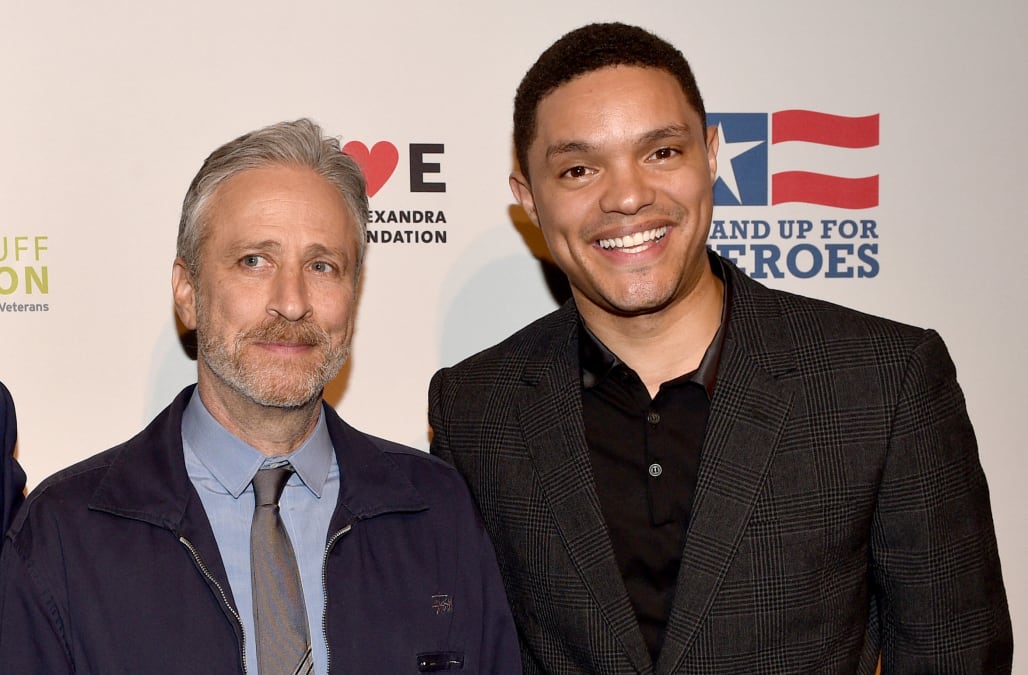 “Daily Show” host Trevor Noah recently opened about about what previous host Jon Stewart told him when it was announced in 2015 he would be leaving after more than 15 years.

“I walked into his office and I said, ’Hey, what’s going on? Are you being pushed out? What’s happening? You need my help, let me know, man. We’ll fight,” Noah recalled at a panel discussion earlier this month.

But Stewart wasn’t being pushed out. He was leaving:

Noah said Stewart urged him to “relish the fact that you can make jokes about these things, because there will come a day when you are too angry to laugh. But don’t rush to get there.”

Stewart has publicly addressed his departure several times, and the toll of the job was apparent.

He told The Guardian in 2015 that he wasn’t getting the same satisfaction.

Jon Stewart Through the Years

Long before he became a household name, Jon Stewart broke onto the scene as an MTV host with his own show. In 1993, the funny guy cut his teeth on "The John Stewart Show," a late-night show with a variety of celebrity guests and a fun opening monologue.  His style was very 90s and a little couture immature. In his early days, Stewart regularly hit the town in hoodies and T-shirts and sported dark, curly locks.
(Photo by Jeff Kravitz/FilmMagic, Inc)

In the 90s, Stewart was also very fond of the leather jacket, T-shirt and jeans look. The dark-haired comedian had a sit down with fellow late-night host Conan O'Brien in 1993 and sans a few gray hairs, the pair look strikingly similar to how they look now.  Photo by: Lesly Weiner/NBCU Photo Bank

Rumors swirled that the young comedian was romancing supermodel Cindy Crawford in the 90s. The pair were spotted all gussied up in 1994 at the MTV Video Music Awards at Radio City Music Hall in New York City. (Photo by Jeff Kravitz/FilmMagic)

In 1995, Stewart met up with singer Jon Bon Jovi. At the time, the New York City native was still sticking to fashion basics like T-shirts. Are you sensing a trend here? (Photo by Ke.Mazur/WireImage)

It's love! Stewart, who wrapped "The Jon Stewart Show" on MTV in 1995, snuggled up to girlfriend Tracy McShane in 1996 at an HBO party. The pair were reportedly set up by a production assistant and clearly couldn't keep their hands off each other during their young romance -- which definitely had staying power. They wed four years after this photo was taken. Perhaps she liked his favorite blue T-shirt as much as  he did. (Photo by Manny Hernandez/Liaison)

Stewart was a rising star in the late 90s -- and as his fame continued to grow, so did his fashion choices. Enter the era of Jon Stewart in more formal attire. (Photo by Ron Galella/WireImage)

In 1999, Stewart attended the  GQ Magazine Of The Year Awards on October 21, 1999, and posed alongside actor Michael J. Fox. During this year, Stewart co-produced several movies like "The Daily View" and "The Daily Show Summer Spectacular."

Look who is getting gussied up now! Stewart looked dapper in a tux at the 1999 Emmy Awards in Los Angeles, despite the fact that it seemed to be a bit big for him. His famous locks were just showing the first signs of a little salt and pepper. (Photo by Frank Micelotta/ImageDirect)

By 1999, Stewart and his now peppered locks, were center stage on Comedy Central's, "The Daily Show." The TV regular replaced Craig Kilborn when he left the show. Naturally, he brought his comedic edge and political prowess to the host seat and a hit was literally born overnight. For his big show, Stewart also stepped up his fashion game and fully traded in his T-shirts for slim-fit suits and well-selected ties.   (Photo by Corey Sipkin/NY Daily News Archive via Getty Images)

Although, he wasn't always suited up. In 2002, the funny guy ditched his clothes in order to host the 44th Annual Grammy Awards.  (Photo by Kevin Winter/Getty Images.

Recognize these two funny faces? Stewart stopped by "Saturday Night Live" in 2002 for a memorable skit with Amy Poehler, where the pair spoofed Mel Gibson. There's no real "fashion moment" here unless you count army greens.

Pretty much everyone fell victim to the political pundit's funny antics -- including Senator Hillary Rodham Clinton, who was all smiles during her 2003 appearance on "The Daily Show." More importantly, Stewart's attire -- dark suit, red tie, crisp white shirt, peppery locks -- became his go-to look for basically the next 10 years. (Photo by Scott Gries/Getty Images for The Daily Show)

Back to basics! In 2008, a low-key Stewart was spotted goofing around with his son Nathan at a New York Knicks game. Stewart channeled his younger self in a classic T-shirt. His son, also seems to be inheriting his style. (Photo by James Devaney/WireImage)

Stewart clearly understands the power of a red tie during a political interview. For his final sit down with President Barack Obama, Stewart rocked his signature look -- dark suit and a red tie. Some fashion habits really do die hard -- but we aren't complaining. (AP Photo/Evan Vucci, File)

“These things are cyclical. You have moments of dissatisfaction, and then you come out of it and it’s OK,” he said. “But the cycles become longer and maybe more entrenched, and that’s when you realize, ‘OK, I’m on the back side of it now.’”

He also spoke about watching networks such as Fox News in search of content for the show.

“Watching these channels all day is incredibly depressing,” Stewart said. “I live in a constant state of depression. I think of us as turd miners. I put on my helmet, I go and mine turds. Hopefully I don’t get turd lung disease.”