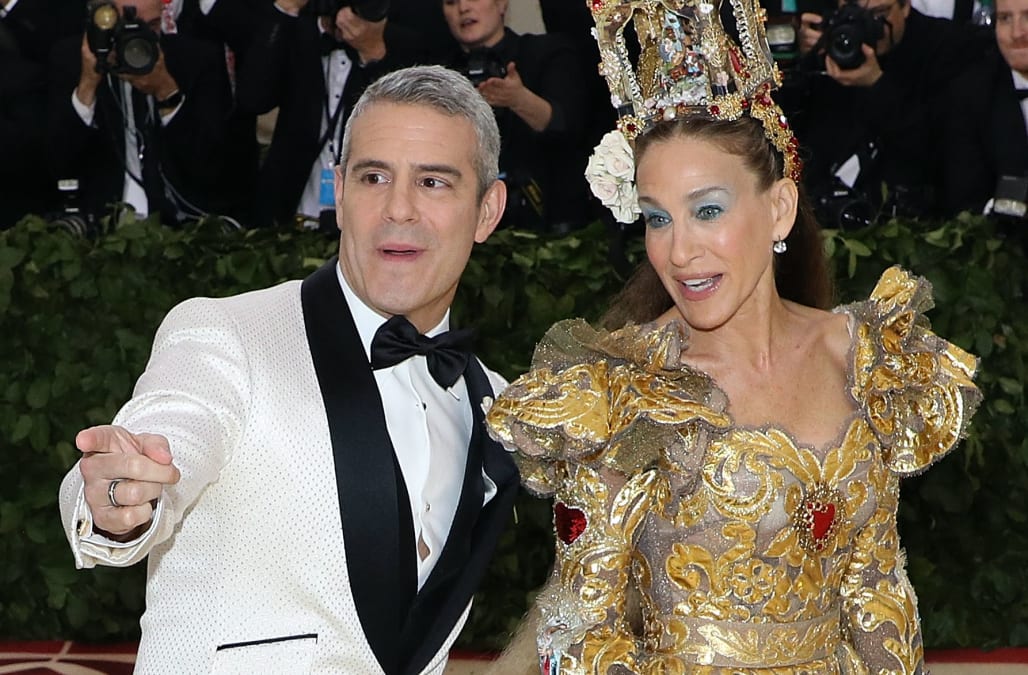 Fashion’s biggest night doesn’t let just anyone in. Thankfully, Andy Cohen was happy to dish the dirt on the 2018 Met Gala on Tuesday’s Watch What Happens Live. His guests, stylist Brad Goreski and supermodel Winnie Harlow, also gave their candid thoughts on the evening’s A-list guests.

When a caller asked who was the drunkest star at the after-party, Cohen, 49, smiled and replied, “He’s another talk show host, and it’s not Jimmy Fallon.”

Cohen got candid about his own Met Gala shenanigans, dishing, “I ate a Cheeba Chew at dinner and I’ll tell you something, I was feeling no pain… After the Met Ball last night, I was busy drunkenly eating hamburgers at a gay bar trying not to get ketchup on my borrowed Dolce & Gabbana.”

He also noted, “George Clooney looked like he was having a lot of fun!”

“That’s the one!” Harlow agreed. “I met him for the first time and he was having the best time of his life. I love it!”

Met Gala 2018: Best celebrity snaps from inside the ball
SJP snapped with Kim Kardashian on her Insta Story.
Salma Hayek blessed us with this Instagram of a selfie alongside Pharell, his wife Helen, Naomi Watts and Ariana Grande
Eva Chen caught this epic moment of Bella Hadid helping out SZA with her headpiece.
Leave it to Kim K to capture this iconic moment of Cardi-B enjoying the night with mom, Kris Jenner.
Janelle Monae, Tessa Thompson, Daniel Kaluuya, Michael B. Jordan, Lena Waithe, John Boyega, Cynthia Erivo, Chadwick Boseman and Letitia Wright. 📸 @kevinmazur
Eva Chen blessed us with this photo of Cole Sprouse and SZA.
Hailey Baldwin claims this group shot is 'the best photo of the evening'. We kind of agree!
Troye Sivan captured fellow singer, Shawn Mendes wearing Frances McDormand's iconic crown from the red carpet.
And another one...Shawn Mendes poses in model Winnie Harlow's crown too!
Winnie Harlow, Zendaya, Laura Harrier and Yara Shahidi pose on the stairs of the Met!
Gigi Hadid sharing this 'iconic' photo of Migos' Offset posing with Donatella Versace.
k, there was no way all eleven of us would all look good in one photo but half of @lizakoshy is missing, we’re all looking at different cameras, and @virgilabloh you look like a bathing maiden in a Grecian myth 🧐. #metgala 2018 x Instagram table: so fun!
Kim K's Insta Story of Kylie and 'J-Rod' is everything and more.
YES!
we’re extra af 🕊🖤
Thank you 2 Chainz for coming and your performance tonight!! 🔥🔥💋❤️ @hairweavekiller Versace After Party! #metgala
❤️❤️❤️
A stunning performance by the Sistine Chapel Choir. With my two beautiful co hosts Rihanna and Amal Clooney. @badgalriri #amalclooney #metgala
🌹
Kings. #MetGala
Up Next

Clooney, 57, attended the event alongside his gorgeous wife, Amal Clooney, who was one of this year’s hosts. Before the party began, the Oscar winner gushed to ET’s Keltie Knight about Amal’s stunning Richard Quinn-designed getup.

“It would look terrible on me,” he quipped to ET. “I was going to wear this earlier, but I’d look like the Jiffy Pop, pop guy… She’s beautiful. I’m always proud of Amal.”

On WWHL, Cohen also gushed about one of the other co-chairs, Rihanna.

“Rihanna was super cool last night. She was in a great mood,” he said of the “Diamonds” singer. “You know what else, she was a great hostess. She took ownership of the night.”

Scarlett Johansson Explains Why She Wore Marchesa to Met Gala