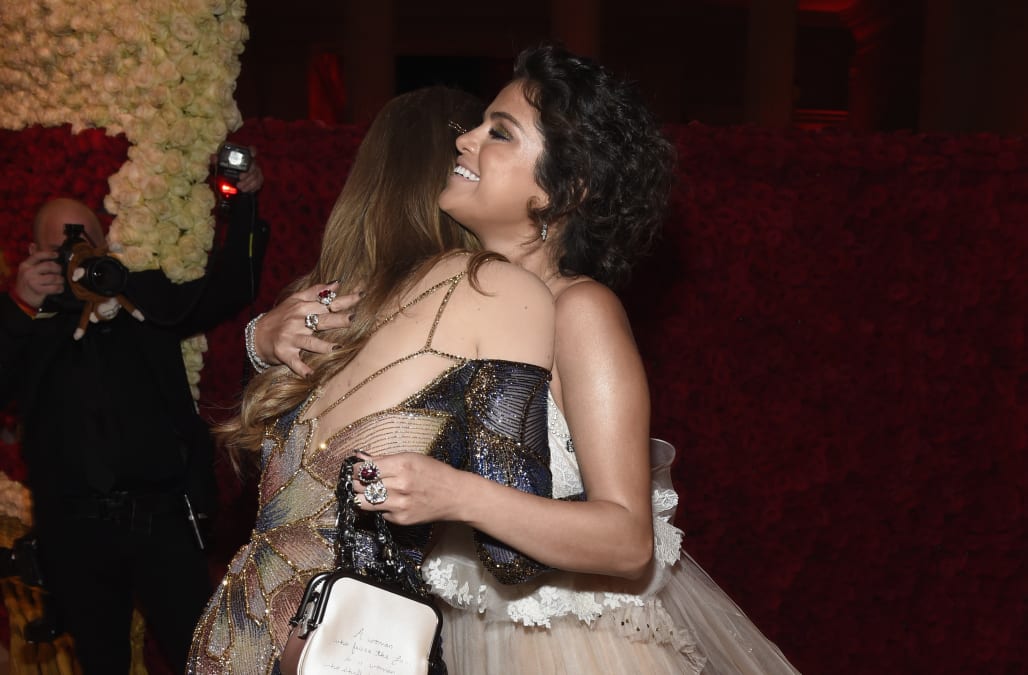 Girls’ night at the Met Gala! Selena Gomez may not have brought a date with her to the 2018 Met Gala, but she still took the time to pose with some star pals at the glamorous affair.

The 25-year-old “Fetish” singer was spotted hugging model and fellow Taylor Swift squad-member Gigi Hadid off the carpet. The pals seemed genuinely happy to catch up as they both attended the high-fashion event solo.

Last year, Gomez attended the event with her then-boyfriend, The Weeknd, who previously dated Gigi’s younger sister, Bella Hadid, with whom he also attended a different Met Gala. Bella also attended the gala, though she was not spotted with Gomez.

Gomez also met up with Kylie Jenner at the event, posing for a shot with the cosmetics queen. The former friends haven’t been photographed together since the 2013 MTV Movie Awards and reportedly had a falling out years ago.

"I'm going to wait to see what they have on," Kris told ET’s Keltie Knight at the event. "That's one of my favorite things to do, stand up at the top of the stairs and watch them walk in."

The Met Gala marked a special milestone for Kylie, who walked her first red carpet with her boyfriend Travis Scott.

Met Gala 2018: Best celebrity snaps from inside the ball
SJP snapped with Kim Kardashian on her Insta Story.
Salma Hayek blessed us with this Instagram of a selfie alongside Pharell, his wife Helen, Naomi Watts and Ariana Grande
Eva Chen caught this epic moment of Bella Hadid helping out SZA with her headpiece.
Leave it to Kim K to capture this iconic moment of Cardi-B enjoying the night with mom, Kris Jenner.
Janelle Monae, Tessa Thompson, Daniel Kaluuya, Michael B. Jordan, Lena Waithe, John Boyega, Cynthia Erivo, Chadwick Boseman and Letitia Wright. 📸 @kevinmazur
Eva Chen blessed us with this photo of Cole Sprouse and SZA.
Hailey Baldwin claims this group shot is 'the best photo of the evening'. We kind of agree!
Troye Sivan captured fellow singer, Shawn Mendes wearing Frances McDormand's iconic crown from the red carpet.
And another one...Shawn Mendes poses in model Winnie Harlow's crown too!
Winnie Harlow, Zendaya, Laura Harrier and Yara Shahidi pose on the stairs of the Met!
Gigi Hadid sharing this 'iconic' photo of Migos' Offset posing with Donatella Versace.
k, there was no way all eleven of us would all look good in one photo but half of @lizakoshy is missing, we’re all looking at different cameras, and @virgilabloh you look like a bathing maiden in a Grecian myth 🧐. #metgala 2018 x Instagram table: so fun!
Kim K's Insta Story of Kylie and 'J-Rod' is everything and more.
YES!
we’re extra af 🕊🖤
Thank you 2 Chainz for coming and your performance tonight!! 🔥🔥💋❤️ @hairweavekiller Versace After Party! #metgala
❤️❤️❤️
A stunning performance by the Sistine Chapel Choir. With my two beautiful co hosts Rihanna and Amal Clooney. @badgalriri #amalclooney #metgala
🌹
Kings. #MetGala
Up Next