Connor Cruise puts DJ career on back burner to … become a fisherman? 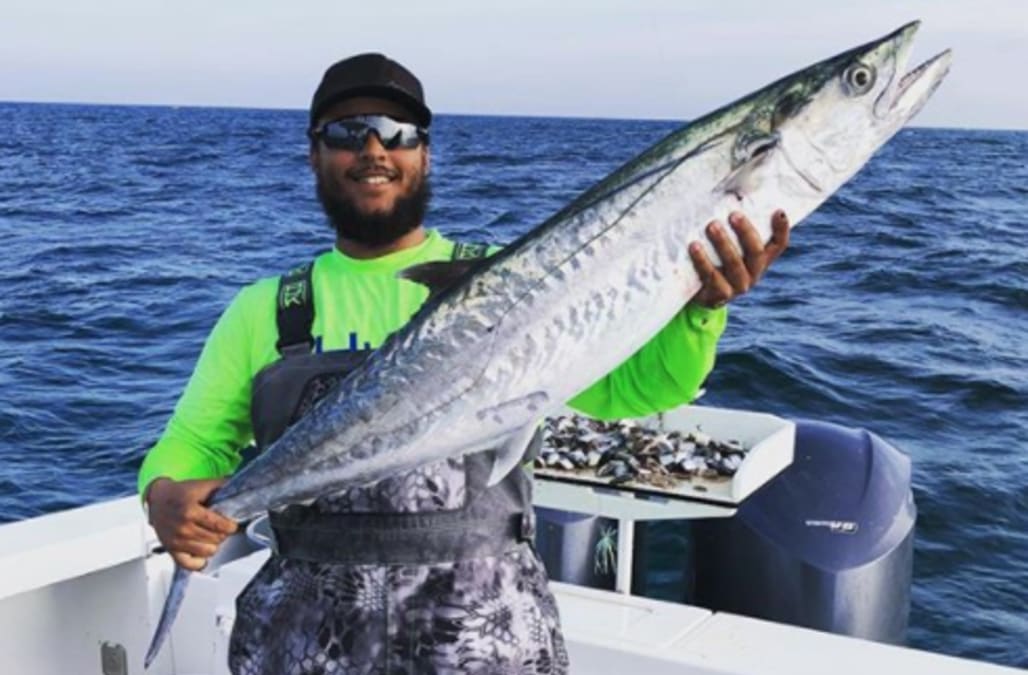 Connor Cruise has a new passion — and it has nothing to do with spinning records.

The 23-year-old son of Tom Cruise and Nicole Kidman was a DJ for years. He was playing big gigs at the age of 16, and his career brought him everywhere from Las Vegas to Australia. He even had a DJ alias, D.J. C-Squared, that he went by for a minute. But he’s put that on the back burner for a new pursuit: fishing.

Now living in Clearwater, Fl. — yes, home to Scientology’s international headquarters — Connor has been spending his days deep-sea fishing, often with the company 2 Shea Charters, and he’s good. Earlier this month, he and his fishing team came in third in the Rotary Club of Clearwater’s Kingfish Tournament.

Connor Cruise on Instagram
Patiently waiting for summer... #Hogzilla #FishColdDiveWarm
Had a great time fishing the Catfish Kicker tournament! Our team took second place 🥈 #redfish @angler360charters #catchandrelease
Duck duck duck duck.... Goose! Came in Third Place overall yesterday for an awesome podium finish at the Clearwater Rotary Kingfish Tournament! Our team did a phenomenal job in some rough conditions! @2sheacharters @nickssaltyadventures @havenraquel @southportboats @raymarinebyflir @tbbco @okumafishingtackle @angler360 #kingfish #gulfofmexico #winning #podium #wingman #yourhighness
Not a morning person... 😂
Tip Up! #nofilter #gulfofmexico #salty #MyHappyPlace
US of A
The real question... Do I order a second OJ 📸 @mrcalhenry #mansbreakfast
Macau I can't wait!!!! See you August 6th at @pachamacau !! @skamartist #skamlife #skamartist
Wildsplash 2016... Decided to take the boat over with @skamartist to meet up with @yogottikom
Throwback time @beezwell #tbt
It's good to be back in Madrid!
#tbt #LoveMyFamily
Chopped... Business As Usual
Up Next

Prize winnings for the tourney were just over $1,000 for the group — considerably less than his DJ paychecks, which were $10,000 for a two-hour set back in 2012 (so probably considerably higher at the end of his run.) We suspect his paycheck for Red Dawn, his first major film, was much larger than even that.

The tabloid Radar Online reports that Cruise’s passion is actually a profession. He works “as a deep-sea fishing deckhand” for 2 Shea Charters. He “guts off a boat deck” and then “works for peanuts filleting finny critters caught by tourists who have no idea he’s the son of Hollywood royalty.”

According to the article, he starts his day at 5 a.m., “heading out with groups that pay $850 for six hours of angling.” A source said, “He loves being out on the water, so this is really a dream job for him.”

A rep for the charter company hasn’t yet responded to Yahoo’s inquiries, but he’s featured on the company’s Instagram page.

He’s also on one of the captains’ pages.

As for that DJ career, a rep for SKAM Artists, which booked gigs for him, tells us, “He hasn’t really dj’ed in a while.” After he missed a gig the night of and gave no notice, they “somewhat have stopped sending him work.” That explains why when you land on his page on the SKAM website, it notes, “There are currently no scheduled events for Connor Cruise.”

Connor also worked with William Morris Endeavor Entertainment and his bio had been deleted from the company’s website. The last photo he posted promoting a gig was in 2016, though a Tampa newspaper reported in September that he was going to DJ a local Halloween party in October.

One look at Connor’s Instagram page makes it clear that he’s enjoying his life on the water. He posts photos of his catches all the time. And he’s called “Captain Connor.”

And some of his fishing buddies have been known to crack a joke about his famous lineage.

You can be my Wingman Anytime! ⚓️. 🚤Happy Birthday Captian @theconnorcruise Another year into the books. So many amazing adventures on and off the water. #clearwaterbeach #spearfishing #fishing #hogzilla #florida #friendshipgoals

Connor’s life isn’t all fish guts. According to Radar Online, he hasn’t given up all his “privileged connections.” He lives in a three-bedroom townhouse. He owns a boat that costs $500,000. He drives a flashy bright yellow Mustang GT. And he also regularly dines on “five-star meals” at Scientology’s “ultra-private hotel, Fort Harrison.”

His father, a Scientology bigwig, recently bought a new home in Clearwater after selling off much of his L.A. real estate. Connor, who ended a relationship last year with a surfer and fisherwoman named Phylicia Bugna, reportedly has limited contact with his mother, Kidman, since she divorced Tom and left Scientology all those years ago. (Though he’s always said nice things about her.)

As for Connor’s siblings, he seems to stay close to his sister, Bella, who was also adopted by Tom and Nicole. She recently launched a T-shirt line, and — in a surprise move — incorporated Kidman’s name into the business. (Bella has also reportedly had little contact with Kidman, who married Keith Urban and lives in Nashville with their two daughters.) Meanwhile, his younger half-sister Suri — from Tom’s marriage to Katie Holmes — turned 12 on Wednesday. But Tom hasn’t been spotted with Suri in years, so we imagine for Connor it’s been even longer.