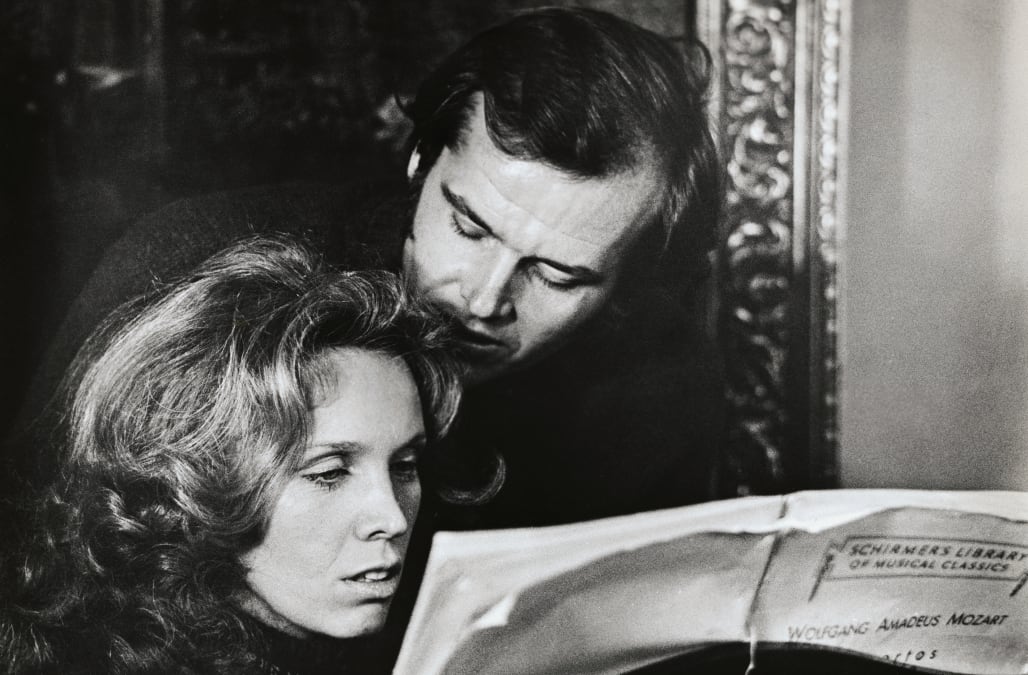 Susan Anspach, known for her starring roles in 1970s films like "Five Easy Pieces" and in the off-Broadway production of "Hair," has died at 75.

Anspach's son, Caleb Goddard, attributed the cause of death to coronary failure.

In a lengthy obituary, the New York Times calls Anspach "radiant and rebellious," a brave actress who took on counterculture roles. She made waves opposite Jack Nicholson in "Five Easy Pieces," in which she played a young intellectual who sleeps with her fiance's brother, and she appeared twice on Broadway while simultaneously building her film and TV career.

See photos of Susan Anspach through the years:

Anspach was mother to Catherine, whose father was Anspach's "Hair" castmate Steve Curry, and Caleb, who she has publicly said is Nicholson's son. Nicholson has never publicly confirmed whether or not he is Caleb's father and has dueled with Anspach in court for financial reasons.

A vocal opponent of marriage, Anspach did wed twice -- first to actor Mark Goddard, who adopted her kids, and then to Sherwood Ball, whom she divorced in 1988. She also has three grandchildren.

Although she continued to act until 2009, she largely stayed out of the spotlight during her later years. Her last role was in family drama "Wild About Harry."

Clare Hollingworth, a veteran war correspondent widely known for breaking the news that WWII had started, died on January 10. She was 105 years old.

Eugene A. Cernan, the last NASA astronaut to walk on the moon, died at the age of 82 on January 16.

Jimmy "Superfly" Snuka, a professional wrestler, died on January 15. He was 73.

John Hurt, known for his role in the Harry Potter series and Elephant Man, died on January 25 at the age of 77. The English actor was diagnosed with pancreatic cancer in 2015.

Legendary actress Mary Tyler Moore died on January 25. She was 80.

Actor Miguel Ferrer, known for his roles in 'NCIS: Los Angeles' and 'Crossing Jordan' died from cancer in January. He was 61.

Brenda Barnes, the former Sara Lee Corp. and Pepsi CEO, died in January from complications of a stroke. She was 63.

Tilikum, the killer whale featured in the documentary 'Blackfish' died in January.

Michael Chamberlain was the father of Australian baby Azaria Chamberlain, who was snatched by a dingo at Uluru in 1980 died in January at the age of 72. The 32-year legal mystery over the baby's death in Australia's outback came to an end in 2012 when a coroner found a dingo was responsible for the killing.

William Peter Blatty, author of 'The Exorcist,' died in January. He was 89 years old.

Judge Joseph Wapner, known for his tenure on the reality TV show "The People's Court," died at the age of 97 on February 28.

Actor Bill Paxton, known for his roles in 'Titanic,' 'Aliens' and 'Twister,' died after experiencing complications from surgery in February. He was 61.

Physicist Mildred Dresselhaus, known as the 'Queen of Carbon' and pioneer of nanoscience, died in February. She was 86.

Legendary professional wrestler George 'The Animal' Steele died in February. He was 79.

Omar Abdel-Rahman, the extremist known as 'the blind sheik' who was convicted in 1993 World Trade Center bombing died in a North Carolina prison in February. He was 78.

Billionaire philanthropist David Rockefeller died in his sleep on MArch 20 at the age of 101.

Emma Morano, who at 117 was believed to be the world's oldest person and the only one left who had touched three centuries died in April.

Former NFL star Aaron Hernandez reportedly committed suicide in the jail cell where he was serving a life sentence for murder in April. He was 27.

Erin Moran, who is known for her role in TV sitcom "Happy Days," died in April at the age of 56 after a battle with cancer.

American bobsledder Steven Holcomb unexpectedly died on May 6. He was just 37 years old when he was found dead in bed at the Olympic Training Center in Lake Placid. Holcomb had sleeping pills and alcohol in his system when he died.

Jim Bunning, a former professional baseball pitcher and U.S. senator for Kentucky, died on May 26. He was 85.

Gregg Allman, founding member of the Allman Brother Band, died on May 27. He was 69 years old.

Frank Deford, a sports journalist and novelist, died on May 28 at the age of 78. He was known for his longtime tenure at Sports Illustrated.

Former Auschwitz guard Reinhold Hanning, died in May before going to prison after being convicted of being an accessory to murder of at least 170,000 people. He was 95.

Soundgarden frontman Chris Cornell committed suicide in his Detroit hotel room in May. He was 52 years old.

Otto Warmbier, a University of Virginia student who was imprisoned in North Korea for 17 months, died less than a week after being returned home in coma in June. He was 22.

Author of the Paddington Bear books, Michael Bond, died at his home from a short illness in June. He was 91.

NFL player James Hardy's body was pulled from an Indiana river in June. The coroner later ruled his death a suicide, he was 31 years old.

Fashion designer Carla Fendi, who helped transform her parents' small leather workshop into a luxury fashion brand died on June 19 at the age of 79.

Lead singer of rock band Linkin Park Chester Bennington was found dead on July 20 from an apparent suicide. He was 41 years old.

Margaret Bergmann Lambert, the German Jewish high jumper who was thrown out of the 1936 Berlin Olympics by the Nazis because of her heritage died in July. She was 103 year's old.

Critically ill baby Charlie Gard, the infant at the center of legal battle over further treatment died in July. He was 11 months old.

Chinese dissident Liu Xiaobo, who won the Nobel Peace Prize while jailed, died of multiple organ failure in July at the age of 61.

June Foray died on July 26 at the age of 99. The iconic voice actress is known for voicing Rocky and Natash in the Rocky and Bulwinkle Show, as well as Cindy Lou Who in "How the Grinch Stole Christmas."

Bob Wolff, the pioneering television voice of the Washington Senators, died in July at the age of 96.

Pulitzer-Prize winning playwright and Oscar-nominated actor Sam Shepard died on July 27 at the age of 73.

Dick Gregory, comedian and civil rights activist, died on August 19 at the age of 84.

Haruo Nakajima, who dressed in a rubber suit to play the original Godzilla, died from pneumonia in August. He was 88 years old.

Jeannie Rousseau de Clarens, one of the remarkable spies of World War II, died on August 23 in France at the age of 98. https://t.co/uG1zzaFB2J

Swedish journalist Kim Wall died while on board Danish inventor Peter Madsen's submarine for an interview in August. She was 30 years old.

Gay rights pioneer Edith Windsor, whose landmark legal case paved the way for gay marriage died in September. She was 88.

Boxing legend Jake La Motta, who was played by Robert De Niro in the movie 'Raging Bull,' died at the age of 95 on September 19.

Liliane Bettencourt, heiress to the L'Oreal fortune and world's richest woman, died at her home in September. She was 94.

Troy Gentry of the country duo Montgomery Gentry died in a helicopter crash in September. He was 50 years old.

Watertown, Massachusetts resident David Henneberry, the man who found Boston Marathon bombing suspect Dzhokhar Tsarnaev hiding in his boat in his backyard, died in September. He was 70 years old.

Robert ' Red' Miller, the former Denver Broncos coach who led them to their first ever Super Bowl, died in September at the age of 89.

58 people were killed in October when a gunman opened fire on the Route 91 Harvest country music festival in Las Vegas. They ranged in age from 20 to 67.

Tom Petty, the famed and beloved rocker behind hits like 'American Girl' and 'Free Fallin,' died in October following a cardiac arrest. He was 66.

Jalal Talabani, the Kurdish leader who became Iraq's first president after the ouster of Saddam Hussein died in October. He was 83 years old.

Phoenix Suns Hall of Famer Connie Hawkins died in October at the age of 75.

Maltese investigative journalist Daphne Caruana Galizia was killed in October when a powerful bomb blew up her car. She as 53.

Former MLB pitcher Roy Halladay died after his plane crashed in the Gulf of Mexico in November. He was 40 years old.

A man killed 26 people, including an unborn child, when he opened fire at the First Baptist Church of Sutherland Springs in Texas in November.

Charles Manson, the cult leader who sent followers known as the "Manson Family" out to commit gruesome murders, died of natural causes at the age of 83 on November 19.

Renowned Russian baritone Dmitry Hvorostovski died from complications from brain cancer in November. He was 55.

Former NFL wide receiver Terry Glenn was killed in a car crash in Texas on November 20 at the age of 43.

Tennis star Jana Novotna of the Czech Republic, a Wimbledon champion and 16-time grand slam winner, died in November after a long battle with cancer. She was 49.

David Cassidy, 'The Partridge Family' star and '70s heartthrob died November 21 after being placed in a medically induced coma. He was 67 years old.

American gospel singer and actress Della Reese, from the television show 'Touched by an Angel' died at her California home in November at the age of 86.

Russian extreme sport star Valery Rozov died while attempting a massive base jump from a mountain in the Himalayas in November. He was 52.

Anthony Senerchia, the activist who helped inspire the 'Ice Bucket Challenge' phenomenon in 2014, died after a long battle with Lou Gehrig’s disease on November 25. He was 46.

Lowell Hawthorne, the founder of the Golden Krust Caribbean Bakery chain died in December. New York's medical examiner said the 57-year-old shot himself in the head.

John Anderson, a former Republican congressman who ran an independent campaign against Ronald Reagan and Jimmy Carter in the 1980 presidential election, died in December. He was 95.

Erica Garner died of a heart attack. She was the daughter of Eric Garner, who died in July 2014 when police subdued him with a chokehold under suspicion of selling loose cigarettes. She was 27.

Detective novelist Sue Grafton was best known for her "alphabet series," which included titles like "'A' Is For Alibi." She was 77.