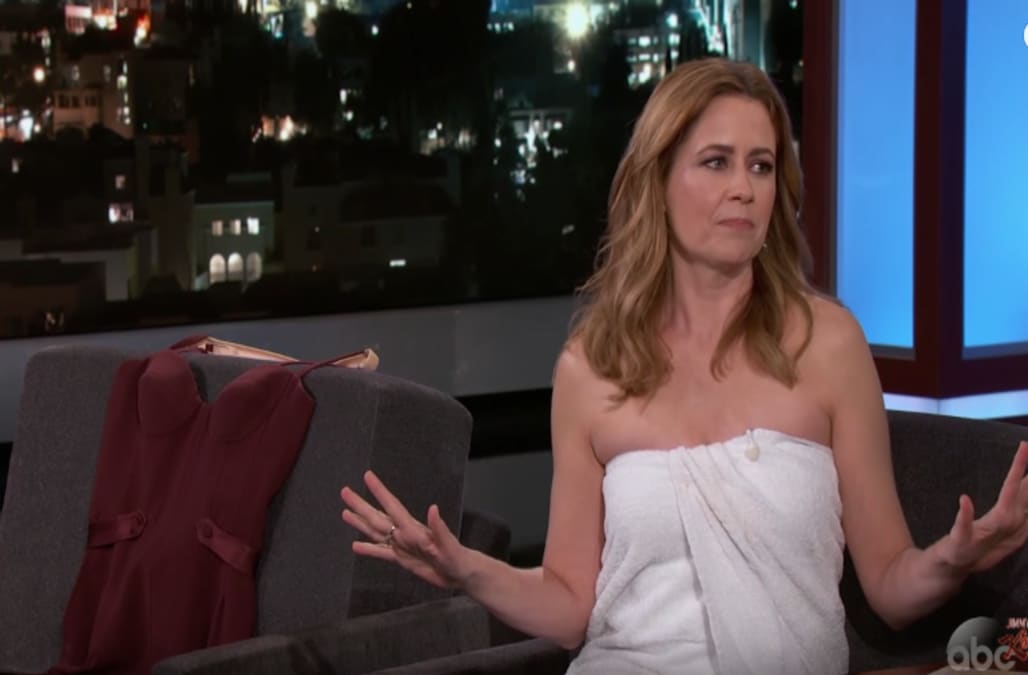 Call it a plot twist.

Actress Jenna Fischer appeared on "Jimmy Kimmel Live!" Monday wearing a white towel and jeans after a zipper on the gown she was planning to wear broke before the show.

"You know, I am a Missouri girl, and the show must go on," Fischer told Kimmel, admitting she "waited too long" to start getting dressed for the interview and "panicked" after the wardrobe malfunction.

The 44-year-old star brought the purple dress she expected to wear on stage with her, showed it to the audience and placed it on the seat beside her.

She joked during the interview that she's "never been more comfortable."

"I am mentally a little freaking out that I'm on a talk show in a towel, but I'm physically very comfortable," she explained to Kimmel.

Fischer, who is known for her performance as Pam Beesly on "The Office," stopped by Kimmel to promote her new ABC sitcom, "Splitting Up Together," which centers on a divorcing couple that continues to live on the same property for the sake of their kids.

The new series, which airs an hour after "Roseanne," premiered Tuesday to nearly 7 million viewers.

Fischer recently revealed she'd be open to reprising her old role on "The Office" should the series ever be reprised, but made it clear she hadn't been approached amid rumors of a revival.

"I think the idea of an Office revival is a great idea," Fischer told The Hollywood Reporter in January. "I would be honored to come back in any way that I am able to."

13 PHOTOS
Jenna Fischer out and about
See Gallery