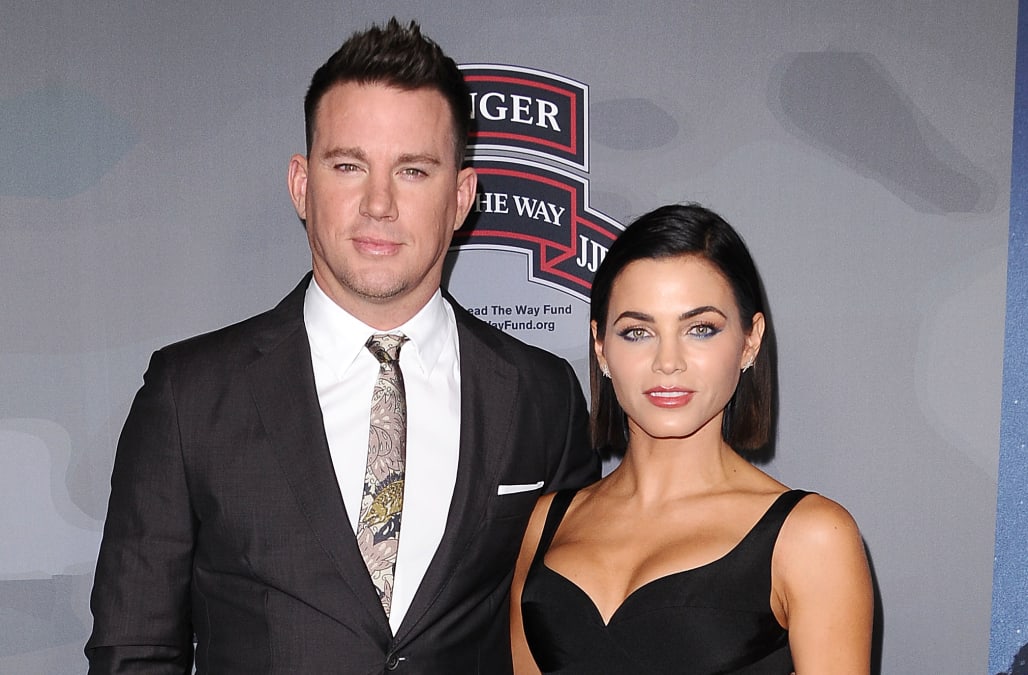 Every celebrity parent handles their child’s exposure to the limelight differently. Many are happy to share their little ones with the world, posting photos of their adorable antics all over social media and taking them on the red carpet. Others vow to never show — or even reveal the name — of their child publicly for as long as they can.

On that wide spectrum, Channing Tatum and Jenna Dewan Tatum fall somewhere in between. Over the weekend, the Step Up pair attended the Kids’ Choice Awards in Inglewood, Calif., where Channing presented and got into a snowball fight (better than slime!) with his Small Foot co-stars, and the couple brought along their daughter, Everly, who will be 5 in May, marking the girl’s first public appearance.

Now Everly didn’t walk the red carpet with her parents — or at all. Instead, she attended the show, which is popular among celebrity kids (even divorced pair Mariah Carey and Nick Cannon reunite to bring Roc and Roe each year), and was snapped walking around inside with mom. She had on a dress that had purple and green dragons that formed a heart, and a necklace. Mom was in a denim jumpsuit. They held hands.

This is a big deal for the Tatum family because they’ve worked really, really, really hard to keep little Evie’s image out of the spotlight. Yes, they released a photo of her when she was a few weeks old, a move Channing said was made “so paparazzi would stop trying to hound us… You know: Here it is, that’s it. Now, let us be.” She was just weeks old at the time.

Since then, with a few exceptions, what they have shared of the little girl, who was born in London out of the Hollywood glare, was typically something with her face obscured, often going to great lengths to avoid having her face in the picture. We’ll point out that, on their social media accounts, there is a series of just the the top of Everly’s head.

And even more of just the back of her head. Another Tatum favorite is the side shot. So fans could see a little bit of that pretty face, but not much more.

Channing Tatum and Jenna Dewan hiding daughter's face on Instagram
Onesies pimp walk
Happy birthday my angel!
A girl and her doggie ❤️🐶 Also- bringing hipstamatic back
There's a fairy in my garden today
But most importantly.....celebrating this little angel turning 4 today....!!!!!! I love you so much little monkey Evie 💕💕💕💕💕💕
Getting through Monday like...
Keeping Grandpops young ;)
So excited for the #HailCaesar premiere tonight! Chan!! Tapping!!!! But first- glam, babes, and Frozen obviously
Tonight's the night!!! Premiere of @supergirlofficial !! This house is very excited
Princess Timberland 👸🏼
Vacation has been amazing feeling so blessed and grateful. 🙏🏻🙏🏻
mom life last night♥️
So @Reebok challenged me to #getpumped and run this hill 10x on a sat morning...buuuut I had a lil helper too.
To say my life completely changed when this little angel was born is an understatement. The love I feel is overwhelming. Thank you Evie for showing me what life is about and choosing me as your mommy♥️♥️ And to all the mamas out there- you are WARRIORS and I bow down to you all. Take some time today to love and spoil yourself :) Happy Mothers Day!!
Happy Halloween from our little lady bug!! She just moves too darn fast to get a good pic
Girl and her goat. RIP Heather. You had a damn good long run sweets.
Feel beautiful on the inside
My little bunny on her way to her Easter party holding her new little bunny 🐰😍😍
Early Easter Eggs
Practicing her magic 🌟
Till next time Vancouver💕
We couldn't love this daddy more! You are all heart and we are so grateful for you every day❤️❤️
❤️🍓❤️🍓❤️🍓❤️🍓❤️
Oh man... Storytime is gonna be epic tonight.
Ohhh how I miss these cuddle naps❤️Becoming a mother is the most amazing journey of my life. The love that I have for this little soul is beyond explanation and humbles me every day😍I love you Evie T!! Happy Mother's Day to all!!
I spy a little elf 😍🎄
I took this just days after jenna and I (mostly jenna) brought our little girl into the world. I've taken many like it over the past 3 years but this is one of my favorites. She was so tired. Haha. But she has such deep strength and other worldly grace. Watching her in those first days transform into a mother was life changing. She was every bit the beautiful, sexy, funny, flawed creature I fell in love with. But the prism turned and showed a whole new light that I had no idea existed, the light of a mothers love. Thank you for that baby. Saw this quote today --" The most important thing a father can do for his children is to love their mother. Theodore Hesburgh" there are a lot of important things in being a father. Who knows what the most important thing is? All I know is that in my case this is pretty high on my list. Love you cake!
Up Next

Hands did the trick for this one.

Everly’s hair has also been a great blocker. She’s under there somewhere.

As we mentioned, on a few rare occasions, they’ve showed her. In addition to her first baby pic, there was this beautiful fairy photo shoot.

Once Jenna shared a family photo taken at Nick Zano’s baby shower. But she shared it as an Instagram story so it was a quick flash … and the photo was one of nine on display.

Channing and Tatum met when they auditioned for the 2006 movie Step Up and married in 2009. As for plans to give Evie a sibling, there are none at the moment. Dewan told Health in January,  “I haven’t yet made my decision, and I’m leaving it to the universe to show me the way. I love the idea of another child, and it might be in the cards, but I’ll know when I know.”

She shared that the idea of two seemed like a lot for them. “A lot of women I know plan it, and that’s their decision,” she added “They want it within three years, but that was not a possibility for us. It felt too overwhelming.” And if they just have one? “I’m so thrilled with one child,” she added. If the desire comes around, it will happen, that’s the way I look at it.”

They’ll have to get even more creative if they have two.