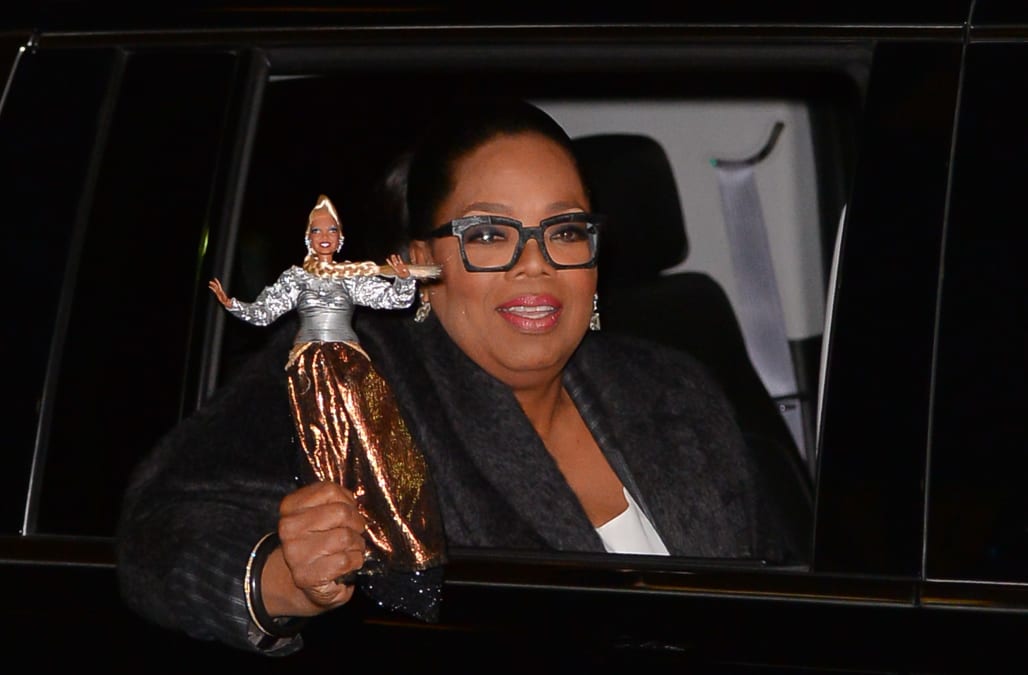 The ladies of "Wrinkle in Time" -- most notably, Reese Witherspoon and Oprah Winfrey -- made the promotional rounds in New York City this week, which made for some stylish (and funny) spottings in Manhattan.

Elsewhere, Khloe Kardashian and Kris Jenner prepared for the arrival of Khloe's baby girl with an extravagant shopping outing in Los Angeles. Josh Duhamel and Oliver Hudson hit the Los Angeles Lakers game together, as did Ciara and Russell Wilson.

More couples that were seen out together? Hugh Jackman and his wife, Deborra-lee Furness, in the West Village, and Joe Jonas and his fiancée Sophia Turner in Paris.

See all of the best celebrity sightings of the week below:

Reese Witherspoon stopped to wave to fans and paparazzi outside of "Good Morning America."

Oprah Winfrey cheekily waved her own "Wrinkle In Time" Barbie out the window to paparazzi while leaving "The Late Show."

Hugh Jackman and wife Deborra-lee Furness were seen running errands together in the West Village.

Jennifer Garner stepped out for some errands in Los Angeles days after going viral during the Oscars.

Nicky Hilton arrived in style at the United Nations in NYC on International Women's Day.

Gigi Hadid donned all-black for an outing in NYC this week.

Nicole Kidman was hardly recognizable on the set of "The Goldfinch" in New York City.

Faith Hill and Tim McGraw were spotted leaving the BBC in London.

Kris Jenner looked adorable in a double-breasted coat after going shopping with daughter and mom-to-be Khloe Kardashian in Los Angeles.

Victoria Beckham walked the walk in all-black for an outing in New York City.

Elizabeth Hurley braved the snowstorm in NYC this week to make the promotional rounds for "The Royals," which returns to E! on Sunday, March 12.

Khloe Kardashian wowed in a monochromatic look during a shopping trip with mom Kris Jenner.

Josh Duhamel and Oliver Hudson (brother to Kate!) had a boys' night at a Lakers game at the Staples Center.

Iced-coffee lover Nick Jonas was spotted grabbing some cold brew in Los Angeles with a friend.

Kelsea Ballerini was seen outside of BBC Radio 2 in London this week looking super chic in an all-black getup that she paired with a fun bomber.

Victoria Beckham was lovely in lavender while arriving at her store on Dover Street in London.

Oprah Winfrey hammed it up for paparazzi while making the promotional rounds for "Wrinkle In Time" in New York City.

Reese Witherspoon braved the snowstorm in New York City this week when she stepped out for a "Wrinkle In Time" screening.

Kate Bosworth stepped out holding hands with Michael Polish in NYC this week.

Jonah Hill was spotted lighting up a cigarette as he enjoyed a cold brew in NoHo.

Reality stars Corinne Olympios and Jonathan Cheban were spotted out and about together in Los Angeles.

Bella Hadid was spotted at the UEFA Champions League Round of 16 Second Leg match between Paris Saint-Germain and Real Madrid at Parc des Princes stadium in Paris.

Kate Bosworth was spotted rocking some serious print in NYC this week.

Mindy Kaling was spotted walking into "Good Morning America" this week to promote "Wrinkle in Time."

Ciara and Russell Wilson were transfixed during a Los Angeles Lakers game at the Staples Center.

Oprah Winfrey, looking chic in all-black, waved to fans outside of "The Late Show."

Meghan Trainor rocked a pink faux fur jacket while making the rounds in NYC to promote her new single, "No Excuses."

Jon Hamm was spotted traveling in style this week at LAX.

Bella Hadid stepped out in Paris wearing a black trench and gray sweatsuit.

Chelsea Handler and Issa Rae spoke candidly -- and at times cracked up! -- about career-building and workplace success during a LinkedIn panel discussion in Los Angeles.

Alicia Vikander stunned during a promotional appearance in London.

Liev Schreiber was spotted walking his dog in NoHo.

MCM hosted an event at Vanderpump Dogs in Los Angeles on Thursday to celebrate the MCM x Eddie Kang capsule collection launch! The star-studded party included a pop-up shop, fundraiser and dog adoption in partnership with Vanderpump Dogs.
Up Next