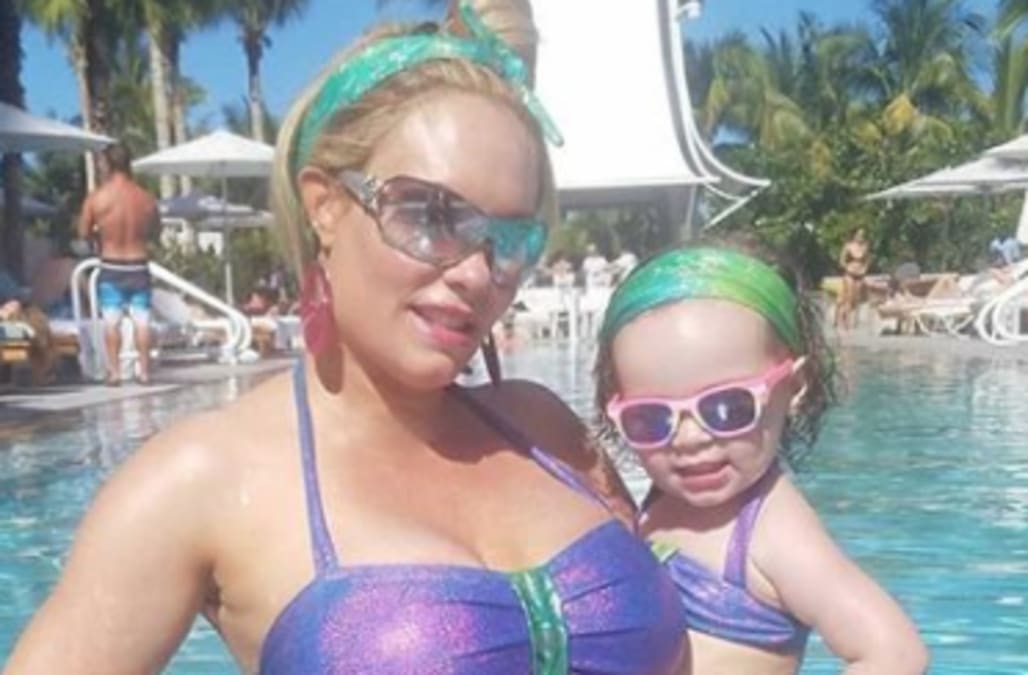 The reality star and her adorable girl, Chanel, love to rock the same bikinis and Monday brought out not one, but two, cute new two-pieces.

“Having the time of our lives down in Bahamas!” Austin captioned a slideshow of the two having their own little poolside party, involving dancing on deck chairs and hitting the pool. “Spent the day at a bungalow at poolside ..Chanel was turnt up! Life of the party.. My friends that came are having a blast too!”

See the photos in the gallery below:

Celebrity winter beach bods 2018
Sultry Sundays with the sexy one are my fave...
Bikini life in paradise 🌴
Morning😘
Striking more poses on our 3rd day in Bahamas! Chanel went rockin our mermaid suits Bathing suits by - @sugardollz
Having the time of our lives down in Bahamas! Spent the day at a bungalow at poolside ..Chanel was turnt up! Life of the party.. My friends that came are having a blast too! Go to my snapchat to see more. Just search Coco to find me Matching swimsuits- @cali_love_shop Chanel- @babychanelnicole (Swipe for more pics)
It’s been almost 14 months since Joshua Jr was born and it has taken me about that long to really get back in shape. The first pic was taken one month after he was born. The second pic was taken almost a full year later and the last pic was taken this weekend. I wish I had a few from in between the first and second so you could really see how slow my progress was but alas...I was busy covering it all up those months, not posing in my unders! Anyway, I have a beach vacation coming up, a new job I start filming in April and my deep desire to feel fit, strong and sexy propelling me forward the last two months to finally loose the last of my baby weight and do a deep dive search for the ab muscles I knew were buried under that belly somewhere! I was wholly and totally inspired by Miss @rachparcell and the before and after pics she shared after taking the #bbg challenge. I had never heard of it but she looked so damn great (she had her baby just a few months before me) that I had to check it out. I found a fantastic app called #sweat that features several different #bbg programs you can choose from and makes it incredibly easy to do anywhere, which for me means in my bedroom at home! I won’t lie, the workouts are real ass kickers but the progress I’ve made in only 5 short weeks has kept me motivated and inspired to keep going! I am so grateful I’ve had a full year to find those ab muscles and get my butt back up where it belongs and wasn’t forced by work to snap back into shape but it is time to make the strength, fitness and overall health of my body a priority and I am so grateful that @rachparcell shared her story and got this mama motivated!
Finally an @inamorataswim RESTOCK of all sold out styles goes live today 10 am EST! Link in bio✨
album soon come
Forgot to post this last night
I got it from my mama👯‍♀️ Introducing @themamagraham in Morocco for my new @swimsuitsforall campaign! Link in bio to shop my new collection.
@inamorataswim
String bikini 👙 at 53💥💕Thank you @swimsuitsforall #theashleygraham
mujer feliz

Vacation Station ☀️
bathroom selfie on set @calvinklein #MyCalvins
Buddy cop movie premise: 2 cops from (enter random city here) must go deep undercover in the Caribbean to bring down (enter random crime syndicate here) 🌴🌊@oliviamunn
guac is extra
Special moments. Myllena fascinated with my growing belly. 🤗 @doutzen @sunneryjames
it’s the simple things
I was all like yes...cool cool cool... then saw that wave coming and ran!! 🤷‍♀️🍎🤷‍♀️
A breath of fresh air. @bookingcom #BookingYeah #ad
Coming for you 2018
Happy New Year. To happiness. Health. Love. And to the simplicity of beautiful unforgettable nature, life. https://t.co/dpdN1eXeeS
@inamorataswim restock!! 🖤 link in bio
Nothing like fresh air and this gorgeous scenery to start off this New Year 🌿✨
SI VIBEZ
On film in paradise by @megatronison
🌈
peaches and the mangos
Mood for the weekend!!
Thankful.... For the blessings, the lessons, the pluses and the minuses. Thankful for the courage, strength, determination and humility... thankful for the removal of toxicity and the addition of positive energy. Most of all thankful for all the love and support. ❤
O F F D U T Y. (Until further notice)
‪Feeling thankful for all the love and support I receive from my fans, family and friends. Happy Thanksgiving all. #gratitude ‬#thanksgiving
tried to show off my bikini...it’s yellow it’s cute ☀️ #decemberincalifornia
Happy Thanksgiving from paradise 🌴@inamorataswim
Bye Hawaii!! 🤙🌴🌊👙🏖☀️🦖👯‍♀️🦕🤙 @mnieman25
heaven 🙌🏼 @westinprinceville
Hold onto yer hats kids #bluebeachpuntacana @bluebeachpuntacana #bluebeachpuntacanaluxuryresort @bluebeachpuntacanaluxuryreso
💙
👙🇲🇦🔥
Thank you for a wonderful Thanksgiving @maderasvillage family! We will be back soon 🏝
💋
📷@tremendy
BO WEST
The things you don’t find in the tourist books. #SplashThrown #hiddenGem #”ThatWasAwesome”
Mahaloaded. #mom
Paradise on Paradise... #Sayless
Running from the bullshit in 2018 💃🏾🌊#losientonolosiento
We are here ❌
Merry Christmas from us🎁🎄
Salam✌🏽
🌊🌊🌊 #tbt
Up Next

The girls then showed off their pretty purple-and-green mermaid outfits, complete with matching headbands and cute pink sunglasses for 2-year-old Chanel.

“Striking more poses on our 3rd day in Bahamas!” Chanel wrote on the post, which also included a pic with husband Ice-T.

The couple gushed about their little girl while talking to ET at the 2018 GRAMMYs, with Austin admitting she loves dressing up the cutie.

28 PHOTOS
Ice-T and Coco out and about
See Gallery

NEWS: Coco Austin Defends Her Braids After Social Media Backlash: 'It's Not a Race War'