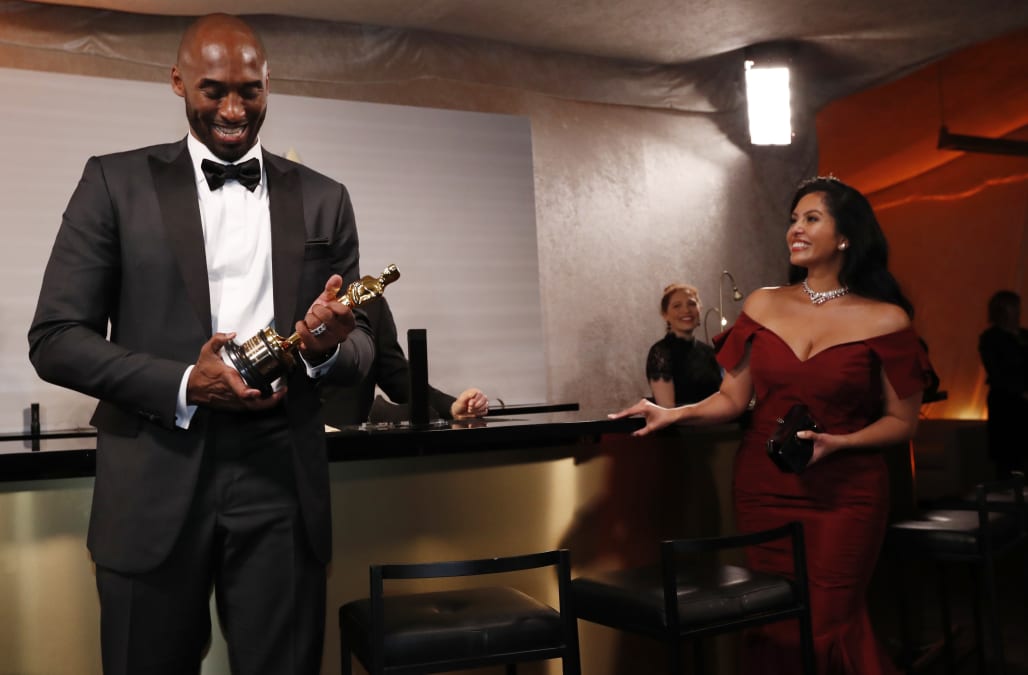 An online petition to take an Oscar award away from Kobe Bryant is gaining momentum on social media.

More than 16,000 people have reportedly signed an online petition to revoke Bryant’s Oscar because the NBA star was accused of sexual assault in 2003.

“The Oscars almost avoided nominating sexual predators for awards,” the petition reads. “Woody Allen and James Franco didn’t get anything. But Kobe Bryant, who was charged with a horrific sexual assault, was nominated.”

The former Los Angeles Laker won an Oscar for Best Animated Short Film at Sunday’s Academy Awards for Dear Basketball. The short film is based off Kobe Bryant’s poignant retirement letter published in the Players Tribune in 2015. The unexpected win shocked Bryant and he thanked his daughters in Italian while also throwing a little political shade saying:

“I don’t know if it’s possible, as basketball players we’re really supposed to shut up and dribble,” Bryant said. “I’m glad we do a little bit more than that. Thank you, Academy, for this amazing honor. Thank you, John Williams for such a wonderful piece of music. Thank you, Verizon for believing in the film. Thank you, Molly Carter. Without you we wouldn’t be here and to my wife Vanessa and to our daughters Natalia, Gianna and Bianka … you are my inspiration.”

Bryant’s comment was directed at Fox News’ Laura Ingraham, who recently told LeBron James to “Shut up and dribble,” in reaction to the Cleveland Cavaliers’ player voicing his political opinions.

The petitioners are hoping that with enough signatures Academy will reconsider Kobe Bryant’s win.

Kobe Bryant settled a lawsuit out of court after a female hotel employee in Colorado accused the NBA player of sexual assault. Bryant denied the encounter at first and then recanted saying that he and the victim had consensual sex. The young woman later dropped the charges and filed a civil lawsuit instead, which was settled.

2018 Oscars: Worst Dressed
Kelly Ripa's multicolored mess was one of the most talked-about outfits on the red carpet -- but not in a good way. But we do love her pinup waves!
Salma Hayek's sparkling lilac gown had a whole lot going on -- sequins, lace, crystals, and tiers! A simpler version of this dress would have been a smarter choice.
St. Vincent's skin-baring ensemble certainly wasn't fit for the Academy Awards, but then again, we're not sure of anywhere else it would belong, either.

Jennifer Lawrence's metallic gown wasn't her worst look ever, but it didn't do her any favors.

We like Emma Stone's silk pantsuit, but it just didn't make sense at the most formal night of the year. Maybe an updo instead of her pin-straight bob would have added some elegance.

Maya Rudolph took a style risk with this one, and while it's hard to go wrong with modesty, we're not sure what drew her to this flamin' red outfit.

She gets points for creativity! But Haley Bennett's textured gown looked a bit too much like a forest floor for the Academy Awards.

Emily Blunt's dress is lovely, and we don't hate it -- but long waves and lighter makeup would have been a better execution of these Queen Elsa vibes.

Whoopi Goldberg is never one to opt for the predictable! Although we love that she always does her own thing, it might be the sunglasses that really take this one over the edge.
Andra Day was swimming in fabric -- is she wearing a comforter?
Gal Gadot always nails it on the red carpet, so we had high expectations for the Oscars. Unfortunately, she was underwhelming in this gunmetal gown.
Elisabeth Moss' pink dress was a bit too predictable. Go bold, Elisabeth! Try something new!
'The View' host Sara Haines is lovely, but her tea-length asymmetrical number just didn't say 'Oscars.'
Up Next

LeBron James and Shaquille O’Neal saluted Bryant when he won his Oscar saying:

Shaquille O’Nealalso added his voice to the conversation, also acknowledging his longtime teammate (and rival) on Twitter: “Congrats to KOBE first Oscar that’s big bro #dearbasketball. Proud of you, Big honor for you and your family. I’m jealous lol,” he joked.

But it’s left to be seen if the athletes will speak out against the petition against their peer.

More from The Grio:
‘BYE FELICIA’: Robin Roberts throws light shade at Omarosa on GMA
Fox News host: Church is the best place to get shot
Anika Noni Rose holds Cicely Tyson down during moment of nerves at Emmys