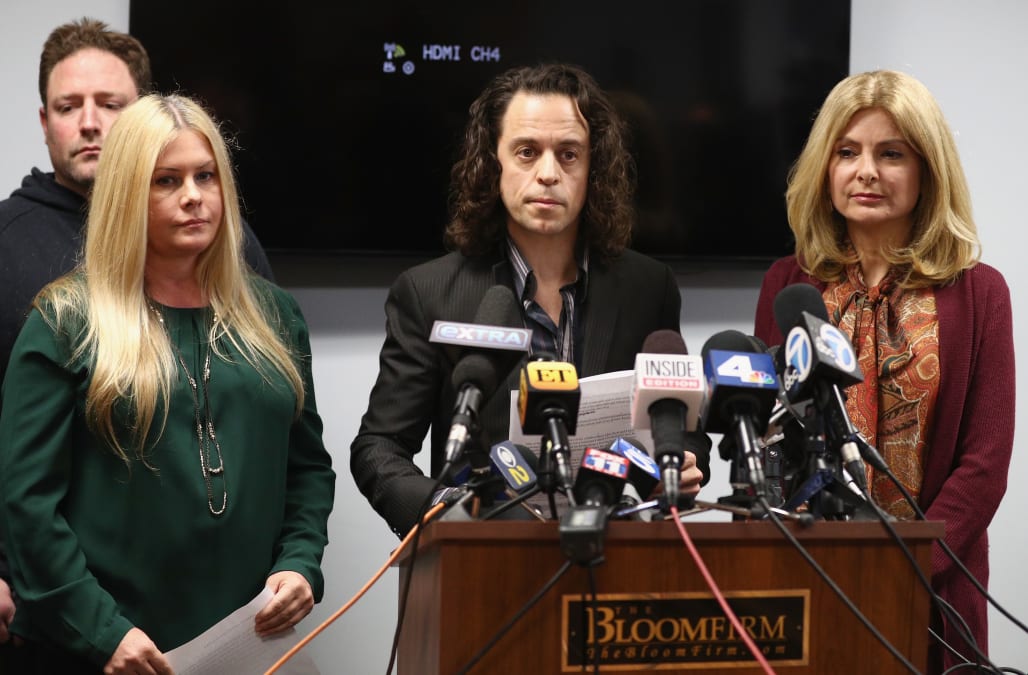 Alexander Polinsky, the second former Charles in Charge star to levy claims against Scott Baio, is alleging child abuse and sexual harassment at the hands of the star of the 1980s family sitcom.

"I was sexually harassed by Scott Baio and ultimately assaulted by him between the ages of 12 to 15 years old," said Polinsky, who spoke out for the first time on Wednesday about his allegations against Baio during a press conference with Hollywood attorney Lisa Bloom.

The pair were joined by Nicole Eggert, Polinsky's Charles in Charge co-star who has accused Baio of sexually abusing her as a minor and who was now on-hand to support Polinsky's claims. Polinsky traced the alleged abuse from Baio back to the child actor's first year working on the show when, at age 11, he walked in on Baio acting "sexual in nature" with 14-year-old Eggert, who was sitting on the adult star's lap.

"I was so naive, I innocently hopped on his lap expecting to hear a story about Fonzie or Happy Days," said Polinsky of the TV show's mega-star. "Scott was a hero to me. Instead of telling us a story, he threw me off him angrily calling me a faggot while Nicole laughed."

7 PHOTOS
Alexander Polinsky out and about
See Gallery

Polinsky went on to detail "a pattern of abuse that was unrelenting" during his time on the show, which aired in syndication for four years. He said that observing his co-star behaving in such a way with Eggert, someone so close to his age, ultimately sent him into a depression. He now believes the ensuing harassment from Baio was "mental torture" in retaliation to what he had seen.

According to Polinsky, Baio would describe gay sex acts to Polinsky, share his "sexual conquests with young girls and co-stars" of the show and that homophobic slurs became a "running gag" on set. "Scott pulled down my pants in front of over 100 people," Polinsky said. "Another time, he laughed as he cut a hole in my dressing room and exposed his genitals to me."

One time when the pair were backstage and Polinsky startled Baio, he "assaulted me by throwing a burning hot cup of tea in my face," said Polinsky. Baio later apologized but the alleged abuse continued, behavior that Polinsky called "sexual-themed hazing."

When reading her statement, Eggert said she felt guilty for not standing up for Polinsky at the time, but said she was enduring her own alleged abuse from Baio and was also a child. Polinsky said adults on set were aware of what was happening, but believes they were silent for fear out of losing their jobs.

After vocalizing his support for his former co-star when Eggert and Baio first went public with their sides of the story last month, Polinsky filed a report with the Los Angeles Police sexual assault unit on Feb. 6, both as a witness for Eggert and of his own claims against Baio.

On Wednesday, Eggert and Bloom said that, including Polinsky, at least 10 on-set witnesses spoke to police about Eggert's claims, including one person who witnessed Baio allegedly dragging Eggert around set by her hair. While Eggert and Polinsky are asking for a public apology from Baio, Bloom said any criminal consequences are now under the LAPD's jurisdiction.

"Child abuse takes many forms," said Bloom, who added that the LAPD is now taking reports of all sexual assault incidents regardless of when it happened. "For little boys, child abuse can often mean homophobic slurs. Child abuse hurts, it deforms, it teaches children they are trash. Today is about rejecting all of that and it's about standing up against child abuse."

She also encouraged others to do what Polinsky has done for Eggert: "If you have information that can help someone who is going alone, please reach out. Contact a lawyer, find out your legal rights and consider telling your story, too. It is never too late to speak your truth. If nothing else, your story will be on record if someone else comes forward."

Baio has denied Eggert's claims; he previously said Eggert and Polinsky had "decided to team up against" him and told them both to go to the police if they had legitimate claims.

"This is a lesson to be careful of what you wish for," said Bloom. "Scott did say Nicole should go to the police. Not only did Nicole [do so], Alexander also went to the police."

Polinsky, who played Eggert's on-screen brother on the 1980s syndicated family sitcom, had previously released a statement saying, "Growing up on the show, I received regular verbal attacks, mental abuse and I also suffered a physical assault at the hands of Scott Baio. There is no excuse for this behavior. It is abhorrent. Both Nicole and I were minors. We deserved safe passage to do our jobs and also be kids." He continued, "The cycle of abuse must stop. Even 30 years after the acts, they still matter.'

In that original statement, he had said that after witnessing Baio "acting inappropriately" with Eggert, Baio yelled at him and called him "various homophobic slurs."

Baio is set to hold his own press conference with his lawyer in response later on Wednesday. His spokesperson told TMZ on Tuesday, "Nicole Eggert, Alexander Polinsky and their attorney have brought a media circus to town, complete with false allegations, misleading insinuations, and pure sleaze mongering. If they wish to have a public conversation about their histories and movies, it will present a very different picture of why they are making these allegations."

Eggert and Polinsky, who each referred to Baio as a "tyrant" when describing their time with him on set, said they hadn't shared their complete stories with each other until recently. "There's a lot we kept inside over the years because of pain," said Polinsky.

Still, the pair want an apology from Baio and dismissed questions about his planned news conference. "I don't think that anything I've seen from him seems to make any sense," she said. "I think the truth is hitting him and I think the truth looks obvious when he is confronted with all the accusations."

Polinsky said that Baio called him 10 years ago to apologize for "very basic things he had said," but that he wasn't ready to have that conversation. "He abused me in public in front of hundreds of people, I would like a public apology," Polinsky added.

This media is not available on this platform.