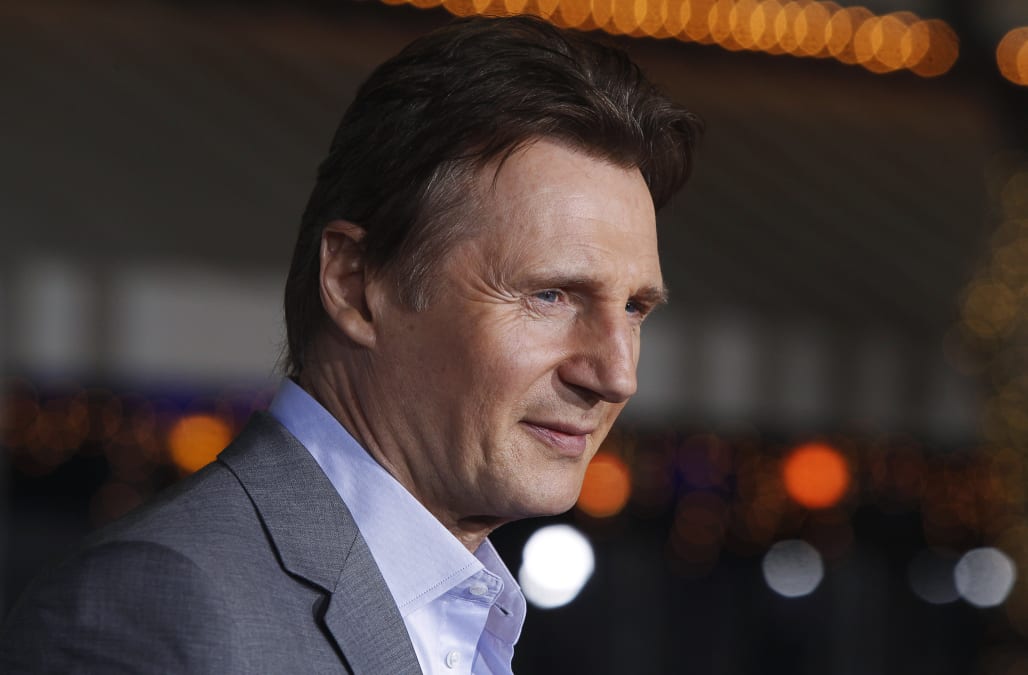 Liam Neeson is under fire for saying there is "a bit of witch hunt happening" in regards to the countless powerful men being accused of sexual harassment and assault.

The "Taken" star appeared on the Irish talk show "The Late Late Show" on Friday where he came to Dustin Hoffman's defense after he was accused of sexual misconduct by several women, calling it "childhood stuff."

"The Dustin Hoffman thing, I'm on the fence about that," Neeson told the show's host Ryan Tubridy.

"Because when you're doing a play and you're with your family, other actors, technicians, you do silly things. You do silly things and it becomes kind of superstitious; if you don't do it every night you think it's going to jinx the show. I think Dustin Hoffman was … I'm not saying I've done similar things like what he did. Apparently, he touched another girl's breast and stuff. But it's childhood stuff what he was doing."

RELATED: Liam Neeson through the years

Liam Neeson through the years
Irish actor Liam Neeson, circa 1987. (Photo by Nancy R. Schiff/Getty Images)
Liam Neeson up against a brick wall with fear in a scene from the film 'Darkman', 1990. (Photo by Universal Pictures/Getty Images)
Actor Liam Neeson on a courtroom scene from the thriller 'Under Suspicion', 1991. (Photo by Keith Hamshere/Getty Images)
Actress Natasha Richardson (L) and actor Liam Neeson arrive at the Tony Awards in New York June 6, 1993. Richardson was nominated for the award for leading actress in "Anna Christie" and Neeson for leading actor in the same play. REUTERS/Peter Morgan(UNITED STATES ENTERTAINMENT OBITUARY)
ARGENTINA - AUGUST 01: ****EXCLUSIVE**** Actor Liam Neeson as O - Schindler in S.Spielberg's film in Argentina on August 01, 1993. (Photo by Rafael WOLLMANN/Gamma-Rapho via Getty Images)
October 1995. (Photo by Thomas & Thomas/ullstein bild via Getty Images)
The director and stars of the new Warner Bros. film "Michael Collins" pose together at the film's premiere October 8 in Beverly Hills. Shown (L-R) are director Neil Jordan, and actors Liam Neeson and Aidan Quinn. The film tells the real life story of Irish patriot Michael Collins, portrayed by Neeson, and his efforts to create a free and peaceful country.
Northern Irish actor Liam Neeson poses for photographs after receiving his Order for the Britsh Empire (OBE) presented to him by Britain's Queen Elizabeth II at Buckingham Palace, in London, October 29, 2002. Neeson has starred in movies such as Star Wars and Schindler's List. REUTERS/John Stillwell MD
Actor Liam Neeson and his wife, actress Natasha Richardson, pose for photographers as they arrive at the 30th annual Los Angeles Film Critics Association Awards dinner in Los Angeles January 13, 2005. Neeson won the association's best actor award for his role in the film "Kinsey" in which he portrayed sex researcher Dr. Alfred Kinsey REUTERS/Fred Prouser FSP
Irish actor Liam Neeson (L) talks to a fan while signing autographs at the red carpet premier of his new film "Breakfast on Pluto" at the Toronto International Film Festival, September 10, 2005. REUTERS/J.P. Moczulski JPM/PN
Actress Natasha Richardson looks at her husband Liam Neeson as they arrive for the Conde Nast Traveler's annual readers choice award show in New York City October 16, 2006. REUTERS/Lucas Jackson (UNITED STATES)
Irish actor Liam Neeson poses for a portrait while promoting the film "Five Minutes of Heaven" at the 2009 Sundance Film Festival in Park City, Utah January 20, 2009. REUTERS/Danny Moloshok (UNITED STATES)
Actor Liam Neeson arrives for a screening of the film "Five Minutes of Heaven" in New York August 11, 2009. REUTERS/Lucas Jackson (UNITED STATES ENTERTAINMENT)
Cast member Liam Neeson signs autographs at the premiere of "The A-Team" at the Mann's Grauman Chinese theatre in Hollywood, California June 3, 2010. The movie opens in the U.S. on June 11. REUTERS/Mario Anzuoni (UNITED STATES - Tags: ENTERTAINMENT)
Cast member Liam Neeson poses on the red carpet before at a German preview of "The A-Team" at a cinema in Berlin July 29, 2010. REUTERS/Fabrizio Bensch (GERMANY - Tags: ENTERTAINMENT)
Cast member Liam Neeson arrives for the premiere of the film "The Next Three Days" in New York November 9, 2010. REUTERS/Lucas Jackson (UNITED STATES - Tags: ENTERTAINMENT HEADSHOT)
Up Next

His comments quickly received attention on social media from users who wrote things like: "Wow, Liam Neeson is canceled."

One user found particular offense with his declaration that the actions were "childhood stuff."

"Oh God, Liam... it's not 'childhood stuff' when they were grown men, it's being lecherous, inappropriate creeps. I really like Liam, but just, no...,"social media user Nicola Brennan wrote.

"Hi here's Liam Neeson saying it's fine to grab a woman's breasts if it's part of a pre-show superstition," another user wrote.

Hoffman was accused by his former co-star on the Broadway performance of “Death of a Salesman” of groping her almost nightly.

Another Twitter user clarified: "Liam Neeson: witch hunt is a term for false accusations against the vulnerable by the powerful, so it's not an accurate description of holding privileged men in power accountable for their actions. A witch hunt never ends. We just want men to stop abusing their power."

The 65-year-old started off the criticized remarks when discussing the deluge of sexual misconduct allegations in Hollywood. He also referenced Garrison Keillor's "inappropriate behavior," which he was fired over in November.

"There is a bit of a witch hunt happening, too," he said. "There's some people, famous people, being suddenly accused of touching some girl's knee or something, and suddenly they're being dropped from their program or something."

Tubridy eventually chimed in to mention the importance of people coming forward and having discussions about these issues, to which Neeson agreed.

"There is a movement happening. It's healthy and it's across every industry. The focus seems to be on Hollywood at the minute. But it's across every industry," he continued. "I'm a UNICEF Goodwill Ambassador, and a very proud one. And I get sent facts and figures and stuff. And if you read the stuff I've read about how female laborers are being treated in farms, ranches and all the rest of it, it's chilling."