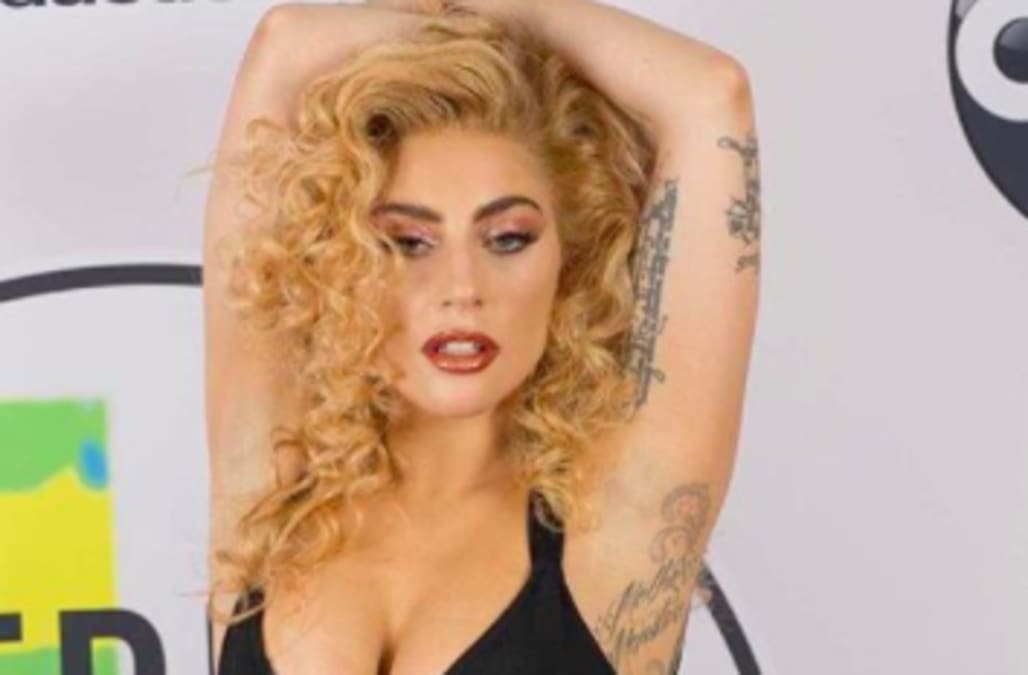 Lady Gaga wasn't actually at the 2017 American Music Awards on Sunday night, but she still managed to have a moment.

The singer performed "The Cute" via satellite from Washington, D.C., during her Joanne World Tour and posed on a mini red carpet backstage before the concert in a sexy LBD that paid tribute to designer Azzedine Alaïa -- it was his design -- one day after his tragic passing.

The stunning look showed Lady Gaga fully embracing her larger-than-life pop persona. With her hair full of dramatic, voluminous blonde curls, the "Million Reasons" hitmaker was a total knockout in the black dress and posed seductively backstage at the Capital One Arena.

The AMAs came one day after news of Alaïa's death rocked the fashion world. Gaga paid tribute to the beloved designer on Instagram with three consecutive posts, one of which featured a lengthy caption honoring the icon.

"I’ll mourn forever the loss of my friend. A true genius in not only fashion but in his heart," she wrote. "He was a king and had the highest standards of design and work ethic. He was so giving, so loving, his heart so full and pure. I️'d watch in awe as he hand made each and every piece, his fingers touching the fabric like poetry. Then he would want to feed us all, and cook with his own hands and talk for hours at the table while his dogs would run around joyfully smelling the delicious food he made us. To say he was special would be an understatement. To say he was integral, important and influential to fashion is simply not enough. There was no one who did what he did. No one knew a woman’s body like him. He should be celebrated as one of the greatest fashion designers the world has ever known. I️ love you, Azzedine."

Stars react to Alaia's death
A sad day. Rest in peace #azzedinealaia ...You were a true master and one of my biggest inspirations 🙏 x VB https://t.co/ZIFMRtHHCH
So sad to wake up to the tragic news that #AzzedineAlaia passed away. Besides being a creative genius, he was one of the sweetest people I have ever met. The way he dressed a woman’s body was such a revelation to me as a young model in Chicago because his designs embraced my curves. One of the very first designer pieces I ever bought myself was one of his famous body suits with a skin tight skirt to match in a gold knit fabric from Ultimo in Chicago. Worn with an Alaia belt cinching in my waist, I felt like a million dollars. What an honor it was to model for him only a few years later in Paris at his atelier. He made all of his models feel beautiful and the fashion world will never forget him. 💔
My beloved friend Azzedine Alaia taught me he'd always wake up excited about what he would learn and who he would meet. In the many years that I knew him, his wonderment of life was contagious and inspiring. My friend wherever you are you will continue your journey with the same unstoppable spirit that touched with magic all of us who had the privilege of meeting you. You will live forever in our hearts. Mi gran amigo Azzedine Alaia. Me enseñó que cada día se levantaba de que iba aprender y a quién iba a conocer. En los años que lo conocí, su admiración por la vida era contagiosa y inspiradora. Amigo mío donde quiera que estés continuarás tu camino con el mismo espíritu imparable que nos tocó con magia a todos los que tuvimos el privilegio de conocerte. Vivirás por siempre en nuestros carazones #Azzedinealaia #fashion #friend #Inspiration
my dear ALAIA.... you will live on forever. rip.
that one time we played in his archives for the Grammys #ALAIA
Hearing of the passing of Azzedine Alaia. A designer who embraced women of color as models and muses when others di… https://t.co/1NLusoUZ6l
Sad about the passing of great fashion designer Azzedine Alaïa. We had fun times together.
A fashion legend and true original. We will miss this creative genius #rip #azzedinealaia https://t.co/Vk2F72pbFq https://t.co/E7BoaEilBf
“It’s important to make women feel confident, because I think they are more important then men.” ...Azzedine Alaia. 🙏🏻💔 This is only one of the many brilliant quotes from one of most brilliant designers of our time. I will always remember him surrounded by beautiful, strong extraordinary women. A true master of fashion that stood out from the rest, Azzedine Alaia will continue to inspire so many artists and designers forever. #welostagreatone #RIP💔 XoRZ
#RIP #azzedinealaia - “It’s import to make women feel confident. I think they are more important than men.” https://t.co/LzbnDSW4OH
Un GRAND maître alliant brillamment la technique, le savoir faire couture , la tradition et la modernité! Toutes le… https://t.co/ss7C3rsOd7
Devastated to hear about the passing of my friend Azzedine Alaïa. Mr. Alaïa was a genius and an incredibly kind man… https://t.co/goxyQgVofZ
GOD Bless this Talented and Beautiful Soul! ♥️🌺♥️🌺♥️ Azzedjne Alaia ♥️🌺♥️🌺🌺♥️! I was so Lucky to know him. Work wit… https://t.co/R3UVmO7fd8
It was such a honor to have spent the day with you, eat the delicious lunch you cooked for us, have you actually fit us for the night. Kim and I said to each other “pinch me, we’re dreaming.” Rest In Peace kind legend, Azzedine Alaia.
Simply the best! No one like you! It was an honor to know you. You will be missed so greatly! Rest In Peace Mr. Ala… https://t.co/KQUlVvyb36
With angels in his eyes, fitting me with one of his beautiful hair pieces.
#alaia
#ALAIA
Up Next