'The Bachelorette': 8 things to expect from 'Men Tell All,' from a racial confrontation to a fiery DeMario! 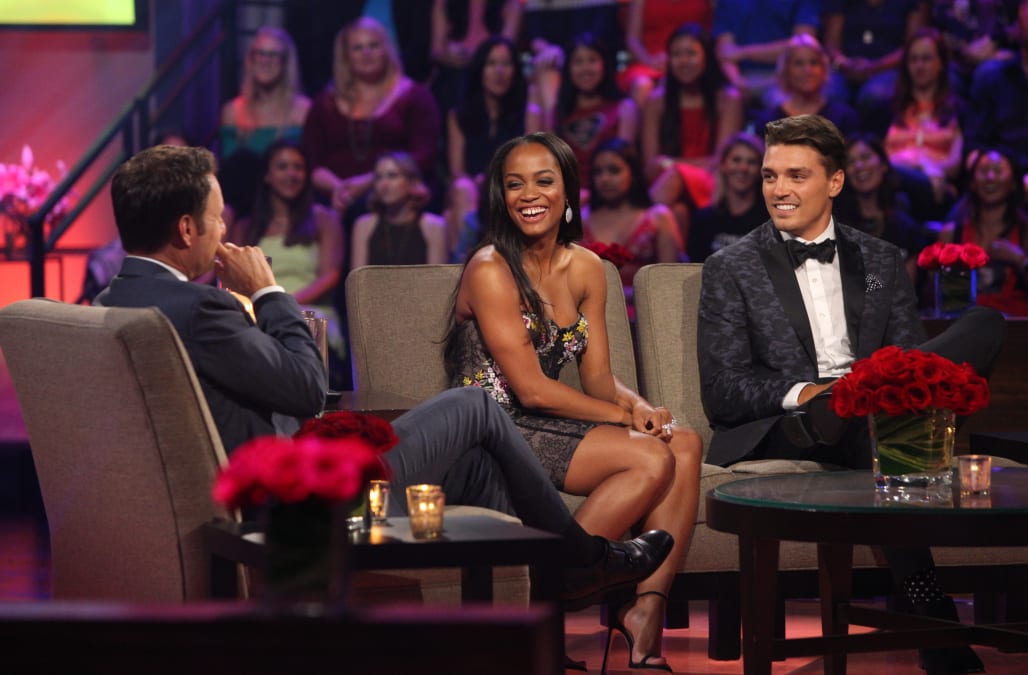 The Men Tell All is finally here!

After a season of unexpected girlfriends, racial tensions, heated confrontations, van allegations and even a few guys probably not there for the right reasons, all will be revealed on this week's episode of The Bachelorette.

WATCH: 'The Bachelorette': Rachel's Family Calls Peter the 'Winner' -- So Why is He in Tears Before Fantasy Suites?

ET got a special look at the Men Tell All taping earlier this month and caught up with Rachel Lindsay and a few of her guys after the show, where they rehashed some of the night's biggest moments. Here's eight things to expect from the upcoming special.

Will, 28: Sales manager from Miami, Florida

(Craig Sjodin/ABC via Getty Images) WILL

Lee Garrett stirred up his fair share of controversy this season, when fans unearthed old tweets with racist and sexist tones. Those tweets -- and Lee's behavior during the show -- will be addressed at length during Men Tell All.

"What I would like to see Lee do is just take responsibility for whatever happened in the past," Kenny King, who went head to head with Lee this season, told ET's Lauren Zima after the Men Tell All taping. "Everybody makes mistakes. Everybody can claim ignorance on a subject or what not, and just take steps towards being a better person."

Host Chris Harrison, who facilitated an in-depth conversation between Lee and the rest of the guys about racism, explained that the full hour Lee spent in the hot seat won't be shown on TV, but much of the meat of the conversation will be aired.

"I didn't know where that conversation was going to go which is why I allowed it to go on so long. Obviously, you're not going to see an hour of that on TV, but we broached the subject," he shared. "I just wasn't sure where it was going to after that, and it went to a really deep, soulful, and I think important, place. And so I really enjoyed the dialogue. I loved the conversation that we were having."

EXCLUSIVE: 'Bachelorette' Rachel Lindsay Reveals Which Suitor She Plans to Confront at 'Men Tell All'

DeMario Jackson was fired up during the taping -- earning praise from a few of his Bachelorette co-stars, but getting a scolding from Chris Harrison.

"DeMario is an amazing guy. He's a very passionate human, so I kind of feel like DeMario was coming out swinging. He had to defend himself. He was somebody who just kind of had to defend his character," Kenny told ET. "All the rose boys love DeMario and that's not because he is one of us, [it's] because he's a good dude. So DeMario, I really felt like he had to come out and defend himself, and he really did a great job."

"DeMario came in with just a lot of built-up energy," added Adam Gottschalk, who noted the dramatic way DeMario was sent home by Rachel. "But I think at the end of things, DeMario brings a very interesting dynamic to the whole house, and he's very opinionated. I think a lot of things that he says [are] very valid too."

Diggy Moreland wasn't the least bit surprised by DeMario's behavior during the taping, revealing that he knew the controversial contestant was "coming with a vengeance."

WATCH: What's Next for 'Bachelor in Paradise' Post-Scandal: Everything We Know

"He had a lot to say and he's been dealing with a lot from the show because of that incident," Diggy said, alluding to the Bachelor in Paradise scandal. "I knew he was gonna come tonight and just let his voice be heard."

"It wouldn't be him if he didn't speak his mind. And that's one thing I learned quickly about DeMario: he vocalizes exactly how he feels and that's what he did tonight," he added.

Harrison, however, couldn't contain his surprise at DeMario's behavior.

"I really thought he would come in and be very contrite, apologetic, maybe even a little quiet. He was anything but," he confessed. "Was that a good decision? No, it was not a good decision, and I don't love revisionist history."

"I don't like when people come back on the show and kind of make up how things went and so I didn't love it, but that's DeMario. It's hard to dislike the guy though. He's such a character. God bless him," Harrison continued. "Just bad choices tonight. He cussed a lot and maybe that's his defense mechanism, I don't know. I didn't see him going that direction. I was very surprised."

EXCLUSIVE: Corinne Olympios and DeMario Jackson Will Sit Down for 'BiP' Interviews: 'All Will Be Explained'

3. Zero Talk of The 'Bachelor in Paradise' Scandal

Though according to Diggy, DeMario's confrontational behavior was a result of the Bachelor in Paradise controversy, there wasn't a mention of the scandal during the Men Tell All taping. The focus of the night was purely on Rachel's guys, and her season of The Bachelorette.

4. The Truth About the Van Allegations

Remember that one time Lee told Rachel that Kenny attempted to drag him out of a van in an effort to save himself from elimination on their heated two-on-one date? We do -- and so does the Bachelorette cast, who addressed Lee's allegations on Men Tell All.

All will be revealed during Monday night's special, as Lee, Kenny and the other guys set the record straight on the van incident, and whether it really ever happened.

WATCH: 'The Bachelorette': Kenny and Lee's Feud Comes to a Head on Two-on-One Date, and Rachel Lindsay Plays Judge!

5. Closure From Rachel, For Some Guys

Rachel kept it 100, offering clarity to the guys she felt needed it, like Adam and Matt Munson, who didn't get much screentime during the season, but who clearly had an affect on the Bachelorette.

"It was their night tonight. Like, I just made a guest appearance, but it was good for them to be able to speak their peace. You know, it's the first time they've seen me, it's the first time that they've been able to talk after watching the season, and that's what I think is so beautiful about tonight," Rachel told ET. "They get a voice."

"It brings a lot of closure to a lot of guys, and it's something where I feel like some people have a lot of built up questions about their relationships," Adam said. "You want to get clarity not only on the other contestants, but also your relationship with Rachel."

"It was good to see everyone. It was good to see Rachel. And it was just cathartic," Dean admitted. "Rachel handled everything tonight with a lot of class and elegance as she typically does. I think she could have been a lot more brash, but I respect and appreciate everything about her."

"The most important thing for me was to let Rachel know that regardless of the Lee/Kenny situation that I was here for Rachel, and I was to let her experience me and I wanted to experience her, and I wanted to see what she had for us. It was real heartfelt," Kenny explained. "I feel everything I said to Rachel I felt, and it was great seeing her. She's beautiful and she always puts a smile on my face."

6. Lessons From Rachel, For the Guys Who Needed It

Rachel didn't bring out smiles in everyone, however, as she made sure to address certain guys during her time on the stage.

"I told you that I felt a certain way about some of the things that I have learned since the season about Lee. And for me, I didn't want to delve into it, I didn't want to give life into it. Like, it's already had enough life, so I just wanted to address it in a very general way and I felt like I did that," Rachel explained of one guy who needed a talking to. "I felt like I said my peace!"

"She was [sassy], but that is the Rachel that we all fell in love with, and that's something that's very special," Adam added. "I'm not surprised by it. She's amazing."

For those who thought we were done with Lucas "Whaboom" Yancey when he was eliminated -- alongside his rival, Blake Elarbee -- on week two of The Bachelorette -- you were wrong.

Yes, Whaboom gets plenty of screentime during Men Tell All, as the men were treated to a little Whaboom surprise after attempting to put him in his place.

"I think Whaboom probably drove everyone a little crazy," Jack Stone told ET after the taping. "I think at this point, we're all a little over Whaboom."

EXCLUSIVE: Rachel Lindsay Says She Doesn't Want Anyone From Her Season to Be the Next Bachelor

8. The Most Dramatic Men Tell All of All Time!

The men definitely brought their A-game this season, promising what might actually end up being the most dramatic Men Tell All in Bachelorette history.

"This Men Tell All was the most lit Men Tell All of all time!" Kenny exclaimed, as Harrison described the taping as "an arduous journey."

"I'm a control freak. It was good to let go tonight," he added.

Harrison also told ET that while Rachel's season provided plenty of good options -- Peter Kraus for Bachelor!!!!!!! -- the next Bachelor has yet to be chosen. Find out why in the video below.

The Bachelorette airs Mondays at 8 p.m. ET/PT on ABC.