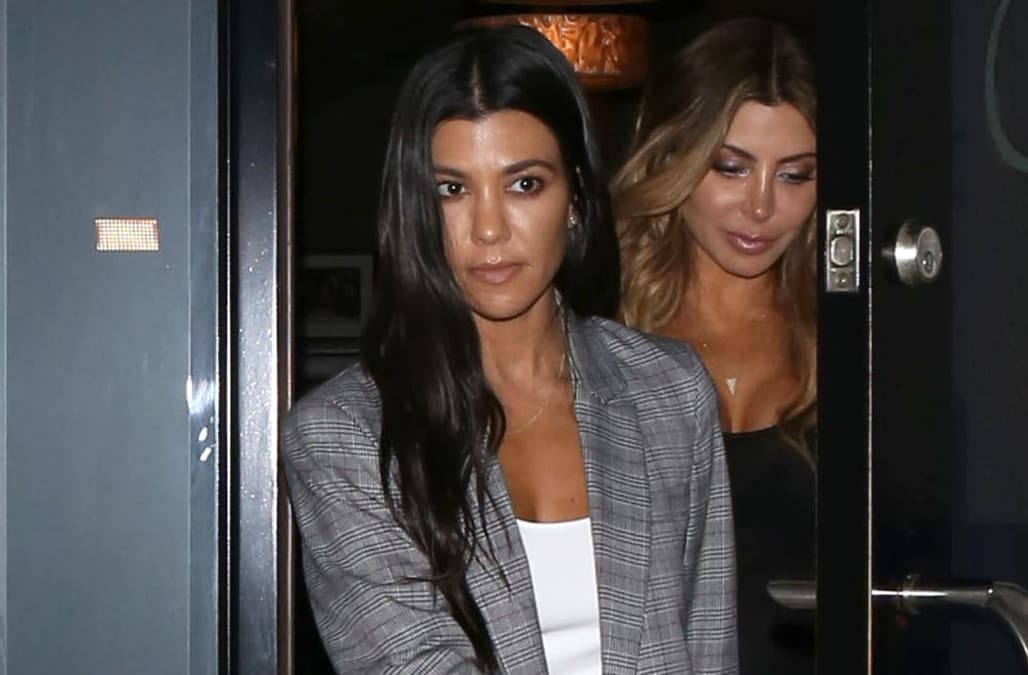 Kourtney Kardashian had a more low-key trip to church than her friend, Justin Bieber.

The mother of three -- who was wearing short denim shorts, a long jacket, a white tank-top and burgundy ankle boots -- was spotted with pal Larsa Pippen at Craig's restaurant in Los Angeles on Wednesday night, after attending The City Church service at Saban Theater.

54 PHOTOS
Kourtney Kardashian out and about
See Gallery

Bieber also attended the service but upon exiting the venue in his vehicle, he hit a 57-year-old male paparazzo. The incident was caught on tape, and Bieber, who can be seen behind the wheel, was driving slowly when he struck the man. The 23-year-old singer subsequently got out of the vehicle, and spoke with the man.

Meanwhile, an eyewitness tells ET that Kardashian left the theater out a side door not long after the incident took place, and headed to her car which was parked just outside the yellow police tape. The eyewitness says the 37-year-old reality star jumped in the driver's seat, but then hopped out to hug an unidentifiable male before driving away. She didn't appear to be questioned by police in regard to Bieber's collision, the source noted.

Kardashian went on with her evening, and Pippen shared a video of her friend driving while jamming to 21 Savage's Issa album.

Bieber and Kardashian have been friends for some time, and have even sparked romance rumors. In January, a source assured ET that the two were "not hooking up."

"They're in the same group of friends and socialize together all the time," the source explained. "They have been friends for years. Justin used to live next door to Kourtney and is still very close friends with the family."

Kourtney Kardashian's 2017 Nantucket vacation
yesterday when we had the beach to ourselves
all week🍦🍔
she's not a local.
forget about it
i don't like you
oh there we are
can't get it together
🇺🇸 vibes
🇺🇸 vibes
🇺🇸 vibes
"I love the silent hour of night, For blissful dreams may then arise, Revealing to my charmed sight What may not bless my waking eyes."
eternal love
unselfish love
fearless love
unconditional love
true love
Up Next