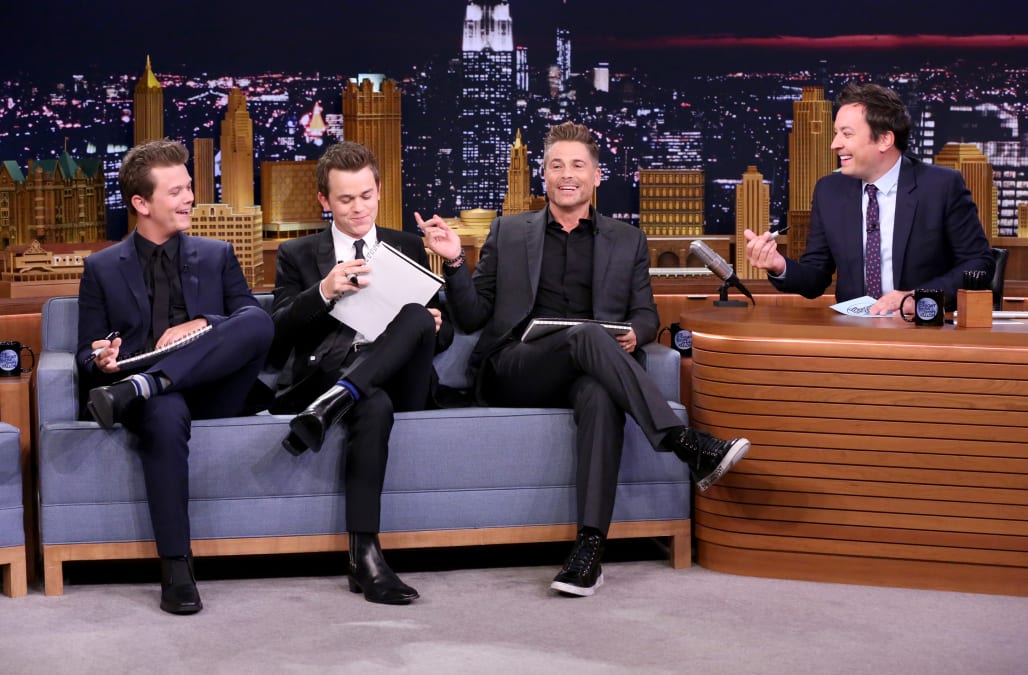 Eternally-handsome Rob Lowe has two sons, and they are -- of course -- just as endearing and attractive as their dad. In other words, our Lowe crush capacity just tripled.

Matthew, 23, and John Owen, 21, faced off against each other on Monday's "Tonight Show," both attempting to prove to that he's Rob's more attentive child. Between the two cuties, it's impossible to choose a favorite: Check out those mirror movements at 0:16 as the boys cross their legs at the exact same time.

The "Best Son Challenge" started off strong as both boys correctly identified Rob's favorite movie -- "Goodfellas," which Rob confirmed by declaring it's the "best movie ever."

"I think we watched that when we were probably a little too young," John Owen told host Jimmy Fallon.

Matthew and John Owen don't just have their father's good looks: They're also funny, poised and comfortable in front of the camera. That last one is important since they co-star with their dad in the upcoming "The Lowe Files," a reality show in which the trio travels the country to investigate unsolved mysteries.

"The Lowe Files" premieres on A&E on August 2.

Rob Lowe on Instagram
Getting ready! Mental Samurai is TONIGHT 9/8 central on @foxtv
Celebrating my #birthday with a #workout and @johnnylowe Whatever your age, be your best! #men #results @profile4men
Comfy.
Me and the boys getting at it last weekend. #karaoke #rock
Golf buddies.
Bonding. #dad #son #ocean
Merry #Christmas from our #family to yours! May your be blessed in the New Year.
Nothing is possible without #family #hollywoodwalkoffame #happy
Home.
At the #Duke game with the birthday boy! Go Matthew. Go Blue Devils. #football
A boy and his (brother's) dog. #Man #BestFriend
The Lowe boys take Hawaii! No fish is safe, no wave is too gnarly. It's on.
Nothing better than having the #boys back home for #summer. Can't believe I got them off the couch for a hike!
#birthday #vegas 21 and done!!
Repping for The Sheriff. #superbowl
Break in the action on set today. #WildBill
Cheers to an awesome holiday! Can't wait to head home to the newest addition to our family - Young Jack! Show me how you brought your dad-game this holiday season for your kids using #DadLife! @CocaCocaLife #Sponsored
New year, same ugly faces 😏 #happynewyears
The Lowe boys in the wilds of Hawaii. #adventure
Up Next