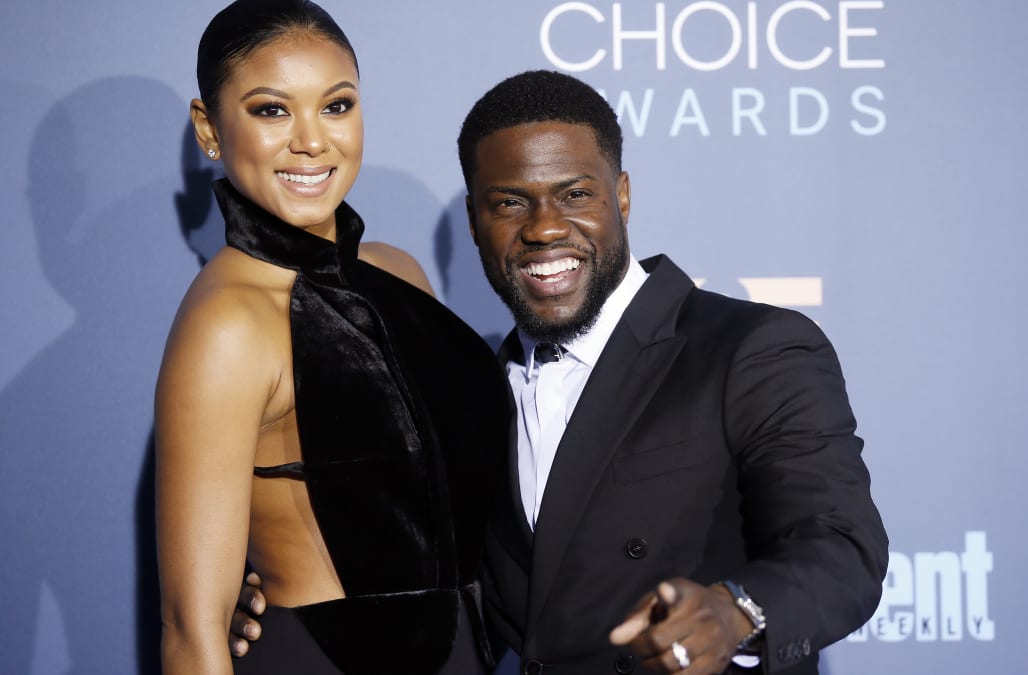 The 38-year-old comedian isn't entertaining rumors that he's cheating on his pregnant wife, Eniko, after photos surfaced of him seemingly getting close to another woman.

RELATED: Kevin Hart Laughs Off 'BS' Rumors That He Cheated on His Pregnant Wife, Eniko Parrish

"It's absolutely not true," Hart tells ET's Kevin Frazier. "It's Miami, the clubs close at 6 a.m., so I was actually going home early."

Hart's comment comes after photos and video surfaced early this week of him with other women outside of a Miami Beach hotel at around 5 a.m. on July 3.

26 PHOTOS
Kevin Hart out and about
See Gallery

This isn't the first time Hart has been accused of cheating. His first wife, Torrei claimed Eniko was his mistress during their marriage, and in an interview with ET earlier this year, Hart was open about his part in their split. "With my ex-wife, I was really real about what I did," he said. "I messed up."

Hart appeared to address the new cheating allegations on Wednesday, posting to Instagram, "At the end of the day, you just gotta laugh at the BS."

The comedian and his wife, who married last August, announced in May that they're expecting a baby boy. See more in the video above.

Rachel Uchitel famously bedded Tiger Woods and was the most famous mistress in his high-profile string of affairs. Uchitel now lives in NYC and has a daughter. She owns a children's boutique.

Rielle Hunter became a national headline when she hooked up with Presidential nominee John Edwards during his 2008 bid for the White House, and became pregnant with his child. Edwards was married to his wife, Elizabeth. His bid imploded once news broke that she had his baby and was in hiding. Edwards and his wife split and she died in 2010 from cancer, but Rielle never really recovered from things. She's been largely out of the spotlight after her tell-all book bombed and Edwards has moved on.

Marla Maples essentially ended the marriage between Donald Trump and his first wife, Ivana Trump. She and Ivana had a famous confrontation on an Aspen ski slope. She married the then-real estate mogul on December 20, 1993, at The Plaza Hotel in New York City shortly after he had divorced. They had one child together, Tiffany, who was active on Trump's campaign. These days Marla has a net-worth of nearly $20 million and a successful career of her own as an actress.

As a young White House intern, Monica Lewinsky made headlines after she had an affair with a much-older President Bill Clinton. Lewinsky never has escaped the spotlight after the D.C. scandal, but she has written a book, launched a handbag line and studied a master’s degree in social psychology at the London School of Economics.

Ashley Dupré was the New York City mistress and call girl who brought down New York Governor Eliot Spitzer. After it was revealed that he spent boatloads of money on her, Spitzer had to leave office. Dupré went on to have a baby girl and marry her child's father, 'Thomas ‘TJ’ Earle in Paris in October 2013.

Tattoo artist Kat Von D was a minor celebrity in her own right with her show "L.A. Ink," but she later became famous for breaking up the marriage of America's Sweetheart Sandra Bullock. Von D hooked up with Sandy's husband, Jesse James, and they later became engaged, but eventually broke up after he (surprise!) cheated. These days she continues her work as a tattoo artist and has a successful beauty line.

Sure, Camilla, Duchess of Cornwall, started out as the "other woman" and famously stole the affections of Prince Charles from Princess Diana, but after the two divorced she got what she came for. Camilla and Charles married in 2005 and have been blissfully happy for years. She's now a patron of many charities and the grandmother to Princess Charlotte and Prince George.

This one hurts! Kristen Stewart became the other woman when on July 17, 2012, she was caught cheating on her boyfriend Robert Pattinson with her "Snow White and the Huntsman" director Rupert Sanders. Sanders was married to model Liberty Ross and they had a family. Now, Stewart is happily dating her girlfriend, Alicia Cargile.

Carla Bruni-Sarkozy is married to the former French President Nicolas Sarkozy now and has a great modeling and singing career. But long before that she was bedding Mick Jagger and was part of the reason he eventually broke up with his wife, Jerry Hall.

Sienna Miller was the ultimate cool-girl, but she became known as a bit of a paramour when she had a very public affair with married actor, Balthazar Getty. Her behavior, she admitted, burned a lot of bridges. Miller is now a mother and has continued her acting career.

Luciana Gimenez Morad  was at the center of a scandal when Mick Jagger's wife, Jerry Hall, found out that he had fathered a child with a Brazilian model. Hall filed for divorce almost immediately. Morad lives in her native Brazil and is a TV host and married mother of two.

Gennifer Flowers will always be connected to Bill Clinton after she admitted to a 12-year affair with the former President. Flowers has written several tell-all books and has worked off and on as a singer in New Orleans.

NFL player and commentator Tiki Barber's marriage ended in a flurry of bad headlines after news broke that he cheated on his wife with his much-younger assistant. She and Barber eventually married and have a daughter, Brooklyn, together. All's well that ends well.

Ethan Hawke and Uma Thurman's marriage ended in 2005 after he cheated on her with their nanny, Ryan. But clearly it was more than just a spout of in-the-moment passion since Ethan and Ryan have been married since 2008 and happily live in Brooklyn together.

Brigitte Nielsen was an unknown mistress until recent years when it was revealed that she hooked up with Arnold Schwarzenegger during his marriage to Maria Shriver. The "Rocky" actress, of course, has maintained a successful movie and modeling career.

Arnold couldn't keep it together! In 2011, news broke that the California governor Arnold Schwarzenegger had an affair with their nanny, Mildred Baena, and had a secret love child, Joseph. The news ended his marriage to Maria Shriver and landed him in very hot water. Mildred lives in California not far from the family, and her son, now has a close relationship with his dad.