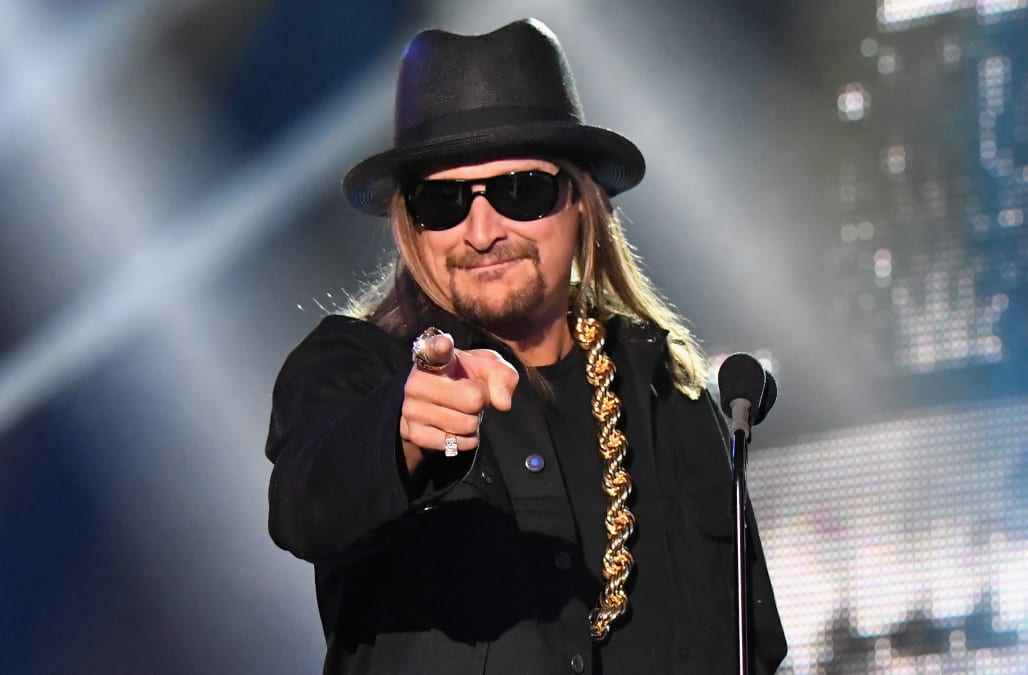 With just over a week to go before the filing deadline, Kid Rock has not yet officially confirm that he's running for Senate in Michigan, but he has taken one very important step forward in his potential political bid: he's got swag. As any budding Senator knows, in addition to building a platform that addresses such pressing issues as the economy, health care, climate change and the proper way to set up a truck bed swimming hole, you have to get in the pit and try to sell some stuff.

With a 20-plus year career in music full of eminently quotable lyrics, Rock has also thrown up a series of slogans that put Make America Great Again to shame. Among them: You Never Met a Politician Quite Like Me, Get in the Senate and Try To Help Someone, Pimp the Nation, Born Free, Party to the People, Welcome to the Party, I'll Rock the Party and In Rock We Trust.

On Monday (July 17), Rock also posted a tweet with what amounts to a summary of his potential stump speech, believed to be the first one in modern history to include a reference to butts. "I believe if you work your butt off and pay taxes, you should be able to easily understand and navigate the laws, tax codes, health care and anything else the government puts in place that affects us all."

Rock has been deflecting claims that the purported run might just be an elaborate promotion for a new album or his upcoming 2018 tour, though he did drop two new all-American tracks on Friday (July 14), "Po-Dunk" and "Greatest Show on Earth," that got tongues wagging again about a possible music tie.

Rock appears poised to take on Democratic Michigan Senator Debbie Stabenow in the upcoming mid-term election. After being met with skepticism about his intentions, Rock responded on Thursday (July 13) by writing "it's not a hoax, it's a strategy and marketing 101!"