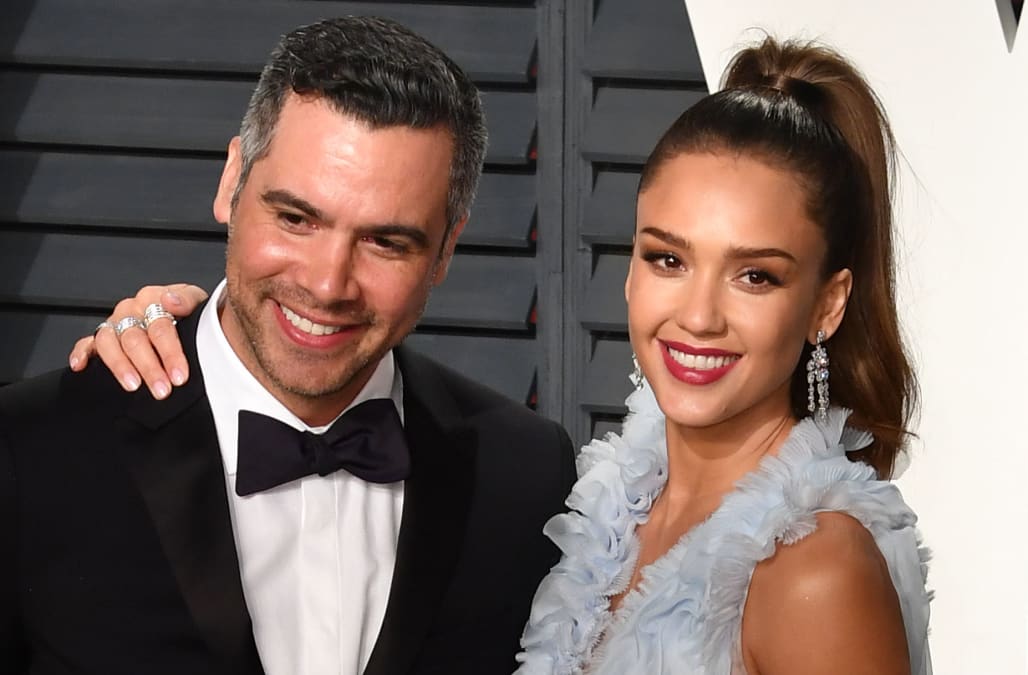 The actress took to social media on Monday to share the unexpected news with her fans that she and husband Cash Warren are expecting their third child together.

SEE ALSO: Country singer Garth Brooks gifts honeymoon to couple who got engaged at his concert

The Honest Company co-founder revealed the exciting news with an adorable Boomerang featuring her, Honor and Haven holding giant balloons shaped in the numbers 1, 2 and 3.

"@cash_warren and I are officially going to be outnumbered #babyonboard#herewegoagain 👶🏼🤰🏽 #blessed🙏," she captioned the post.

Jessica Alba'a Style Transformation
Jessica attends the "Apt Pupil" Premiere on October 6, 1998 in a perfect-for-fall outfit, with dark colors from head to toe.
At the "Never Been Kissed" Premiere, we're not surprised to see Jessica in this classic late-'90s, early 2000s style.
Jessica wore this floral maxi dress to the 27th Annual People's Choice Awards.
Alba embraced winter whites for the Golden Globe Awards.
Casual and sheer was all Jessica needed for a great VH1 Big in 2002 Awards outfit.
Jessica wore this fitted halter to the Elton John AIDS Foundation's 11th Annual Oscar party.
Alba wore a white top and jeans to the 2003 ESPY Awards.
We love the pop of red on this strapless dress for the 4th Annual Latin GRAMMY Awards.
Jessica Alba in a Louis Verdad Dress during SKYY Vodka and Maxim Magazine Party.
Jessica chose a lime green ruched dress for the VH1 Divas Benefitting The Save The Music Foundation.
Jessica went for a summery vibe during The 2004 Teen Choice Awards.
Red and strapless is the perfect dress for the "Sin City" Premiere.
Jessica looked stunning during the 2005 Cannes Film Festival Premiere of "Sin City."
Jessica chose a dress embellished with pretty butterflies for the 2005 MTV Movie Awards.
Jessica Alba attended the "Into the Blue" Premiere in a tea-length strapless dress.
Jessica wore this champagne lace, open-backed dress to the Academy Awards, and was a show-stopper.
Jessica looked lovely in this silver strapless dress during the "Costume Institute Gala" at the Met.
One of our favorite combos: black and gold.
Alba wore this classic look to the 7th Annual El Sueno De Esperanza Gala.
Jessica was glowing in this feathered strapless gown at the 80th Annual Academy Awards.
Jessica debuted new bangs with this intricately-adorned black gown at the Keep A Child Alive Organization's 5th annual Black Ball.
Jessica attended the Film Independent's 2009 Independent Spirit Awards and looked positively lovely in this lavender dress with her bright floral clutch.
Feminine ruffles are always in style, and Jessica went for a classic look of black and white.
Continuing the black and white look, Jessica wore this dress with an interesting neckline to a book launch party.
We love the dress, but we are totally distracted by that bling!
Between Jessica's amazing hair cut, dress and platform heels, her outfit for the "Valentine's Day" Los Angeles premiere was a huge win.
If anyone can pull off this tight leather dress, it's Ms. Alba.  She looked amazing!
Jessica attended the 2010 White House Correspondents Association Dinner in a gorgeous peplum gown.
Jessica chose a gold and black sequined dress for a screening of "Machete."
We can't get enough of Jessica's dress for the BAFTAs, and the perfect pop of red on her lips!
A pregnant Alba looked stunning for the CFDA Fashion Awards.
In a fun twist on a classic dress, Jessica sparkled at the Glamour Women of the Year Awards.
Jessica looked lovely at the Golden Globes in this lavender embellished gown.
Metallic was (and still is!) very in, and Jessica rocked this dress for the Costume Institute Gala.
We love a girl that makes bold fashion choices, and this dress is certainly one of those.
One of the most talked about -- and loved -- dresses from this year's Golden Globes, Alba hit it out of the park with this coral gown.
Sleek from head to toe, Jessica looked gorgeous in this ensemble for the opening of Tommy Hilfiger's L.A. Flagship store.
One of our "hits" of the night, Jessica looked gorgeous as always in this flirty pastel dress at this year's Kids Choice Awards.
Could she be any more flawless?
Alba attended the Baby2Baby Gala in what may be our favorite dress of 2013 - of all the dresses worn by anyone.
Always chic, Jessica killed it at the Christian Dior 2014 Autumn/Winter show at Paris Fashion Week.
We loved Jessica's crop top and high waisted skirt at this year's MTV Movie Awards.
Up Next

Alba and Warren met on the set of "Fantastic Four" back in 2004 and married four years later in 2008.

In recent years, Alba has shifted her focus from acting to growing her Honest Company, which she co-founded in 2011 in an effort to emphasize non-toxic household products. As of two years ago, the wildly successful company was valued at over $1.7 billion.

Though it's unclear how far along Alba is in her pregnancy, it's possible that she'll join the long list of celebrities that have welcomed children in 2017 already. On that growing list? George and Amal Clooney, Bradley Cooper and Irina Shayk and Hoda Kotb.

See all the 2017 celebrity baby births in the gallery below:b