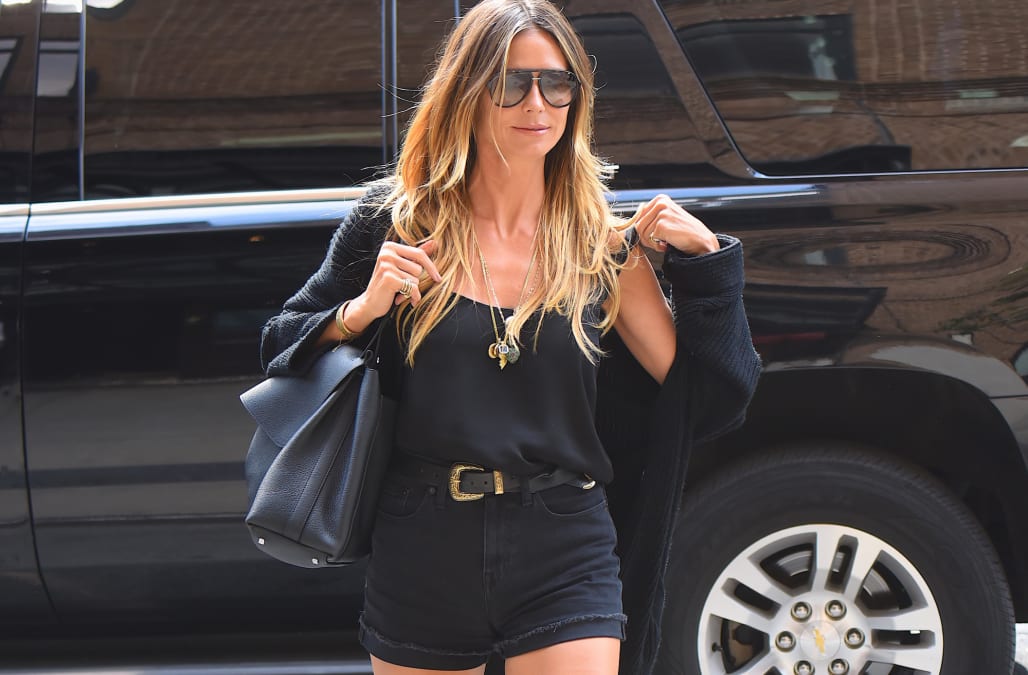 Antonio Banderas hit the beach in Ischia, Italy, with his stunning girlfriend, Nicole Kempel, and showed off his bod as he sunbathed. But their hot interactions on the beach weren't the only things turning heads this week.

Heidi Klum reminded everyone about the legs that made her catwalk famous as she strutted through New York City in a set of black jean shorts and a simple black blouse. The "America's Got Talent" judge was a total knockout in the otherwise simple style.

Miranda Kerr put her best foot forward in a flirty, white dress at an event, and continued her hot streak donning classic silhouettes.

Pink has been popping up all over the Big Apple in a series of "Sex and the City"-worthy looks, but by far her sweetest ensemble was a striped dress with a simple black blouse. The colorful look was breezy and beautiful.

Check out our favorite celebrity sightings of the week below:

Celeb Spotter 025: Miranda Kerr, Antonio Banderas and more
Miranda Kerr twirled in a flirty white dress and simple heeled sandals at an event. The former Victoria's Secret model continues to wow with her classic style. (Photo by Jun Sato/WireImage)
Antonio Banderas and his young girlfriend Nicole Kempel are seen were spotted soaking up the sun in Ischia, Italy. (Photo by Pretaflash/GC Images)
Heidi Klum had legs for days in a set of jean shorts and a simple black blouse and blazer. Lookin' good, girl! (Photo by Robert Kamau/GC Images)

Jaime King was a stunner in a burgundy shift dress as she attended an event in Los Angeles.

She's a Big Apple babe! Pink looked lovely in a striped skirt and black blouse as she headed into Sony Studios in NYC.

"The Big Bang Theory's" Mayim Bialik showed off her science side in a tan tunic and hat to promote The Homoschlepiens campaign with SodaStream, bringing awareness to plastic bottle pollution.

The Duchess of Cambridge's mom, Carole Middleton, looked pretty in a blue patterned dress at Day 9 of Wimbledon.

Bringing back the '90s? Kim Kardashian rocked some Adidas shorts with a white tank top as she headed out of a photo shoot in New York City.

Chicago Cubs player and Mastercard ambassador Anthony Rizzo using his Masterpass to buy lunch for young cancer survivors at Marlins Park in Miami, FL in an effort to generate awareness of the Mastercard partnership with Stand Up To Cancer and the annual “dine out” campaign.