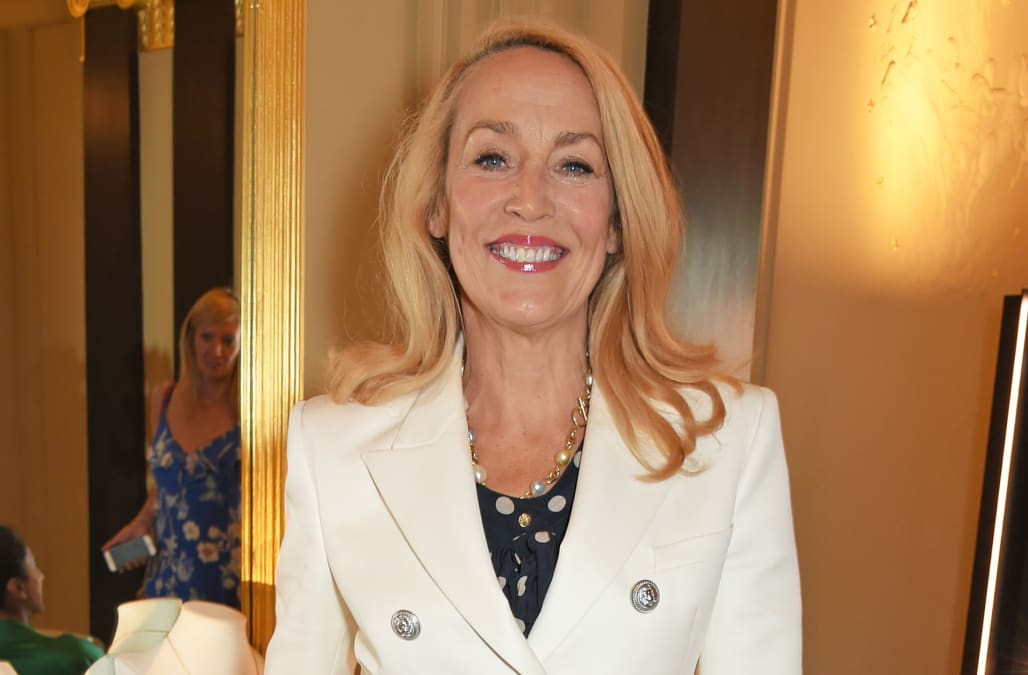 Jerry Hall, 61, was recently spotted in St. Tropez, and her ageless appearance definitely dropped some jaws. The former supermodel stole the show the moment arrived at the ultra-trendy Club 55 in a super chic beach look -- a baby blue mini dress that she paired with chic sunnies and metallic slides.

Hall, who boasted 40 magazine covers by the time she was only 21 years old, put her model figure on display and flashed a big smile as she went for a stroll along the beach.

A look back at photos early on in her career, many of which were taken with ex Mick Jagger, prove she hasn't aged much!

Jerry got her start in the modeling industry after being discovered by fashion agent Claude Haddad while sunbathing in St. Tropez.

By 1977, Hall had been on 40 magazine covers, including Cosmopolitan and Vogue. With her statuesque figure, bombshell blonde locks and million-dollar smile, it's no surprise Jerry skyrocketed to fame.

That very same year, she met Rolling Stones frontman Mick Jagger. Their relationship was nothing short of passionate and they spent much of their time together. Mick and Jerry were often seen at the hottest spots all over the world, including Studio 54 and 21 Club in New York City. They held a marriage-like ceremony in 1990, but it was later declared invalid by the High Court of England and Wales.

The two broke up in 1999, with Mick's alleged infidelity as the cause of the split. They have four children together -- Elizabeth Scarlett, James Leroy, Georgia May and Gabriel Luke.

Sixteen years later, in 2015, rumors that Hall was dating businessman Rupert Murdoch emerged. They announced their engagement in January 2016 and then tied the knot just a couple of months later.

While Jerry is best known for her colorful personal life and successful modeling career, she actually has a few acting roles to her name. She had small roles in major films like "Urban Cowboy" and "Batman." Jerry has also appeared on the silver screen, guest starring in shows like "Cluedo" and "The Detectives."

Check out the video above to see what Jerry looks like now!

More from AOL.com:
Kourtney Kardashian recycles sister Khloe's sexy one-piece as she turns up the heat with Younes Bendjima
Shay Mitchell goes topless on the beach in Greece -- see the pic!
Brad Pitt has never looked hotter while grabbing iced coffee in LA