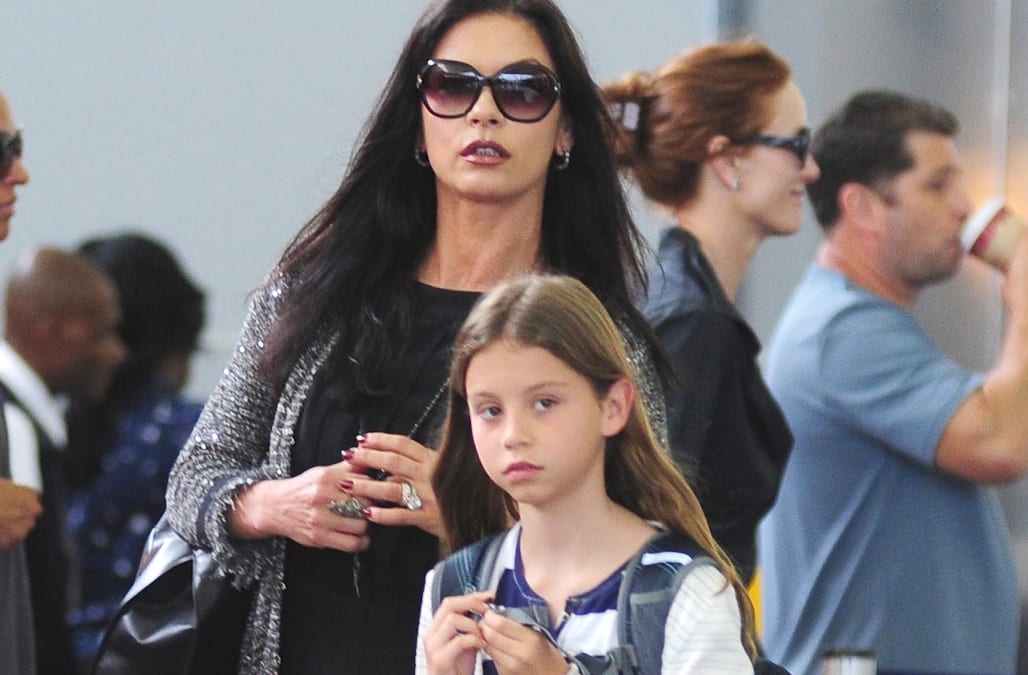 She got it from her momma!

Carys Douglas was recently spotted with her famous family -- parents Catherine Zeta-Jones and Michael Douglas and older brother Dylan -- out at dinner in Malibu. Photos obtained by DailyMail gave a rare glimpse into the family of four's tight-knit bond. Of course, Michael, Catherine and their two teenagers were impeccably dressed for the Nobu outing.

While Catherine and Michael's presence is definitely enough to turn heads, it was their teenage daughter who stole the show. We just can't get past Carys' striking resemblance to her mother!

Carys Douglas, Catherine Zeta-Jones and Michael Douglas' daughter
sick bro
missing this more then ever💗
tropic like it's hot🌴
turning the city upside down #govballnyc
one year since the best night of my life⭐️#cocoforcarys
⭐️⭐️⭐️⭐️
thank you mummy for endless laughs💗 I love you endlessly. Happy Mother's Day⭐️
NYC roots
❣️❣️
those pesky kids
baywatch
Hey New York, I think we should see other people...
smiles for spring
smiling 4 Cam
gnna miss this city
hola señorita
hello mexico :)
Up Next

Given her beauty, it's clear that Carys will have a future in show business. Of course we had to investigate, and it turns out the 14-year-old beauty is somewhat of an Instagram star. Carys already boasts an impressive 11,000 followers -- not bad for someone who's not even in high school yet!

Just a quick glimpse at her feed proves she definitely has what it takes to be a star. A slew of solo photographs showcases her million-dollar smile, which she definitely inherited from her momma, and her impressive posing skills. She's giving the Kardashian sisters a run for their hard-earned money.

Celeb Kids to Follow on Instagram
Amelia Gray Hamlin: Amelia Gray is Harry Hamlin and Lisa Rinna's teenager daughter. The gorgeous gal is an aspiring model and has been signed by IMG Models and when she's not hanging out with her famous parents, she's often posting fun pics of her travels. Follow her on Instagram at @ameliagray
Holly Ramsay: Chef Gordon Ramsay also has a teenage daughter, Holly. On Instagram attends quite a few fun events with her dad. Follow her on Instagram @hollyramsayy
Sierra Fisher: The gorgeous daughter of celebrity host Brooke Burke-Charvet and famous plastic surgeon, Dr. Garth Fisher, definitely leads a pretty sweet life. Sierra enjoys lots of fabulous vacations and hanging out with her friends. Follow her on Instagram at @sierrafisher
Jack Ramsay: Gordon Ramsay's teenage son, Jack, is the spitting image of him and also just as athletic. Jack enjoys cycling, triathlons, playing water polo and more. I mean, how cute is his Instagram profile? Follow him at @jackramsay199
Kaia Gerber: Kaia is the stunning daughter of model Cindy Crawford and Rande Gerber -- and it's pretty clear she inherited her mom's good looks. Not only as the California-bred teenager making waves in the modeling industry, she also has tons of followers on Instagram. Check it out and follow her @kaiagerber
Presley Gerber: Kaia isn't the only one with good genes and a modeling career in the Crawford-Gerber family. Cindy Crawford's son, Presley, is extremely handsome and has been building quite the following from Milan to Malibu. Follow him on Instagram @presleygerber
Ava Phillippe: Reese Witherspoon literally has a mini-me. Reese's daughter, Ava, whom she had with Ryan Phillippe, looks exactly like her -- but she's got her own fun identity on social media. From posting sweet pics at In'N'Out to sharing photos of her drawings, Ava has her own creative side. Follow her at @avaphillippe

Sosie Bacon: Kyra Sedgwick and Kevin Bacon's daughter Sosie is not only adorable, but talented. Sosie is in her mid-20s and creating a career of her own, most recently starring on Netflix's "13 Reasons Why." Follow her on Instagram @sosiebacon

Brooklyn Beckham: Not only is David and Victoria's son, Brooklyn, starting a career of his own as a model, he's also quite the world traveler. His Instagram is the perfect mix of hipster and cool globe-trotter. Follow him on Instagram @brooklynbeckham
Connor Cruise: The adopted son of Tom Cruise and Nicole Kidman definitely grew up. Connor, who is now a DJ, spends a lot of time in Europe and apparently likes to fish! Follow him @theconnorcruise
Lily-Rose Depp: Lily-Rose Depp is an aspiring model and actress and the famous daughter of Johnny Depp and Vanessa Paradis. Lily-Rose documents all of her fun, travel and movie premieres on her Instagram @lilyrose_depp
Willow Smith: The daughter of Will Smith and Jada Pinkett-Smith is quite the artist. When she's not working on movies, Willow enjoys travel, drawing and learning to play instruments. Follow her on Instagram @willowsmith
Brandon Thomas Lee: He's the spawn of Pamela Anderson and Tommy Lee, and it' safe to say that he's got a pretty sweet life. Brandon traveled all over Europe, hit the Met Ball and more this year. Follow him at brandonthomaslee
Justin Dior Combs: Sean "Diddy" Combs has a very handsome son, Justin, who was a football standout and played at UCLA. These days Justin is showing off his fit physique on his Instagram @princejdc
Iris Apatow: Iris is the daughter of Judd Apatow and Leslie Mann and has appeared in quite a few of her parents' movies. She also is a globe-trotting teen who shares lots of her fun travels on Instagram. Follow her @irisapatow
Maude Apatow: Maude is also the daughter of Judd Apatow and Leslie Mann and an accomplished actress. Maude starred on "Girls" in 2015 and has been busy working on her acting career. Follow her @maudeapatow
Up Next

Judging by the abundance of tropical photographs, Carys also loves showing off her body in some teeny bikinis. Could a career as a Victoria's Secret model be in her future?

With successful parents like Michael and Catherine giving her advice, we're sure that the brunette stunner definitely has a successful Hollywood career ahead of her.

For now, her fun Instagram photos will do! Check out more of Carys' enviable life in the slideshow above.