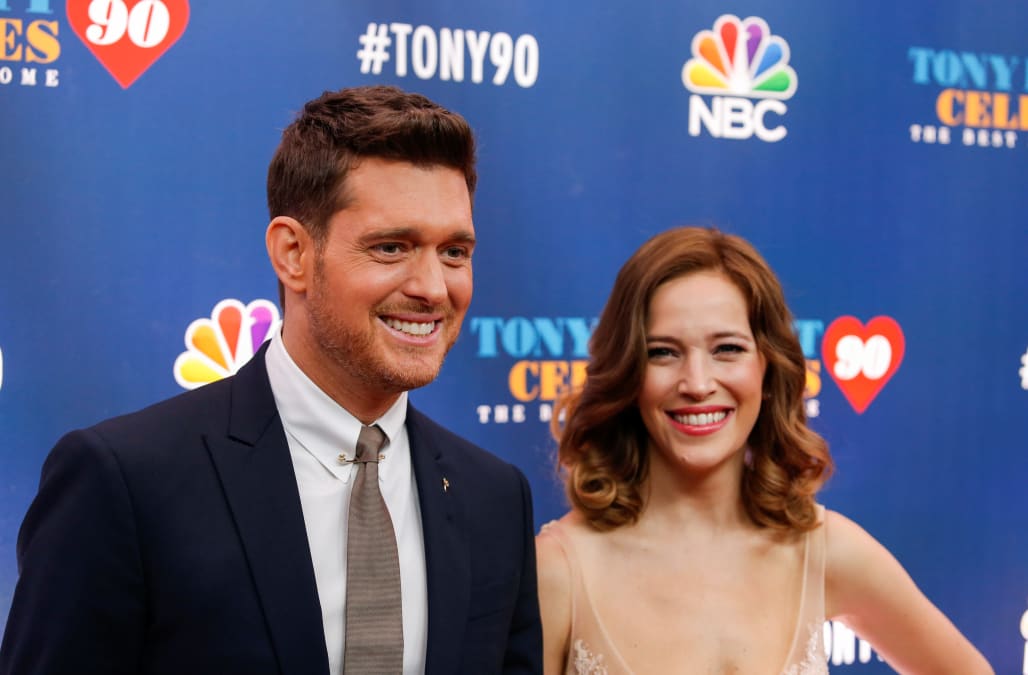 Michael Bublé is thankful for his family every day.

The 41-year-old singer accepted the National Arts Centre Award in Ottawa from the Governor General of Canada on Wednesday, his first public appearance since his 3-year-old son, Noah, was diagnosed with cancer last November. In his heartfelt speech, Bublé thanked his family, and got emotional when describing what they've been through these past few months.

"My entire life has been inspired by how my family has made me feel -- my wife, my children, my parents, my sisters," he said, after reading the Maya Angelou quote, "People will never forget how you made them feel." "There are no words to describe how I feel about you. Sometimes 'I love you' just isn't enough."

Michael Buble on Instagram
Feliz día de la madre !! Happy Mother's Day @luisanalopilato !! #myhero #bestmommy #bestfriend
This is how the new tour begins. Off to rehearsals. We're coming to a city near you !!! #getready #2017 #mbtour
Celebrating this birthday with my favorite people !! Memories are made of this. #family #41 #starwars
Out for a walk in Melbourne with my buddy... #chicmagnet #mbworldtour #australia #showday #tourfamily
The boys are chilling and feeding the ducks today. #daffy #donald #howard #AFLAC #leavenoduckbehind #quack
I woke up to this when I walked outside this morning. Thanks Luisana Lopilato You make me feel very loved #happyfathersday #cookies #luckyman
Today is my favourite day of every year. It reminds me of the best decision I ever made in my life. Happy anniversary mi amor. #number4 #manymore #greatlifechoices #love #lottery @lulopilatophotos
The boys chillin by the pool while mom is on set working #mrmom #happyplace #family
CANADÁ Y ARGENTINA UNIDOS !!!! #vamos #eh #proud #orgulloso #minimessi
Back to work !!! Early morning phone interviews for Dubai and South Africa. I'll try not to put my foot in my mouth... #work #family #balance #sellmortimersell #MBworldtour
In my happy place with my favourite human ever. #cruisinwithmyboy #paradise #vacation #family
Oh boy did we party hard last night !! Like father like son hahha !!! thanks @lulopilatophotos for the pic #jetlag
Happy international jazz day !!! To celebrate I've decided to play flight of the bumblebee on a babies foot. #jazz #improvising #music #internationaljazzday
I love this girl from Singapore to the moon and back. That's a really long way you know #mykidsmom #milf #luckydude @lulopilatophotos
Took my godson Logan to the Giants game ! What a great kid !! #boysnightout #unclemike #meandmyshadow #latergram #vancouver #giants #hockey #whl
Happy Canada Day, Eh! #mbworldtour #Ottawa @lulopilatophotos #Noah
On the plane and off to Shanghai ! Why do I feel like this might be a long flight ? #mrmom #jettlagged #helplu #MBworldtour
Good morning from beautiful Vancouver ! #home #meandmyshadow
Up Next

The National Arts Centre Award is presented each year "in recognition of recent exceptional work by a performing artist." Previously, Bublé had canceled a number of public appearances since announcing Noah's cancer battle.

"I stand here truly humbled that I have been allowed to be one of your musical representatives and that you would choose to bestow this honor upon me during what has been an emotional and difficult time for my family," Bublé said on Wednesday. "I thank you for the love and support that you've given and for the pride I'm filled with every single time I'm able to stand on a stage and say, 'My name is Michael Steven Bublé and I'm Canadian.'"

"When things like what happened to us occur, you take on life changes," Lopilato said at a press conference in Buenos Aires for her film, Those Who Love, Hate. "It happened to us. Now I value life much more, the now and the today."

"My son's recovery is a long process as you all know, and he has to continue with check-ups," Lopilato, who also shares 1-year-old Elias with Bublé, continued. "But we are very happy. We are looking forward to thinking about the future, to seeing our children grow."

More from ET Online:
Liam Payne Gets Down While Performing 'Strip That Down' in U.S. TV Solo Debut
Blac Chyna Snapchats Her Workout Just Like the Kardashians, Teases Music Video With Tyga and Son King Cairo
EXCLUSIVE: *NSYNC Star Joey Fatone Opens Up About Daughter Kloey's Autism: 'It Has Tested Us a Lot'